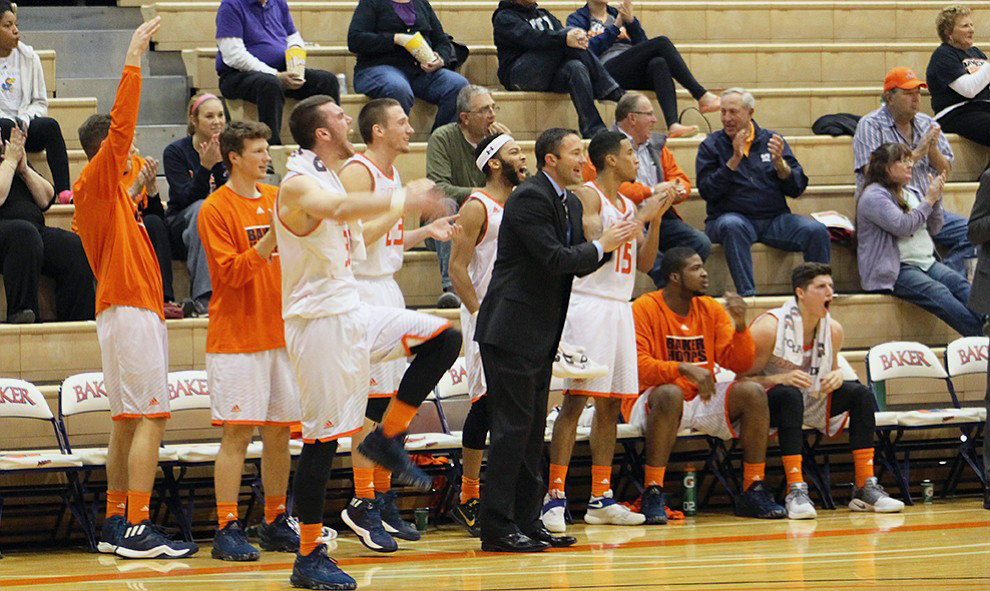 After defeating Avila 73-52 at home on Monday night, the No. 13 Baker women are off to a 6-1 start overall and a 4-1 start in the Heart of America Athletic Conference for the second consecutive season.

Meanwhile, the Baker men beat Avila for the second-straight time, 87-60. Following the win, the Wildcats are 4-4 overall and 2-3 in conference play, including a home win over No. 3 William Penn on Nov. 19.

Including last season’s run to the national championship game, the Baker women have won 15 of their last 18 games overall.

The Wildcats had to replace three All-Heart of America Athletic Conference performers from last season, but seniors Kelsey Larson, Sydney Buchel and Kenzie Cook have stepped up and played the best basketball of their careers through the first seven games. All three are in the top four in scoring for Baker.

Larson leads Baker with 14 points per game and has scored in double digits in five of her seven games. She set a career-high with 19 points at Central Methodist on Nov. 16 in Baker’s lone loss of the season. Larson was 3-for-3 from beyond the arc when Baker set a school record for 3-pointers made in a game (15).

Cook is third on the team in scoring and set a career high with 16 points against Avila on Monday in Baker’s 73-52 win. She’s also first on the team in rebounds with eight boards per game, filling in nicely for Macy Wallisch’s 8.4 rebounds per game from a season ago.

Buchel has become one of the team’s best all-around players, scoring nine points per game, grabbing seven rebounds per game and blocking 12 blocks on the season.

Baker opened the season with two wins in the Heart/KCAC Classic over Ottawa and Saint Mary, then immediately began conference play with road games at Clarke and Central Methodist. The Wildcats were outscored 21-3 in the second quarter against CMU, the reigning conference regular season champions, but still had a chance to tie at the end of the game. Baker lost 69-66, but the Wildcats have been perfect since, beating William Penn, Missouri Valley and Avila in the next three games.

After this weekend, Baker still has to play at No. 20 Columbia College on Dec. 7. Baker beat Columbia 80-71 in last season’s opening round of the NAIA national tournament, but the Cougars are 6-1, 1-1 on the season.

After the Columbia game, Baker will play seven out of its next eight games at home. Baker will host No. 11 Benedictine on Dec. 10. The Ravens are 6-2, 5-0 on the season. This will be the two teams’ first game since Baker beat BC 50-34 in the Fab Four. To wrap up 2016, the Wildcats will host 7-0, 2-0 Southeastern out of the Sun Conference and Lakeland, Florida.

At 2-3 in conference play, the men are looking for their first above .500 record in conference since 2011-12. The Wildcats are averaging 78 points per game this season.

Senior Javeion Gray is the team’s leading scorer with 12.1 points per game on the season, including a career-high 33 points in Baker’s loss to Central Methodist on Nov. 16. Gray followed that performance with 21 points in Baker’s win over William Penn.

Last season’s Heart Freshman of the Year, Clae Martin, is second on the team in scoring with 10.1 points per game. Martin leads the Wildcats in 3-pointers made with 19 and a 46 percent mark from beyond the arc.

The Wildcats are led by veterans in seniors Tyrome Parker and Taylor Johnson. Parker leads the team in rebounds with 5.1 per game and is second in assists behind Gray in only 22 minutes per game. Johnson is third on the team in scoring with 8.6 points per game.

The men are making 45 percent of their field goals, as well as 40 percent from the 3-point line. Their four wins came against Ottawa, William Woods, William Penn and Avila, and they’re a perfect 2-0 at home.

They will close out the 2016 half of the season with a home conference game against the Benedictine Ravens, who the Wildcats beat at home last season. Then they will host McPherson College on Dec. 31.