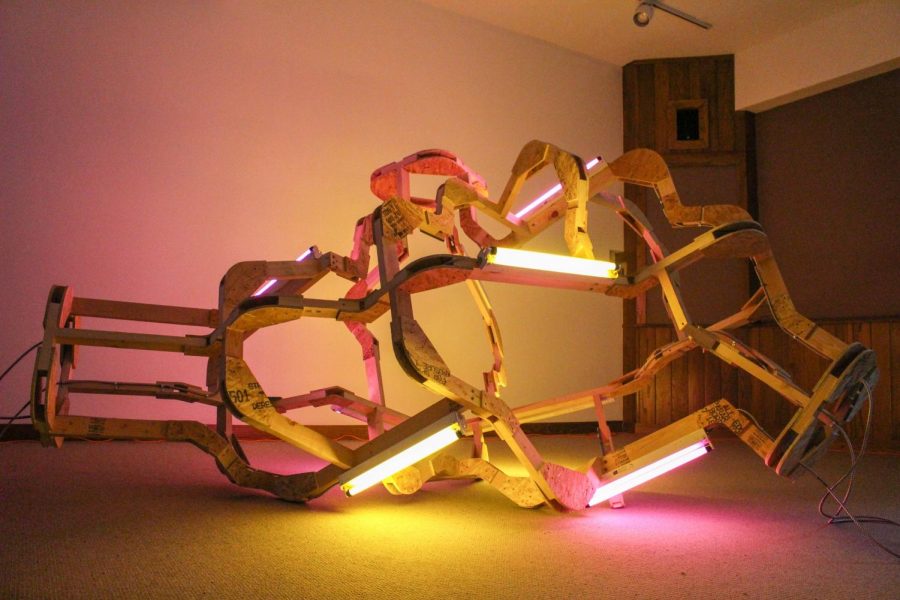 Holt-Russel Gallery hosts Mark Cowardin's art work. Cowardin titled the exhibit, "On the Bright Side." The exhibit consist of 11 pieces of artwork.

The Holt-Russell Gallery opens a new show Thursday Sept. 27 entitled “On the Bright Side” featuring sculptures from artist Mark Cowardin. The gallery is located on the second floor of Parmenter Hall.

Cowardin, whose main discipline is sculpting, focuses on the relationship between man and nature and how the two interact with each other, and not always in a positive way.

“To me, it was really interesting to see the points where humans and nature overlap,” said Cowardin, “I was stuck with the idea nature had been completely altered by people.”

Cowardin grew up in a rural environment and credits this background to his hyper-awareness of human’s influence over nature.

Not only does Cowardin reflect the relationship of nature and material, but the different dichotomies at play in his work. One being the fact he is human.

“I am human, and I need materials from nature to survive,” Cowardin said.

Cowardin also acknowledges the use of lights in some of his works. Inspired from consumption, they utilize electricity to be displayed. Also, there is the relationship between raw and refined materials in his work.

“On the Bright Side,” the title of the show is indicative of the way Cowardin feels about his pieces.

“This is a potentially sad topic since the pieces represent literal consumption, but I think I am an optimistic person by nature and very interested in balance,” said Cowardin, “and as a consumer I just want people to be aware.”

One major inspiration for the creation of some pieces in the show is from smoke rising from factories.

“If you sit and watch power plants in the winter, it’s magical,” Cowardin said.

Some sculpture displays in the show are what Cowardin described as “cloud forms,” and they were inspired by the smoke. Once again, Cowardin states he is fascinated that the smoke is pollution but how it is beautiful at the same time.

Cowardin has been working on his cloud forms for six years, and in the beginning, they were more comical than the products seen now.

Cowardin begins most sculptures by sketching first and then creating sculptures over those sketches. He calls his work as all observational.

A common material featured throughout the show is wood, including 2 by 4’s and reclaimed wood Cowardin has either harvested or scavenged. Most wood used in this show comes from a small town outside of Baldwin City.

“I love working with wood because it’s a living breathing medium,” Cowardin said.

In one work displayed, there are several lumps Cowardin said were created by natural knots in the wood. This comes from Cowardin’s ability to work inductively with his materials.

Assistant Professor of Art and the Director of the Holt-Russell Gallery, Russell Horton picked Cowardin to show his art because of the appeal his work has for multiple people.

“The over arching idea is to create a cross-curriculum learning experience and with  this show you have environmentalism with some hints of sociology,” said Horton.

Horton always tries to get artists of different disciplines displayed and in the past there have been paintings and photographs featured in the gallery.

After contact has been made to the artist about doing a show, the process of putting together the show begins.

This process includes lots of “nuts and bolts”, remarked Horton, including placing the works throughout the gallery where they will be near other pieces but have enough space to where viewers can experience the pieces individually.