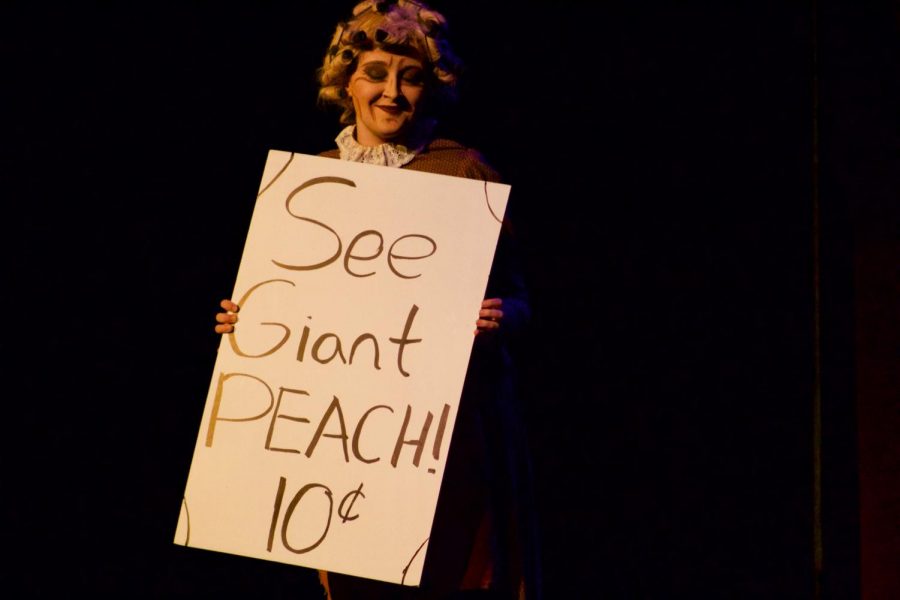 Freshman McKenzie Kuhlmann plays character Aunt Spiker during a scene in "James and the Giant Peach." The play was held Sept. 27-30 in Rice Auditorium.

The Theatre Department performed “James and the Giant Peach” for its first production of the year. The play opened Thursday Sept. 27 at 7:30 with performances the following Friday and Saturday. There was also a matinee performed at 2 on Sunday.

Based of the book by the same title, “James and the Giant Peach” follows the adventures of James as he escapes his self-aggrandizing aunts in a giant peach with the help of friendly bugs.

Tom Heiman, associate professor of theatre as well as the play’s director, has wanted to perform the play at Baker for a long time. Heiman worked on this play in the past and stated it is “one of the best shows” he has ever done.

“We have had real success with children’s shows in the past,” Heiman said.

With the recent renovations to Rice Auditorium the play can be performed on a thrust stage, so the audience is more engaged in the action. A new light board is also being used for the show.

Junior Shelby Corwine is operating the light board for “James and the Giant Peach”.

“We have had the lightboard for a year now and I did do a small project on it,” Corwine said.

Sophomore Barry Baker is the stage manager and enjoys the creativity other members of the crew put into the production.

“Shelby is the new light designer so it’s cool to see her ideas,” Baker said.

The play was very audience interactive with actors walking down the aisles and even a scene where audience member join in on the action.

“We are going to have people run out and the audience will help out with the evil plans,” Heiman said. “This will create total pandemonium which is what a kid’s show needs.”

Sophomore Emory Rhodda is an actress in the play and likes the chemistry between cast members.

“The cast is phenomenal, it’s so cool to work with people who are so talented but still really fun to work with,” Rhodda said.