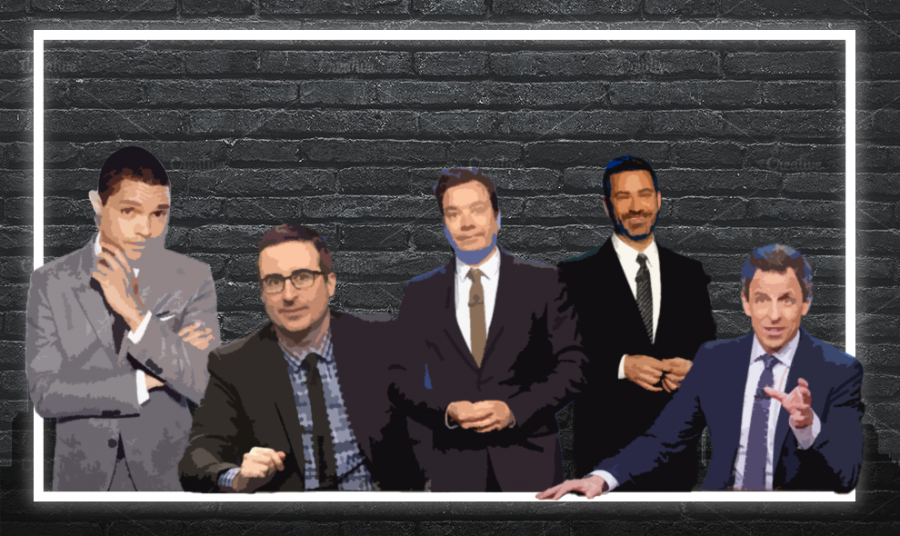 After the local news signs off for the night, the wonderful world of late-night television emerges. However, people who are new to the late-night scene, or even seasoned veterans, may not know every show’s unique programming and style.

Since Jimmy Fallon took the helm of “The Tonight Show” in 2013, the show’s ratings have risen, and several clips have gone viral on YouTube. Fallon’s style, while political at certain points, is consistently mild as he focuses on “fluff” content.   Overall, Fallon is good for people who want to get away from the news and laugh before going to bed.

Stephen Colbert’s “The Late Show” has been surging in ratings. Every night, Colbert’s monologue attacks the polices of the Trump administration. His snide remarks channel his frustration and turns it into a hilarious recap of the day’s news.

John Oliver’s debut show “Last Week Tonight” has been making waves since its premiere in 2014. Each episode, Oliver takes viewers on a deep dive into some of the bizarre and troubling problems America is facing. Though some may find the content dry, Oliver’s wit teamed with his sense of humor make any piece he does entertaining as well as informative. “Last Week Tonight” offers a unique twist on late night show structure. It opts out of interviews and favors bringing people’s attention to serious problems.

Though Jon Stewart left “The Daily Show” a few years back, the show still has a strong fan-base under the helm of Trevor Noah. Noah had big shoes to fill. Instead of copying Stewart’s style, he opted to bring his own flair.  Unlike his counterparts on other networks Noah chooses to not pay personal attention with cable news and is open to interviewing controversial figures such as Tomi Lahren, who he interviewed last year.

Jimmy Kimmel offers viewers the best of both sides to the late-night game. Kimmel’s show offers fun celebrity interviews to emotional monologues where, unlike most comedians, he puts aside the jokes and talk to the audience from his heart. These moments set him apart from other late-night hosts and have gained him an enormous following. Kimmel is unafraid in the criticism he gives politicians and often call on his audience to instigate change in the political system.

Making a comeback from his NBC debacle, Conan’s show on TBS perfectly showcases his witty one-liners and his unique take on situations. Though his monologues may not be as striking as Colbert’s or Kimmel’s, Conan has them all beat with going to remote locations and filming videos there. Conan is unafraid to take his show to other places, and he has filmed episodes in South Korea, Mexico and Germany, just to name a few. The authenticity in these episodes is apparent and often when Conan is interacting with people, no script, he is at his best.

So, whether you are a novice to the late-night game or a veteran looking to step outside of your comfort zone, any of the shows above are sure to delight and entertain.