Football falls to Benedictine at homecoming 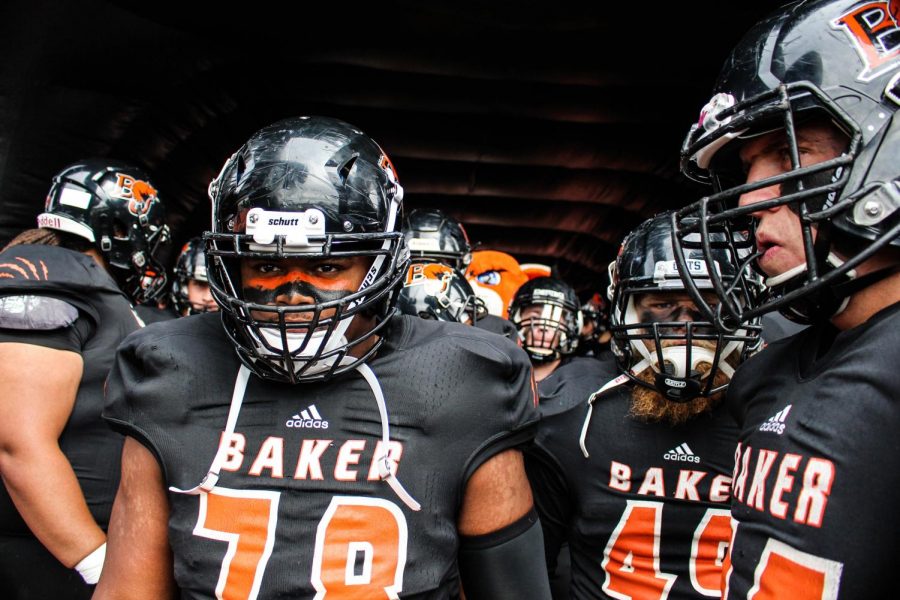 Freshman Don Hammers and the Wildcats stare down their rival, Benedictine College from inside an inflatable helmet as they enter Liston Stadium.

The No. 11 Wildcats took on No. 16 Benedictine College for the homecoming game Sept. 29. Baker fell short to the Benedictine Ravens 23-12.

The Ravens beat the ‘Cats on the ground as two different running backs carried for over 100 yards. Sophomore JD Woods tried to keep the ‘Cats in the game with 51 running yards and gave the ‘Cats its one lone touchdown. Sophomore quarterback Brandon Mueller threw for 243 yards yet was not able to find the endzone.

With the ‘Cats only down by a touchdown at halftime, both squads were held scoreless in the third quarter. This was followed by an exciting fourth quarter as the Ravens put up another touchdown to make it 23-10. The extra point attempt was blocked by senior Kegan Schumann and senior Nate McLaurin ran it back for two points to cut the Raven lead to 23-12. The ‘Cats defense was able to force two fumbles but the offense was unable to convert, making the final score 23-12.

After the loss, the Wildcats sit at No. 17 in the nation with a 3-2 record on the season. The ‘Cats will hit the road for three consequetive road games and will return to Liston Stadium to take on Missouri Valley College Nov. 3.