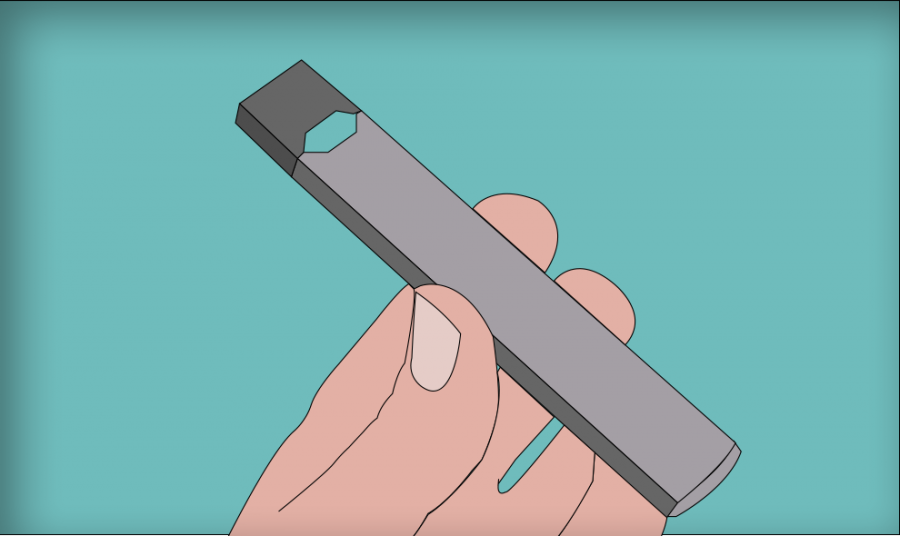 Chances are if you are a college student you not only know what a JUUL is, but you might be a habitual user or have taken a hit off of a friends at a party. The JUUL was originally created to help smokers find an alternative to cigarettes, according to their website. However, JUUL found another market in high schoolers and college students.

According to Truth Initiative the JUUL is a new e-cigarette, “JUUL devices heat up a cartridge containing oils to create vapor, which quickly dissolves into the air. The device is small enough to fit in a closed fist and has a sleek, tech-inspired design that resembles a USB flash drive.”

Resident Assistant Frank Sandavol said “it was not an issue before but now that more generations like millennials are getting used to it, it’s more of an issue.” –

Sandavol says there are policies in place that prohibit JUULing inside the University’s residence halls. During the 2017-2018 academic year, students’ vape pens set off the fire alarm in the New Living Center.

Personally Sandavol does not JUUL and was told by his father growing up not to use tobacco products. For him, the JUUL fell into the same category.

“Even though it might be vapor, it still has nicotine and products that get you hooked,” Sandavol said.

JUULs do contain nicotine and according to the product website, “One JUULpod is intended to last ~200 puffs. However, individual smoking and vaping patterns may vary.”

This is equivalent to one pack of cigarettes, if the JUULpod has a 5 percent nicotine concentration.

A student, who asked that her name be witheld, said that she typically JUULs in social settings, with friends. She does not consider herself a habitual user of the product and  started JUULing last semester.

Before she started JUULing, the student did not use any tobacco or nicotine products. She said she has mixed reviews of the product and has bought three different JUULs because they are easy to misplace due to their small size and sleek design.

“They are easy to lose and they are also really expensive. It sucks all the money out of your bank account if you are really dedicated to it,” she said.

Freshman Robert Huebert said he thinks that JUULs should not be allowed on campus. When asked what he thought when he sees other students JUULing after class Huebert said, “wow, that is pretty stupid.”