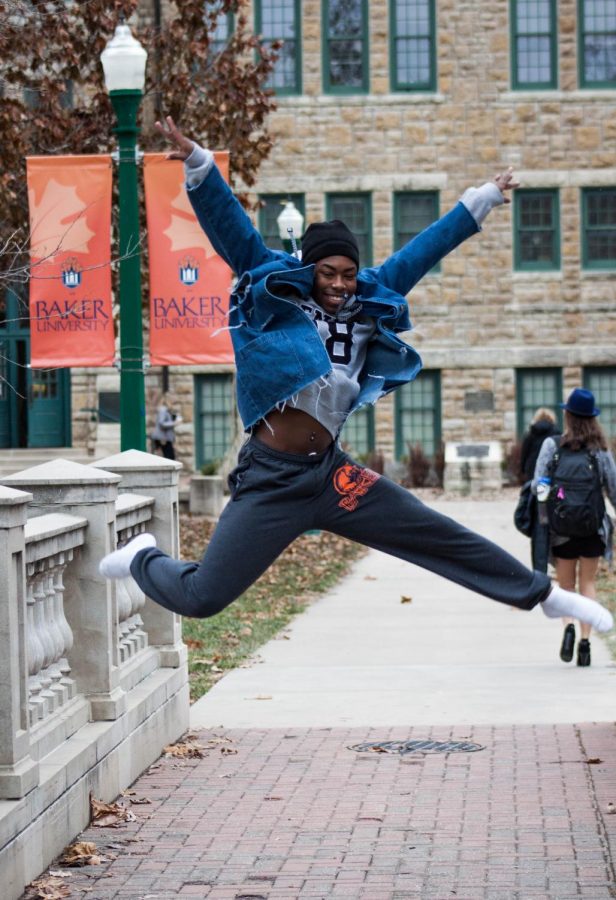 Freshman Stephen Long executes a jump on Taft Bridge on Nov. 30. Long is a member of the dance team including the competition team.

Dance helps freshman Stephen Long express his sexuality and embrace his personality. Dance also gave him the confidence to try out for the dance team at Baker. The multiple-time, NAIA-National-Championship-qualifying dance team welcomed Long as its only male dancer.

The dancers see him as just another member of the team, regardless of gender. “Just because I’m a boy doesn’t mean I have to differ from the girls,” Long said.

He is a part of both the 22-member squad and the 13-member competition team. Though he has only been dancing competitively for three years, Long has enjoyed dancing his whole life. As a cheer-team participant in high school, he sharpened his tumbling skills. He did not expect to dance at the collegiate level because it takes so long to master the sport. He says Head Dance Coach Lynsey Payne worked well with him and helped him adjust to collegiate dance.

“Stephen is a really talented dancer, so the fact that he’s a male isn’t the primary reason that I brought him in,” Payne said.

Payne says it was more of an afterthought that Long is a male because she judges who she recruits based on their dancing skills, not gender. According to Payne, dance team members need to be a good fit and have the same skill set that all the other dancers have, regardless if they are male or female.

Payne has noticed an increase in male participation within the dance world. She even noted the increase in popularity by referencing that the National Football League has introduced male cheerleaders on the Los Angeles Rams and New Orleans Saints squads.

“I try my best to treat him like any other member of the team,” Payne said.

“I’ve already seen him mature these past couple months and develop a stronger work ethic,” Prather said. “He likes being pushed to get better so we work well together.”

Dance helped Long embrace his femininity and sexuality throughout high school and made him comfortable with being himself. By being the only gay male in his family, he experienced some pushback when he first openly expressed his sexuality. Now his family is more accepting and loves him for himself, he said. Dance was able to help him through tough times, and he has been able to embrace everything that comes with being himself. Those that know Long always recognize his energetic, upbeat spirit. Prather admires the passion he brings to the team and says that he always “brightens everyone’s day, especially when they need it the most.”

“He definitely brings his own unique personality to the team and I think that’s probably what he’s most known for across campus,” Payne said.