Hedrick accredits Baker to his success 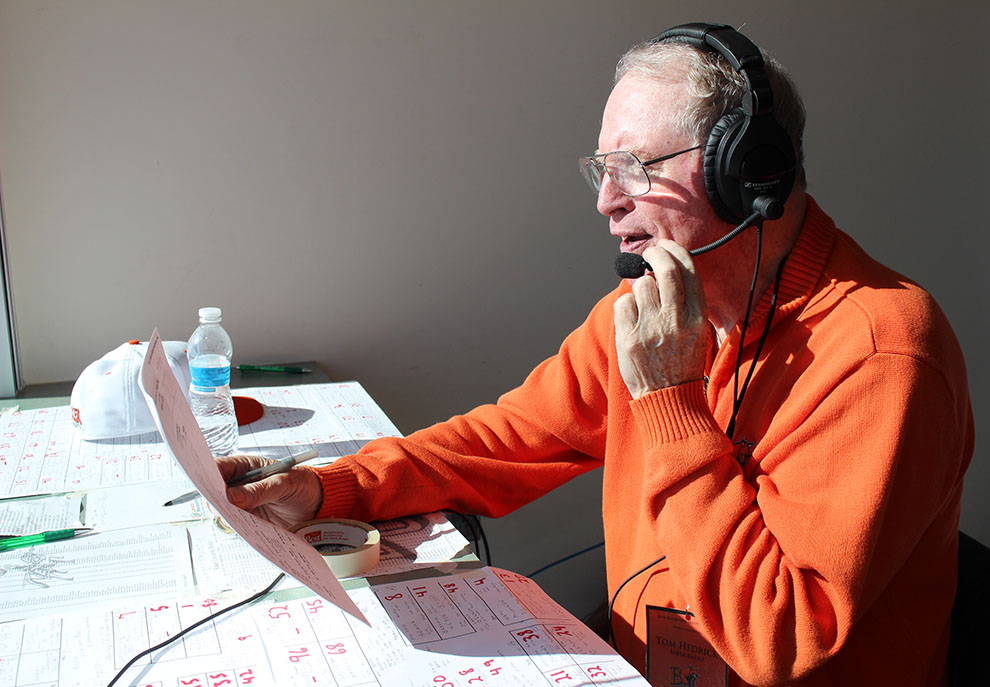 Tom Hedrick, the voice of the Wildcats, continues to broadcast Baker football and basketball games on KNBU-FM 89.7 in Baldwin City. Hedrick, a graduate in 1956, was inducted into the Baker Athletic Hall of Fame in 1978. Image by Jenna Black.

Tom Hedrick made the decision to be a sportscaster on his walk home from school after being cut from his high school baseball team his junior year. Over the course of his five-mile walk back, he planned what he was going to do with his life now that he lost hope of playing professional baseball. The first two miles of his walk, he settled on becoming a coach. The next two miles, he altered that plan to become a writer. Hedrick still remembers the exact spot on his walk where the idea hit him.

“By God, I’m gonna be a sportscaster…,” Hedrick recalled from that long walk.

Since then, Hedrick has made a lifelong career out of sports casting. He has been the voice of the Kansas City Chiefs, Cincinnati Reds, Texas Rangers, Dallas Cowboys, University of Kansas Jayhawks, Nebraska Cornhuskers and the Baker University Wildcats over the course of his 61-year-long career. He has also called Super Bowl I, II and IV, nine Cotton Bowls, and four Final Fours, to name a few accolades.

The 84-year-old Baker Hall of Fame inductee, Sports Broadcasting professor and current ‘Voice of the Wildcats’ recognizes that his time as a sportscaster is reaching the end. Hedrick uses the term “retire” loosely as he is looking at it as “phasing out.”

He acknowledges that he might stick around for next year’s football season, with the exception of opting out of the four-hour road trip to Culver-Stockton College and take on a baseball or softball schedule and still teach his Sports Broadcasting course. Hedrick says that he does not have as much energy and cannot remember the names of players as quickly as he used to.

“I cannot do C+ work when I need to do A work,” Hedrick admits.

Hedrick has announced thousands of games across the nation yet got his start at Baker University in the 1950s. Hedrick says there is no secret to his success and that “Baker had a lot to do with my success.”

He learned to “toot your own horn” in order to make employers want to hire him. He secured his first job with Arden Booth announcing University of Kansas track and field, Lawrence High School football and a 15-minute Baldwin sports show. He remembers not being able to feel his feet out of sheer excitement while walking out with the job. He later learned that Booth had sang in the Baker choir with Hedrick’s father and therefore attributed his first gig to connections Baker.

Hedrick claims that Baker helped him gain the confidence necessary in order to land his first job. He would broadcast games as he walked across campus on his tape recorder and was able to run the public address system for Baldwin High School and Baker games to give him experience.

Another man with Baker ties, former Dean Benjamin Gessner, helped Hedrick land a job after graduation that was a teaching fellowship at the University of Kansas that allowed him to announce while earning his master’s degree.

“From then on, everything fell into place,” Hedrick said as he recalled the start of his career.

Hedrick then headed to Kilgore, Texas in order to make something of himself. He wanted to do it on his own this time (without connections) to test himself to see if he was really good. He loved his time there, but soon found himself back at KU at age 24. His mentor, Monte Moore, set up his audition for the role at KU and gave Hedrick the advice, “I helped you, you help the next guy.” Hedrick said that was the best advice he has ever received and that he has helped over 82 sportscasters get started, which includes Kevin Harlan, Brian Hanni and Gary Bender, to name a few.

As Hedrick prepares for retirement, he reflects on the impact that Baker has had on him and his career. He has continued to come back to Baker for over 30 years to announce sports games and teach Sports Broadcasting class. Sophomore Andrew Dowdy is a student in Hedrick’s Sports Broadcasting class. Dowdy is impressed at Hedrick’s amount of connections and his ability to have a story for every topic.

What makes it so hard to leave Baker, he said, are the coaches and their helpfulness, and seeing the students and that he’ll miss going to practices.

Director of Athletics Nate Houser admires Hedrick’s ability to connect with everyone he meets.

“Tom’s incredibly high professional standard is something I strive to reach each day,” Houser said. “He reminds me that every moment matters.”

He is grateful for his experience at other schools, but it is different at Baker. According to Hedrick, if you’re honest and you have a work ethic at Baker, then you’re going to be treated well here.

“I’ve never come to Baldwin City that I didn’t feel better when I left,” Hedrick said.

He does not know what it was about this small, town, but he knows that the people are kind, honest and that they care about you. He recalled that this was true in 1952 and is still true today. Hedrick never dreamed he’d be doing what he loves for this long and is appreciative of all Baker has done for him. When asked about life after sports casting, he is unsure as to what that entails.

“I’ve done this all my life,” Hedrick said. “This [sports casting] has been my life.”