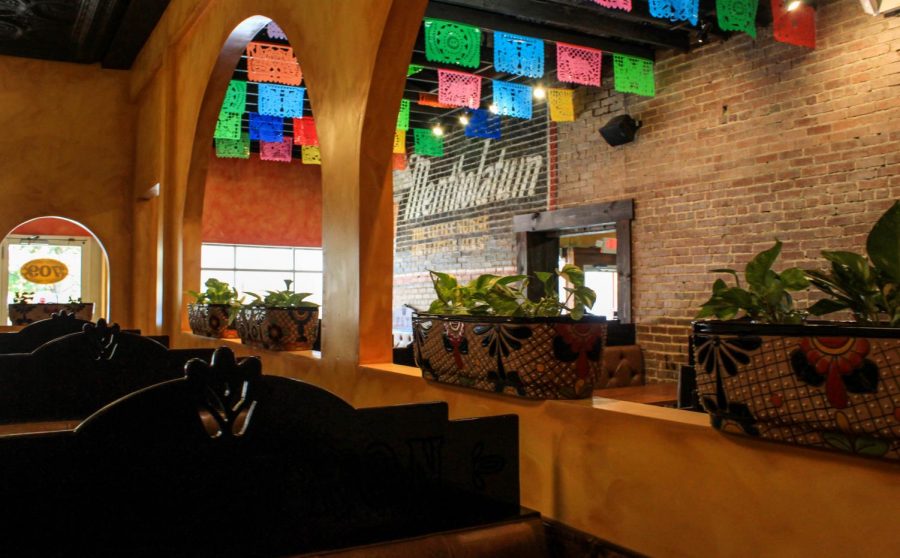 The newly added section of El Patron embraces its inviting setting. The expansion allows for more people to enjoy the exceptional food and service provided.

El Patron, Baldwin City’s Mexican restaurant located on Eighth Street, has expanded from their iconic bright orange building to the neighboring abandoned antique store directly to the north. The expansion will allow the city’s restaurant staple to serve more customers and decrease the wait time.

The new addition is conjoined to the original restaurant and increases the amount of customers able to be seated. The new addition features colorful flags lining the ceiling, a vivid orange wall and decorative plates hung across the back wall.

The exposed brick on the south wall shows off an original mural from the previous antique store that brings a nostalgic feeling and embraces historic Baldwin City.

“It’s a lot more spacious, and I don’t have to wait forever to be seated,” senior Jason Chambers said.

Patricia Delapaz is a waitress at El Patron and describes the new side as beautiful. Delapaz has worked at El Patron for three months and has adapted to the change of serving more customers. Owner and Manager Noel Ortiz estimates that the new edition is around 1,800 square feet and that the total capacity of both sides combined is 150-160 people.

Casey Simoneau, mayor of Baldwin City, bought the abandoned antique store and reached out to Ortiz to inquire if El Patron was interested in the building. El Patron is leasing the once-abandoned building from Simoneau.

Ortiz has been the owner and manager of El Patron for five years and was part of the catalyst group that decided it was time for an expansion. The new addition was only under construction for a month and a half before it was revealed it the public. Ortiz’s goal was to have the new addition open before the large crowds that come with the Maple Leaf Festival invaded the restaurant. Ortiz met that goal by opening the new addition on the Saturday morning of the Festival, Oct. 20.

Future plans for the Mexican restaurant include updating both store fronts. They plan to keep the interior of the original side the same but may update the booths and tables to match the other side. Other plans include the possibility of a back patio coming in the spring and the addition of a bar in the back of the restaurant.

With all the changes and increased seating capacity, El Patron is welcoming more servers to join their staff.

Ortiz encourages people to come in to fill out an application if they wish to help serve the Baldwin City community.