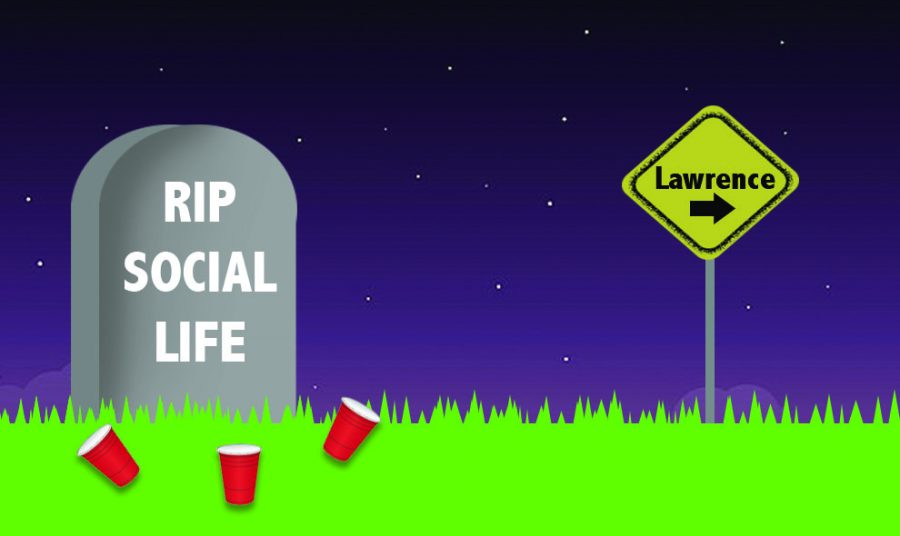 I’m just going to say it because it’s been on just about everyone’s mind since this semester began last Aug.

You may or may not have noticed, but the social life at Baker has pretty much gone as extinct as the dinosaurs. Fraternity parties are a thing of the past and used to be a social option for incoming freshmen. The weekends, as a rule, have become much quieter.

Baldwin City is a fairly quiet town in and of itself, so students’ only options to “go out” are limited to The Salt Mine, if they are 21 years of age or older, or to go find something to do in Lawrence. Additionally, Lawrence is less safe because minors are attempting to get into bars rather than staying in town and more safely “living” it up.

It’s no secret that college parties can consist of drinking, and the perks of parties in town prevented students from driving to Lawrence. The likelihood of drinking and driving has become greater concern because social events with alcohol pretty much are limited to places in Lawrence.

Not having parties often, or ever, doesn’t make or break a school, but it does influence the social lives of students.

Unfortunately, the lack of a social life on campus restricts what students are able to do when they aren’t playing sports, studying for their classes or participating in extra-circular activities or clubs.

Freshmen this year, and the inevitable flow of incoming students, will have to adapt and experience a social life here that many older classes never had to experience.

It’s likely that there will be more instances of alcohol in on-campus housing, too, and thus more infractions will occur as students who are found with alcohol in their dorm rooms.

The rules are being enforced more than they have ever been since I started attending Baker in the fall of 2016. Fraternities have been either on probation this year, or have been dry or going dry. For example, nationally, Sigma Phi Epsilon has been in the process of eliminating alcohol completely.

Social gatherings in Baldwin used to be a great place to see people that you might not see in your classes and on campus. Will this prevent the freshmen and incoming students from expanding their social circle on campus? Baker is a small campus, so being able to have students in one spot in Baldwin City was an experience. Every way I turned my head, I would see someone I knew or at least familiar face.

The Student Activities Council offers events and activities during the week on campus but not during the weekends, so the campus sees little to no activities for students, making it difficult for students to find things to do. If a student does not have a ride to Lawrence, then they might just have to tough it out at the ol’ Sonic on Highway 56, that is, until 11 p.m.

For generations, students have had the opportunity to have some good-old college fun, but it seems now that the campus will no longer allow for students to have safer options here in Baldwin City.

The situation introduces a question: will a lack of social life affect retention? Many new students look forward to enjoying this aspect of college, but it looks like they will not be able to have them. Social life may be extinct here at Baker.