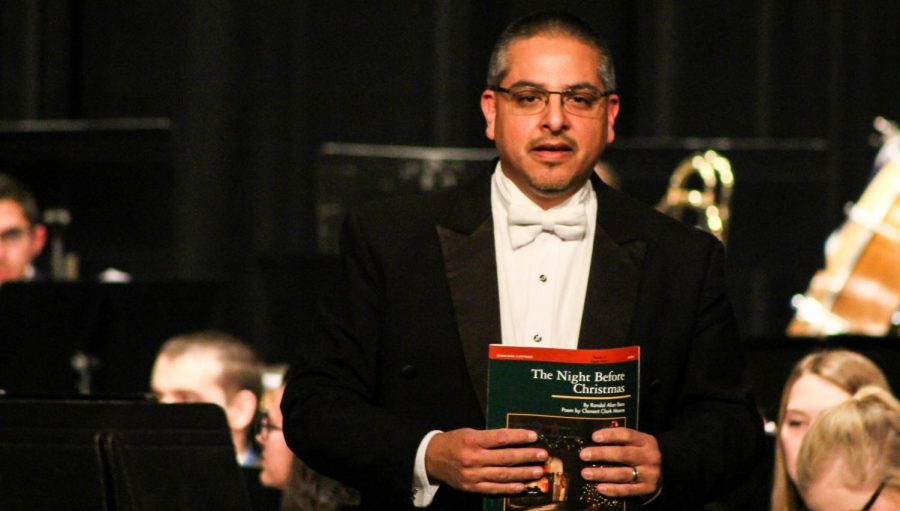 Frank Perez, director of bands, conducted the concert. Perez lent the baton to his conducting student junior Marget Hempleman for “The Spirit of Christmas.”

The Baker University Music Department introduced a new element to the winter concert performed on Nov. 30 at 7 p.m. Band Director Frank Perez explained that “The Night Before Christmas” was read while that band played accompanying music.

“Because [Baker University] is all about education and broadening experiences, I felt it was more appropriate to do something different,” said Perez.

Perez said when he was choosing the pieces for the concert, he was looking for a piece that would help vary the program.

“We have never done anything with narration before,” said Perez. “‘The Night Before Christmas’ has a very challenging, movie-type score. The music is more gestural and story-like, and I thought it would be a neat challenge for our band.”

Rather than hire a professional narrator, Perez said he decided to give a student the opportunity to narrate the piece.

“I thought this would be a really neat opportunity to give students the opportunity to do something like this and keep it student-based,” said Perez.

Percussionist and Mass Media major Tommy Waisner said he approached Perez about being the narrator.

“I decided that, since I want to go into voice work professionally, this would be a great opportunity for exposure and a good portfolio builder,” said Waisner.

Waisner said he prepared for the concert both in and out of class.

“Generally, Baker has a pretty standard winter concert, usually featuring the classic Christmas songs everyone knows,” said Waisner. “This is a Christmas piece, but it doesn’t necessarily have the musical features of Christmas music, but features a poem that is just as well-known as the music.”

In addition to the new Christmas piece, junior Margaret Hempleman conducted a Christmas piece at the concert. Hempleman is a music education major and is a student in Perez’s conducting class.

“My conducting has improved a lot over the course of the semester,” Hempleman said. “At the beginning of the semester my conducting was very robotic, but over time It has become more musical. That is something Dr. Perez and I have collaborated a lot on.”

“This experience has been so helpful as I look towards my student teaching semester,” said Hempleman. “‘The Spirit of Christmas’ featured multiple popular Christmas songs that everyone will recognize, it allows so many members of the ensemble to feature their talents, and it is just so much fun to get to work on with the ensemble.”