ParMentors give back to community 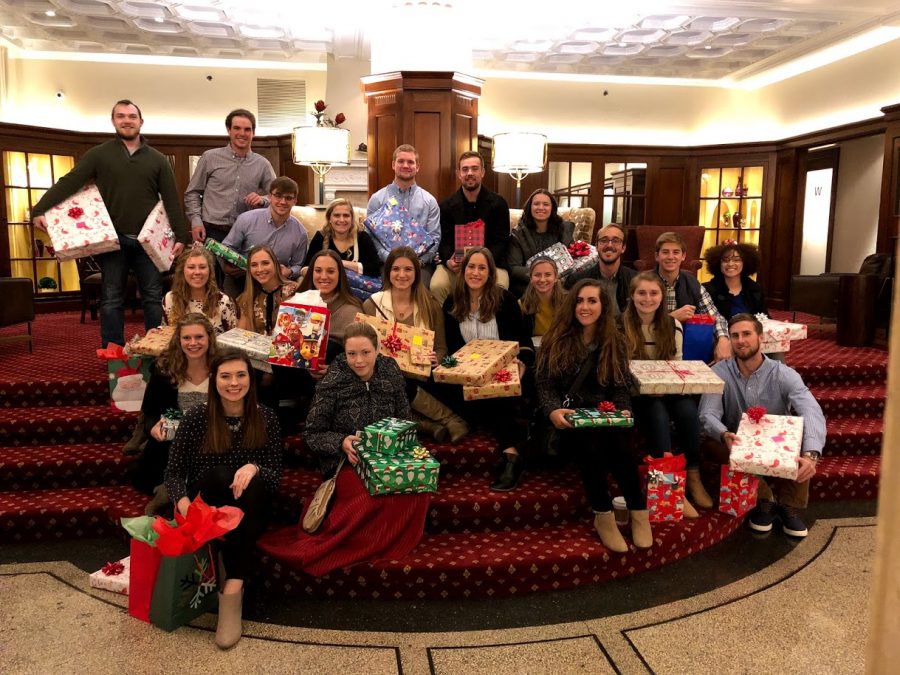 The parMentors pose with gifts purchased for the “Adopt-a-Family” project. The items were wrapped at the Eldridge Hotel following the group dinner.

One of the largest events that the parMentor student organization fundraises for annually is the “Adopt-a-Family” campaign.

“In the past we’ve fundraised around $400 to adopt five kids in a family, but this year we were able to adopt 18 children because we raised $970,” Nolte said.

The students are the main participants and fundraisers of the project. Sophomore Caitlyn Baker explained that she raised money in multiple ways.

“I helped by volunteering at the kids zone during the homecoming game, which is our biggest fundraiser for our ‘Adopt-a-Family’ project. The Baker Alumni Association donated money to us for helping out with the kids zone,” Baker said. “I also helped table in the Union and gather change and donations through Venmo.”

Junior Chandler Rogers matched the amount fundraised by parMentors through income from his moving company Help-U-Move, LLC, which he started in the summer of 2016. This fund matching allowed for the large increase in the number of families that the parMentors were able to adopt.

“I chose to do this because I have adopted a family in the past from Topeka, where I am from,” Rogers said. “Since I have gone to Baker, I have fallen in love with the University and the Baldwin City community, and this was an awesome way to give back.”

Rogers said this project is important because it proves something to those going through rough times in the community.

“This project reassures families in the Baldwin City community that they are in an amazing town and that there are others that care and are thinking about them, apart from their families,” Rogers said.

Nolte said the group goes shopping together on a set date followed by a dinner provided by a former trustee, Susanne Teel. Nolte then delivers the gifts to the Baldwin City Recreation Commission, where the parents of the families can come pick them up before Christmas Day.

Junior Annie Raybourn said she was touched by the campaign and appreciates everyone who donated towards the efforts. Her favorite part was shopping for the “Adopt-a-Family” gifts.

“I helped pick out items, so it’s very rewarding to me to know that I was able to help make a little boy’s Christmas more special. We couldn’t have done it without the help of everyone who donated to this great cause,” Raybourn said.