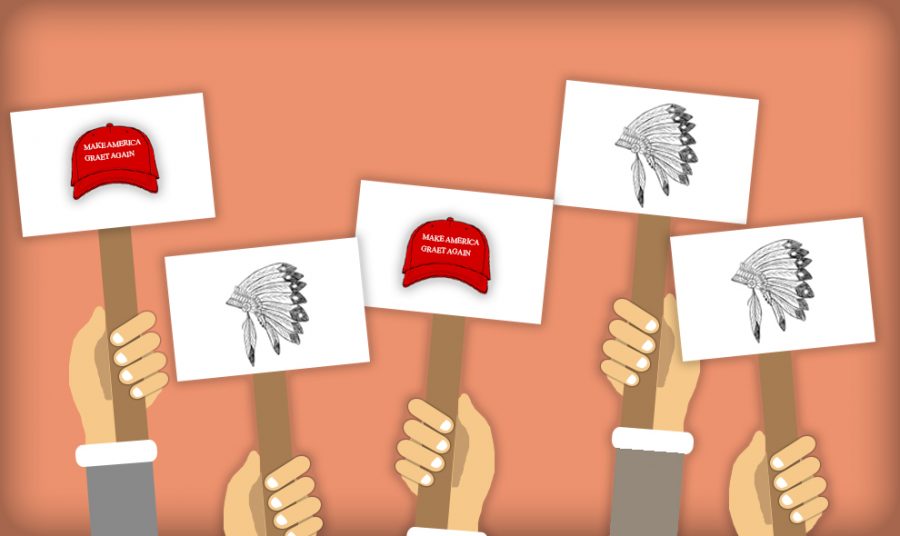 Free speech and the ability to protest are rights students have on and off campus. When confrontation arises, the manner in which students handle themselves can paint the institution they attend in a certain light.

Recently, a confrontation went viral between a group of Catholic school boys and Native American protestors, along with some Hebrew-Israelite activists. It left the nation in an online uproar.

There was also a protest held by Native American and Hebrew Israelite activists on the same day at the same location.

Videos and photos portray the students as hateful towards the culture of the other two groups. Imagery shows the students mocking them and allegedly chanting “build the wall” and other MAGA rhetoric over the groups’ cultural chants.

One student, junior Nicholas Sandmann, was involved in a confrontation with a Native American elder, Nathan Phillips.

Covington Catholic High School faced security concerns after the incident, so administrators issued a letter to parents that stated school would be canceled on Jan. 22.

It is not as easy as it seems for students to be suspended or expelled. Getting all of the information possible through investigation is important and takes time.

Sandmann and his supporters claim Phillips and the protestors behind him started the incident, and that they were merely defending their beliefs. On the contrary, Phillips claims the students incited hostility and disrespect and that he did what was best to keep the situation at bay.

Even with videos and interviews, it is difficult to tell exactly what happened if one was not physically present. As students, but also members of a society which encourages free thinking, we should take all sides of a situation into consideration and make educated accusations.

It is not difficult to see a group of young, white, MAGA supporters and be able to understand their intentions in this situation. Their intent was to be disrespectful when coming face to face with people who were protesting ages of Native American suffering.

People nationwide want the school to take responsibility for its students and take serious disciplinary action since the school was the trait to which they were linked. However, what affiliation do school administrations actually have to students off campus?

Sometimes it is difficult for school administrations to decide how to handle students who want to express their beliefs because of free speech. Being a private, liberal arts institution, Baker University has its own policies if a situation like this were to occur with Baker students.

Dean of Students Cassy Bailey provided insight on how she believes the University would handle similar situations.

The group of students from Covington Catholic High School traveled to this protest, while knowingly representing their school, and they did not uphold values of respect and honor. That seems like grounds for repercussions at an institute like Baker and should be so at every other school.

Bailey has expectations of how students should carry themselves when they come in contact with other people or actions they disagree with.

“As Dean of Students, I want our students to use their critical thinking skills, respect the diversity of people and opinions, display empathy and represent Baker University’s values and mission in everything they do,” Bailey said.