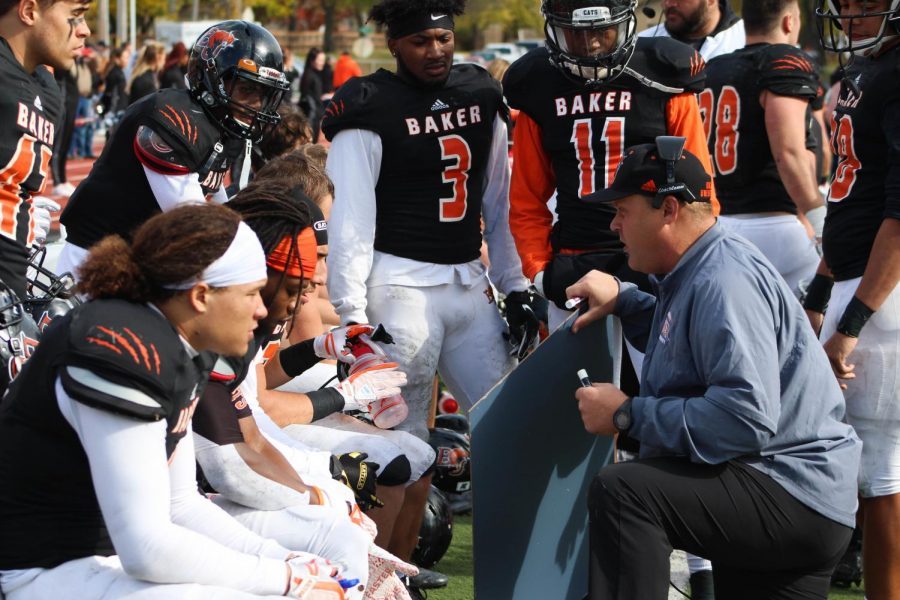 Assistant Coach Jason Thoren takes over as interim head football coach after 15 seasons with the Wildcats. Thoren is a contender in the national search for a permanent head coach.

Head Football Coach Mike Grossner will no longer serve as the leader of the Baker football program. President Lynne Murray and the athletic department announced the termination of Grossner on Jan. 22. Murray states the reasoning behind Grossner’s notice of termination is due to “violations of the University Code of Ethics and Code of Conduct policies of a financial nature and his employment agreement.” No further comments were made on the details of the termination.

“The things that haven’t changed are we still have our outstanding student athletes that are a part of the program and we have the whole staff,” Athletic Director Nate Houser said. “We are very confident in what they can do.”

Houser appointed Assistant Coach Jason Thoren to fill the role as interim head football coach until a permanent head coach is hired. Thoren has been a part of the Wildcat football program since 2004 and has been named the Heart of America Assistant Coach of the Year the past three seasons. Houser says Thoren was chosen for this role for his length of service, knowledge of the program and that he has been a part of the campus faculty. Thoren says that he has continued to stay at Baker over the years because of the people and the students.

Thoren recognizes the termination of Grossner has put the Baker community and the football program in a tough situation but it is his job to help keep things moving forward. Thoren says it is hard to say goodbye to coaching with Grossner since the two have been coaching together for 15 years and that they have been through so much including Grossner’s head and neck cancer diagnosis in 2014. During this time, Grossner was able to rely on Assistant Coach Thoren to help lead the team.

Junior defensive end Jake Zieler was recruited by Grossner. Zieler says that Grossner’s termination came to a surprise to the whole team. Once the players were made aware of the situation, they split up into offensive and defensive groups. Thoren consoled the players and reassured them that they had to be stronger than previous years for the upcoming season.

“Everybody you could tell was kind of in shock and definitely a lot of players were distraught about the whole thing,” Zieler said.

Grossner helped the ‘Cats reach many accolades during his time as head coach and broke many school records along the way. Grossner was with the Wildcats for 15 seasons, seven of those years with NAIA playoff appearances. Grossner led the ‘Cats to the NAIA-FCS National Championship game in 2016, just the second in program history.

“Coach Grossner is a great man and an outstanding coach and I have no respect lost for him at all,” Zieler said.

Devoted Wildcat football fan Ruth Sarna, most commonly known in the Baker community as “Nurse Ruth,” said she will continue to support the Wildcats at every game as she has only missed one game in the past four years.

“I am hoping they hire Coach Thoren as head coach, and will support him and the team as fully as I ever have over the years,” Sarna said.

Houser says that the Baker community is seeing the positive side of a difficult situation by being supportive of Coach Thoren’s interim role. Houser sees the football team not missing a stride and once leadership is solidified, the team will still be in the position to compete for conference and national championships.

“The important thing is that we still know how to win football games and we have the guys to do it,” Zieler said.

Thoren is competing for the permanent head coach position. Zieler says that the feeling of the team and himself is that Thoren is the man they believe should be the new head coach. Houser is unsure of when the head coach position will be filled but says they are quickly moving along in the process.