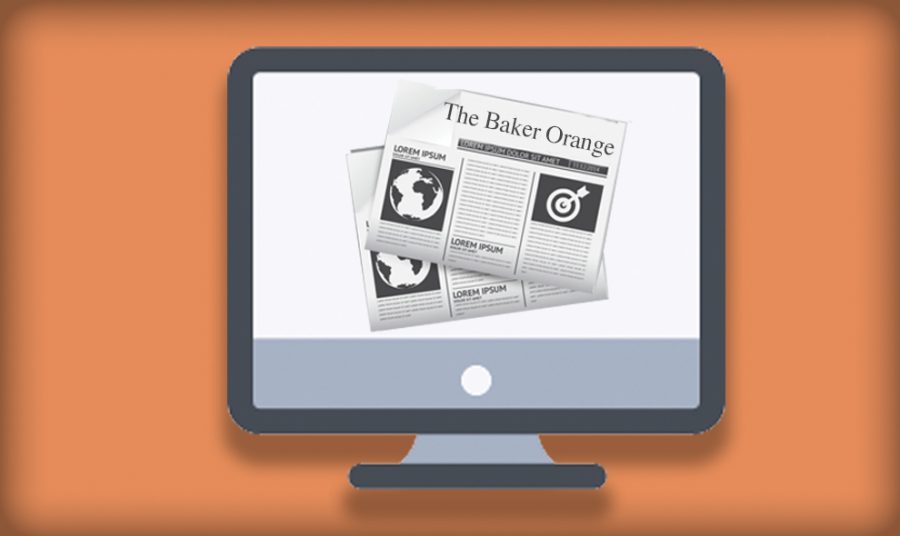 The Baker Orange will no longer be printed monthly and will solely be an online news source starting the upcoming fall 2019 semester. Discussion regarding Baker’s student-run newspaper ending its print publication and going digital has been a topic of conversation within the mass media department since 2012. May 3, 2019, will be the final print issue.

“It’s unfortunate and none of us are happy about it [ending the print publication] but it reflects larger changes in the media industry and the shifts in skill set that our students need,” Professor of Mass Media and Chair of the Department of Mass Media and Visual Arts Joe Watson said.

Watson, along with the guidance of Dean of the College of Arts and Sciences Darcy Russell, made the decision for The Orange to go digital starting this fall. Watson said the reasoning behind the transition to online is that the department reached a point of shifts in personnel, changes of audience taste and to direct their limited resources to more productive areas. Although The Orange is already housed online at thebakerorange.com, this domain will serve as the only platform with future Orange publications.

The Orange has been in search for an adviser since Dave Bostwick left for the University of Arkansas in 2016. The Orange adviser position has since been filled by Baker alumna Taylor Shuck for the duration of the 2017-2018 school year and Visiting Assistant Professor of Mass Media Anne Christiansen-Bullers since the fall of 2018 to present. Dr. Jessica Elam will be joining the media department in fall 2019 as the new adviser for The Orange. Elam looks forward to the fully digital publication since her doctorate degree is in digital media.

“An online-only publication presents the opportunity for increased collaboration with students pursuing radio and TV tracks, bringing various skill-sets together to learn from one another and produce multimedia content that offers interactive experiences for the Orange’s readers,” Elam said.

The television workshop will be folded into the online news program with hopes of emerging next semester as a complete digital online news center. Radio will still be housed on bakerradio.org.

Watson said students are no longer coming to Baker to be print newspaper reporters. Students need a more intensive digital media background to better prepare them for the workforce. Combined media workshops will give students the opportunity to develop a variety of skills instead of only focusing on one area.

“Technology has changed things and you’ve got to change with the times,” Watson said.

According to the Baker University archives, the first issue of The Baker Orange was published in January of 1896. At that time, there were two newspapers at Baker and they conjoined to form The Baker Orange. The Orange was printed weekly at one point and, rather than completely ceasing the print publication, the transition to a monthly print issue began. In 2005, The Orange would come out every Friday and Watson had to tell students to put down the paper during class because they were so enthralled in The Orange. Watson says he cannot remember the last time that happened.

The Orange’s main audience, Baker students, have expressed limited interest in the print publication as there are numerous stacks of print issues that go untouched each month. By transferring content to only online, it is aimed to better accommodate students’ media wants.

Watson realizes that alumni and people on campus may be upset about the cease of the print publication and wants them to know that the end of the print edition is not being celebrated as it will be missed within the department and across campus.

By The Orange going digital and ending the print production, it gives students the opportunity to expand on vital digital skills needed in the workplace. The final Orange print publication dates are set for March 8, April 5 and May 3.