The first and second life of Osborne Chapel 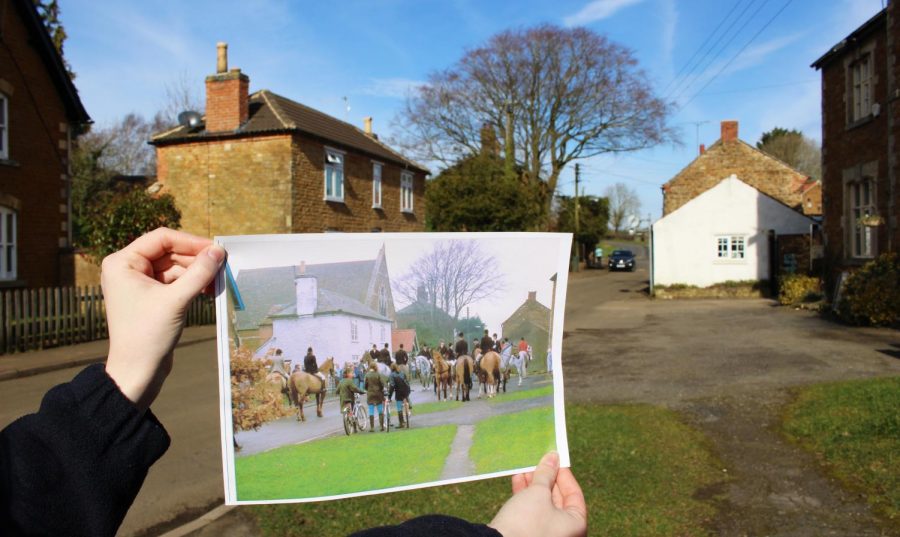 An old picture looms in front of the street Osborne Chapel sat on years ago today in Sproxton, England. This highlights the change the village has seen since the complete removal of Clarice L. Osborne Memorial Chapel to Baldwin City, KS in 1995.

I rolled out of bed on a foggy spring morning at Harlaxton College located right outside Grantham, England. I decided the night prior to go visit the small village of Sproxton where Clarice L. Osborne Memorial Chapel used to sit before it was moved brick by brick officially to Baldwin City, KS on Oct. 23, 1996.

After doing some research by hopping onto the “Baker University – Clarice L. Osborne Memorial Chapel” Facebook page, I was able to find that the village of Sproxton housed the memorial and original location the Chapel.

Since Osborne Chapel was reestablished it has become a focal point on campus, and Baker wouldn’t be the same without.

I am one of two Baker students studying at Harlaxton College this semester. I saw it as a duty to myself, and to Baker’s campus, to go find out more about where Osborne Chapel came from and why we have it now.

It seems that most people know the Chapel is from somewhere in England. One of the first things freshmen hear during orientation and on campus tours is about how proud we are of this little house of worship.

The Chapel was originally named the Sproxton Methodist Chapel and sat across the street from the only pub, called in the village called ‘The Crown Inn’. The village is small and rests quietly in the English countryside.

Directly across where Coston st. and Main st. meet sits a small bricked memorial garden. This site is where the chapel stood and currently displays two engraved stones with words etched into each honoring both Sproxton Methodist Chapel and Osborne Chapel.

The left stone reads: “For thou must share if thou wouldst keep that good thing from above for ceasing to share we cease to have such is the law of love”.

That phrase highlights the love and unification that the Chapel represents having existed in both places at one time or another. The stone on the right honors the current location where the Chapel presides now in Baldwin City, KS at Baker University.

The Chapel was built in 1864, making it only a few years younger than Baker University itself which was established in 1858. The use of the Chapel is similar in how the people of Sproxton once used it in the 20th century.

The awning located in the gardens behind the Chapel was originally located at the entrance of the building and welcomed its congregation for services as they entered the Chapel on Coston road.

I was directed by a Sproxton local to speak with eighty-seven year old Raymond Bennett who had attended the Chapel with his family as a child. Bennet lives next to the pub across the street from the memorial garden, and used to own the pub a few decades ago.

While waiting for Bennett to come home to interview him I saw him drive up in his little red car with the biggest smile possible. After collecting his grocery bags he invited me in for a cup of tea to talk about the history of the Chapel.

In his home, Bennett showed me a painting of the Chapel where it had originally stood and talked about his life mentioning little things that he remembered about the Chapel. He recalled that the gate that separated the Chapel’s front garden and the street had spikes sticking out and one day he had run his bike into the spike and injured himself.
These little differences between the Chapel then and now highlight the lives and experiences that the chapel has touched both in Kansas and in England.
Bennett offered to drop everything he was doing for the day and explain all the history that exists in Sproxton. The little red car and Bennett showed me how people live in this country compared to my own. That Chapel opened my eyes to the cultural difference and similarities that exist between Sproxton and Baldwin City.

University Minister Reverend Kevin Hopkins visited the site of the Chapel in March 2018 and found it incredibly powerful to stand at the site where the Chapel once stood for over 100 years.

“People have been married, buried, baptized and worship here since 1864,” Hopkins said.

Junior Noah Hasting is an active Chapel-goer and loves the atmosphere that exists Thursday mornings at 11 a.m.

“It’s a community and my favorite part is seeing people talking to one another before Chapel begins whether it be about God, religion, academics or just something random and fun,” Hastings said. “People are laughing and smiling and it just brings joy to the week.”

From 1985 to 1986 the Chapel sat in disuse only to be discovered in 1989 by Dr. Dean Bevan professor of english and visiting professor at Harlaxton College found the Chapel in Sproxton. The Chapel had been closed for seven years due to a low number in congregation numbers.

“It is so powerful to know that the Chapel has been used as a worship space on two continents,” Hopkins said.

One thing that can be agreed on by all those affected by the Chapel is this that the Chapel represents worship through the ages and a connection with England, a country with a rich and deep history.

As the day came to a close Bennett reflected on how intertwined his culture and American culture were together. It is so important to appreciate and learn about where things come from, as history is passed from one generation to another. Osborne Chapel represents the diversity of the world and how both cultures ultimately come together in the end.

Bennett offered to drive me back to Harlaxton Manor as the sun began to set. The take-away from that unexpected Friday adventure was incredibly profound but so simple.

“History is one of the most important things we have,” said Bennett.