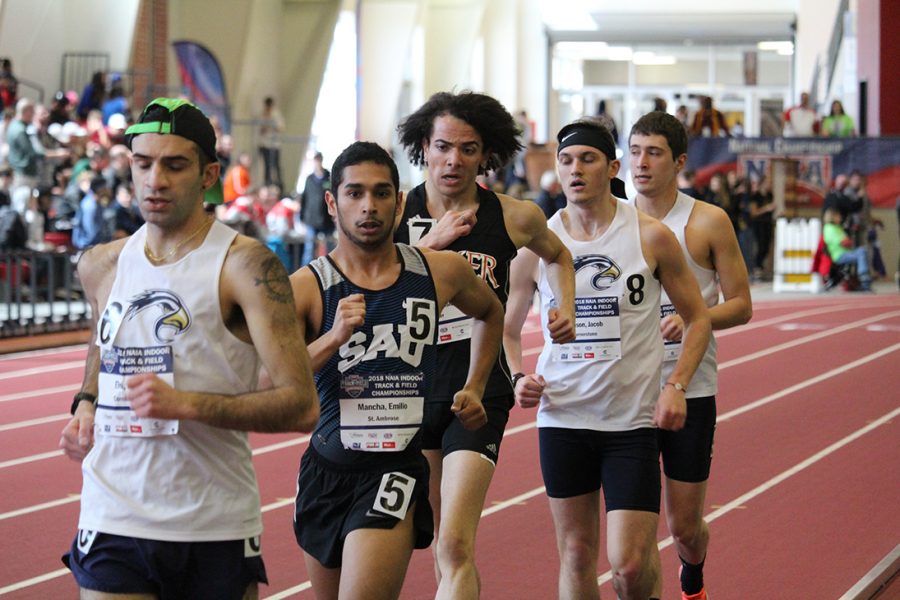 Junior Moses Watson became Baker’s third ever track national champion in the 3,000-meter race walk while also capturing the school record at 12:39. Junior Myan Elrington also earned a school record in the triple jump as she jumped 11.22 meters and finished 21st in the event. The women’s 4×400 meter squad made up of Elrington, freshman Myah Yoder and seniors Tiarah McDaniel and Kaycee Mayfield, finished the meet with yet another school record of 3:54 and an All-American 5th place finish.

Other national qualifiers include sophomore Liam Barnsby (14th in the 1,000-meter run), sophomore Morgan Thomas (16th in the high jump), junior Kwan Brooks (18th in the long jump), junior Deverius Brown (14th in the triple jump) and junior Logan Lamb (10th in the heptathlon).
Watson, 3-kilometer race walk national champion
Watson entered the race walk event ranked first. He knew he could win based off where he was ranked and the amount of training he put in. Watson used strategy in his favor as he remained in the top three throughout the duration of the race until about 600 meters remaining when he took over the lead. Watson finished the 3-kilometer race in 12:39 and the second-place finisher was five seconds behind.

After finishing 6th at last year’s indoor national meet and being disqualified in the last 100 meters at the 2018 outdoor nationals, Watson set out with the goal of becoming a national champion. Watson increased his mileage and overall training pace in order to improve for this season and ultimately become a national champion in the race walk.

“I’m hoping I inspire other people to do the same thing,” Watson said. “If you put your mind to it and really just go after it, it can happen.”

Watson’s time qualifies him for USATF’s Toyota Indoor Championships for next season where he will be competing for a spot on the Olympic team. Watson will be competing in the upcoming outdoor track season where he hopes to repeat as champion.
Elrington, school record in triple jump
Elrington knew she was close to the school record and came into the national meet ready to break that record. She hit the mark of 11.22 meters on her second jump which officially made her the school recorder holder.

“I was so happy,” Elrington said. “I was dancing and everyone was laughing at me.”

Elrington’s previous personal best jump was 11.12 meters. Paige Rockers previously held the record of 11.21 meters from 2015. Elrington finished 21st and accomplished her other goal of improving from where she came into the meet ranked, 35th.
Women’s 4×400-meter race, 5th place & school record
The women’s 4×400-meter team arrived in Brookings with the confidence that they could become All-Americans. They wrote on the iced-over van windows, “We’re gonna be All-Americans,” and they did just that.

The team was ranked 14th going into the race and they all had the common goal of making it to finals. Elrington said there was a lot of congestion and elbowing throughout the race.