Campus safety videos in the works 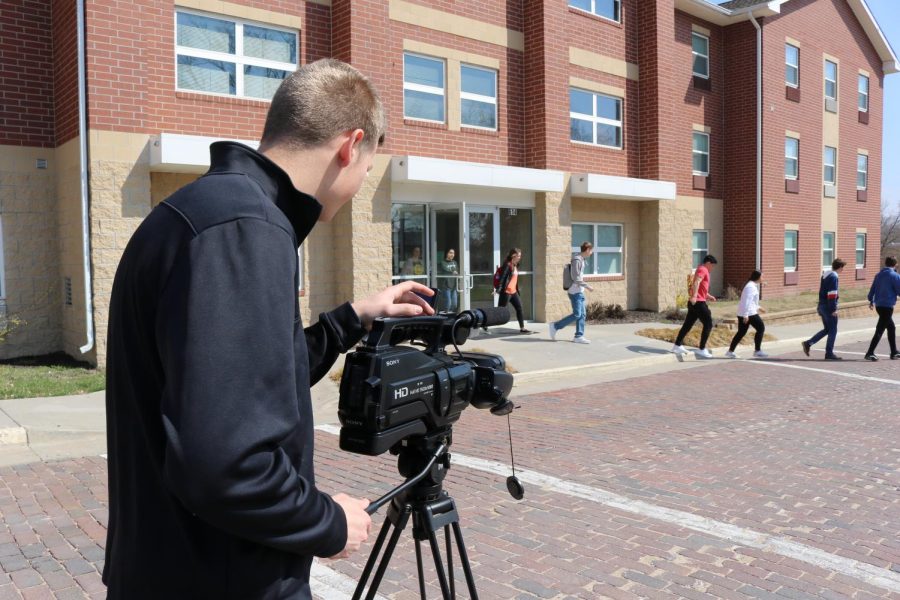 Freshman Adam Cook aims the camera at video participants. An average of 15 students were involved with each campus safety short film production.

Student Senate kick-started the production in late January of this year. A team of students will be making three videos to demonstrate campus safety, including fire evacuation, tornado procedures and an active shooter plan. Senior Conner Petty, Vice President of Student Senate, is a part of the production team.

“We realized that we did not have an in-depth description of our active shooter plan,” Petty said. “That along with fires and tornados are kind of the three most prevalent safety issues on campus, thus the video idea was brought up.”

Associate Vice President of Capital Planning and Facilities & Emergency Manager Scott George is overseeing the project. He outlined the process for safety precautions, and junior Lily Stephens was tasked with writing the scripts in a more narrative format for the videos.

With increasing numbers of campus shootings in the United States, schools must be equipped with the tools to keep students and staff safe.

“It’s not that we don’t feel safe,” George said. “We’re in a great community that has relatively low violent crime, but we have to prepare for the worst. That’s just the world that we live in.”

The usage of the “run, hide, fight” method for an active shooter was adopted for Baker’s prospective video. The well-known method was copyrighted from the City of Houston, and Baker plans to give it credit for that terminology.

The model lays out three levels of getting out of an active shooter situation: “run” away if an exit is accessible, “hide” and protect oneself if running is not an option and finally be prepared to “fight” if the circumstances require it. Baker’s “B-Alert” system that technologically notifies students of emergencies will be highlighted as well.

Baker used multiple sources to form the fire safety and tornado safety scripts as well, including the Federal Emergency Management Agency (FEMA), the Baker University Handbook, the National Weather Service and the Baldwin City police. The production team looked at national standards and responses in order to bring the practices to a local level.

Students volunteered to sign up to be actors in the videos. Petty made a Sign-Up Genius online. He first sent it out for coaches to encourage their players to sign up. Then he sent it to various organizations, like the theater program, sororities and fraternities. Finally, George sent out an official email to all students encouraging everyone to get involved.

The filming of these videos was set for March 7 for the active shooter video in the Harter Union, March 21 for the tornado video in Mulvane Hall 100 and March 28 for the fire video in the New Living Center dormitory. Each took place from 11 a.m. – 12:15 p.m. and had 11 to 20 student actors involved.

President Lynn Murray will be giving a 30 second to 1-minute introduction at the beginning of each video explaining why Baker takes campus safety so seriously. After her speech, students will be demonstrating safety actions while three main students do the scripted voiceovers.

The production team plans on creating videos that are 3-5 minutes long. They want to capture students’ attention and be able to get the message across efficiently.

“We don’t want them to be something long that people are going to want to turn off. We want to get as much information as quickly as possible and then move on,” George said.

Freshman Adam Cook is the videographer for the project. He will be filming and then editing the videos into a final product. He believes video is the best way to spread an important message because of its multiple dimensions.

“Video is the most effective form of media because you can not only see what’s happening, but you can also hear what’s happening,” Cook said. “Something as complicated as an active shooter evacuation and fire and tornados cannot be portrayed in a long paragraph because most people won’t sit down and actually read that. Instead, a 3-5 minute video can be easily watched and absorbed.”

These short videos will be available on the Baker website and through Baker social media. The production team hopes to have them up and available by the end of this school year or the beginning of the Fall 2019 semester.

“My thought was ‘let’s build something that’s for Baker with Baker students with the idea that if my friends are in this video, I’m probably going to be more likely to watch it, or if I’m in the video, I’ll be more likely to watch it and share it with other people,’” George said. “We want it to be able to spread it virally from a social media type of stance, but for an educational video.”

The idea is to inform students so that everyone is prepared to react to multiple circumstances. Therefore, the videos will not give an in-depth description of exactly where to go for a specific situation; rather, they will give students the guidelines they need to make smart decisions.

Though recent events in national and worldwide news have made people more aware of campus safety, George stresses that Baker wants to prevent devastating events from ever happening.

“We try to be more proactive rather than reactive,” George said. “It’s a matter of making Baker better, and these videos are just another step along the way.”