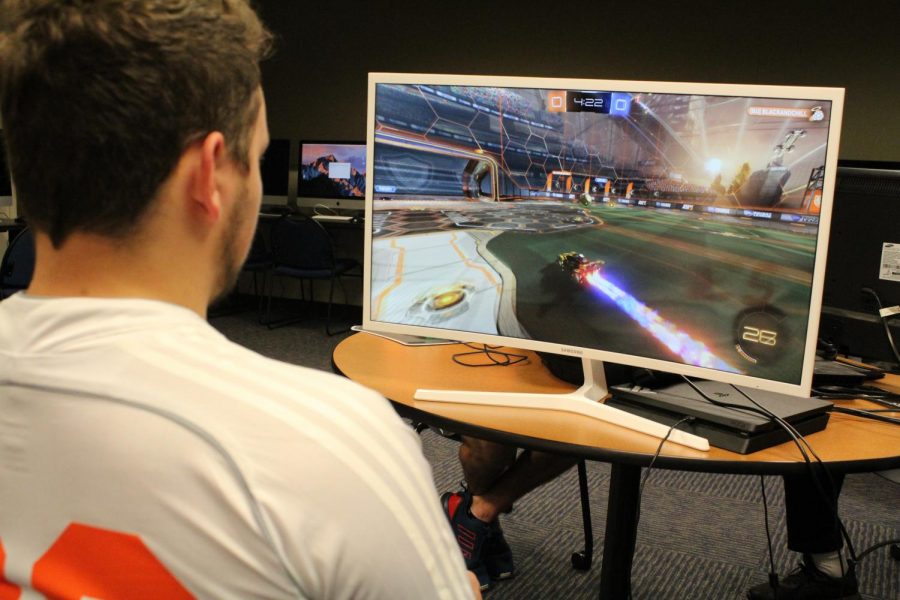 Baker will add an eSports team to the list of scholarship eligible sports this fall.

The athletic department announced the addition of an eSports team to enter Baker’s Fall 2019 sports roster. eSports is a relatively new, up-and-coming sport where athletes compete against each other in video games. It will be offered as a co-ed varsity scholarship-eligible sport just like any other athletic team.

Baker will be the sixth team within the Heart of America Athletic Conference to gain an eSports team and the eighth in the state of Kansas.

Toby Ebel will serve as the head coach after being a Baker employee for over 18 years. Ebel has previously been the assistant volleyball coach and has worked in the IT department. His experience in IT, love of coaching and being a video game player himself makes him an ideal coach according to Athletic Director Nate Houser.

“I just think it’s going to be a unique opportunity,” Ebel said. “Not only just for our student-athletes that we bring in, but for the whole campus.”

Houser has seen eSports on television for a couple of years and proposed that a team be added at Baker. By introducing the new sport, Houser hopes to appeal to a different kind of student-athlete that Baker has not been able to reach in the past. Houser hopes to attract STEM students that will boost the science department. He also thinks eSports will appeal to a lot of artists, graphic designers and business majors.

“I think it’s an opportunity for Baker to reinvest in some of the computer science, business, data analytics classes,” Houser said. “I think this sport really has a tie into life.”

The eSports team is hoping to compete in three different games for its first season. Those three games have yet to be determined, but Ebel says it will potentially be Rocket League, Overwatch and League of Legends. The games that are chosen will depend on the roster numbers and athlete’s specialty. The eSports team’s season of competition is determined based on the games they choose to compete in.

“It definitely looks like we can form a pretty good Rocket League team,” Ebel said.

Ebel says there are good Rocket League players already on campus that are looking to join. With the addition of a few incoming freshmen, Ebel believes they can field a strong Rocket League team. As for the other games, it depends on the roster size and the incoming talent.

The team will compete from Baker with minimal time missed from class. However, there are bigger tournaments and championships that require traveling for all athletes to compete together in a centralized location. The team is looking into practicing together four to five days a week in the NLC on the second or third floor classroom area. Baker is purchasing a few quality gaming systems so that athletes are able to practice together. eSports practices will begin after 6 p.m. in order to accommodate for dual-sport athletes’ practice schedules.

Ebel says about 10 current Baker students have expressed interest in joining the team. Sophomore Carson Fitzgerald is one that is excited about the addition of the eSports team. In season two of Rocket League, Fitzgerald was ranked in the top 75 in the world.

“I definitely think it can be just as hard [compared to traditional sports,] but it’s more of a mental thing rather than a physical ability,” Fitzgerald said.

He played on a gaming team in high school and is interested in eSports to make more scholarship money, meet people and have fun. Fitzgerald and two others interested in joining the team were able to stream their play for Ebel to review.

Fitzgerald is also a member of the tennis team. Houser is still working on finalizing how a dual sport athlete’s financial aid package would change in order to add eSports. Houser wants the students to reflect on their academics as well to see if they have the time to commit to two sports.

As for other recruits, Ebel has received around six or seven interest forms from high school students. Baker is now a member of the National Association of Collegiate eSports (NACE). This organization helps Baker find incoming recruits and schedule tournaments.

Ebel is looking for athletes with cross-gaming experience and the versatility to play numerous games. Ebel also looks at rankings on the different gaming sites and watches livestream footage on Twitch of people playing video games. Ebel compares it to other sports athletes such as basketball or football submitting a tape for a coach to review, except that Ebel can watch his potential athletes live online.

Houser is looking forward to learning about the sport and engaging the student body in eSports.

“I want the student experience here to be a lot more fun and a lot more involved,” Houser said.

By introducing eSports and more technology, Houser hopes to get students excited about supporting the newest addition to the Baker sports lineup. For those that are interested in joining the eSports team, visit the eSports recruiting tab on bakerwildcats.com.