The Baker Orange • May 7, 2019 • https://thebakerorange.com/30021/news/student-dialogos-presentation-a-discussion-on-athletes-and-risk/

Student Dialogos presentation: A discussion on athletes and risk 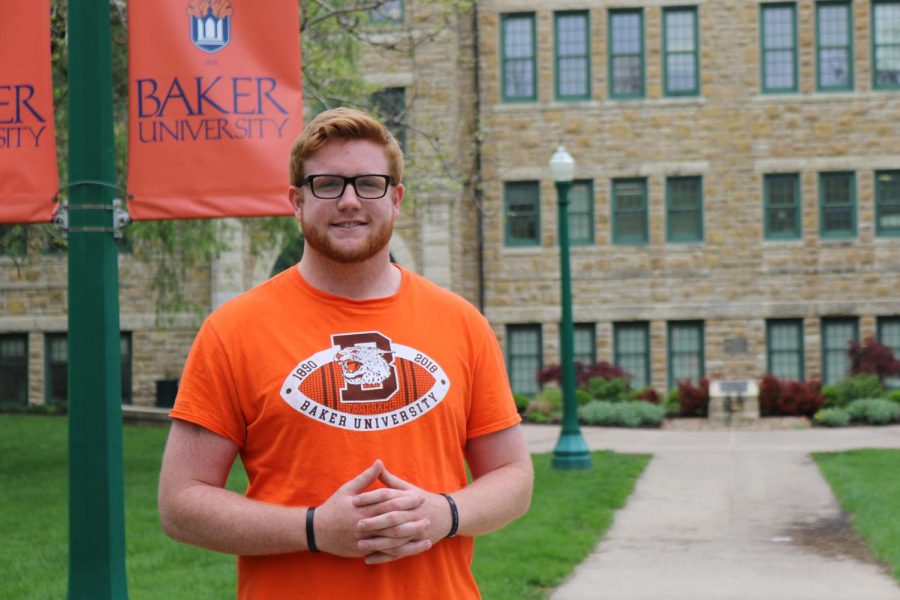 Senior Jarrett Alley works through his major of exercise science and passion for sports. At this year’s Scholar Symposium on April 10, Alley presented his research on emotional and physical stress that athletes face in their sports.

Athletes are put through a great deal of physical and emotional stress. Though participation in collegiate athletics is meant to be enjoyable, and is for many people, a student-athlete’s personal well-being can be put at risk. Among the many Baker Dialogos presentations was one that aimed to identify specific connections between mental health and sports.

Junior Jarrett Alley is a business and sports administration double major at Baker University, and he also plays football. For his Dialogos research project, he decided to study the relationship between the level of sports participation and the overall well-being amongst Baker University students.

The Player’s Tribune is a website that professional athletes contribute to. There is a whole section on the site called “Mental Health” that includes videos and articles written by athletes about their experiences with mental health issues and informing other athletes of the importance of acknowledging these issues in sports.

He received more inspiration from a marketing campaign that ESPN released in the last couple of years called Life Needs Sports. Since “life and sports” is pretty broad, Alley narrowed his research down to Baker students.

“I’ve been interested in sports a long time, and mental health has become something really topical in the United States and in society, but also in sports,” Alley said.

With 60 percent of Baker’s population being athletes, Alley knew his research topic would be relevant to this campus. In order to gain evidence on this claim, Alley created a survey that drew from three main literary reviews or research projects done by other people.

The survey began with questions from a mental health continuum that he found in a study done at Florida State University. These questions created a baseline for the general well-being of the respondent.

The next part of the survey was to gage the respondents’ level of sports participation based on a three-point scale: whether the respondent plays a sport consistently or every day, three to four times a week or not at all.

Then the respondent was asked to complete the same mental health continuum as before, except with ‘when thinking of your sport…’ penned before the question.

From there, the survey included a self-identity scale, which aimed to measure the respondents’ views of their athletic abilities and mindsets regarding sports. Finally, the respondents were asked to fill out information on demographics so that Alley could compare the campus as a whole to the results of certain groups.

“Being able to draw conclusions based upon relationships between demographics like major, graduating class, gender and different sports and the mental state of athletes was really important for my research,” Alley said.

Over 150 students filled out the survey. Ideally, Alley would have preferred to capture a third of the Baker population, 300 people. Nonetheless, he believes the outcome was reflective and will be beneficial regardless.

Whether or not a student-athlete is a starter, is not a significant predictor of well-being.

Playing time of a student-athlete is not a significant predictor of well-being.

Participation (just being on a team) is a significant predictor of well-being.

Those who participated in intramurals demonstrated a higher well-being than those who did not.

There was a relationship with class attendance and well-being: The more absences, the lower well-being.

Initially his research was a part of his senior seminar class for sports administration, so Alley had been working on it since late Aug. 2018. He did a semester long research proposal and completed multiple studies on similar research. Then he presented the proposal in Dec. 2018, which is when he began meeting with his professor to start developing his project.

After months of collecting data and developing in-depth results, Alley presented his research project at Baker Dialogos on April 10. Even after presenting, he is still thinking of ways he can further his research.

Alley attended the NCAA basketball tournament one weekend at the Sprint Center and had the chance to speak with a few University of North Carolina players about mental well-being, which is something division one schools are recently focusing on more. The stress level of being at a high level of competitiveness while also being in the media and national light can cause issues for division one athletes, which is something Alley would like to tackle.

“I’m super proud of the work I’ve done. I think it’s going to be really beneficial,” Alley said. “I wanted to help people with this project. Hopefully it can help the Baker administration identify issues and maintain the well-being of athletes and just everyone on campus. It’s just the icing on the cake that it has something to do with sports because I’m passionate about that anyway. I’m excited to build upon what I’ve already found.”