The Baker Orange • May 7, 2019 • https://thebakerorange.com/30082/sports/brees-seeks-national-championship/ 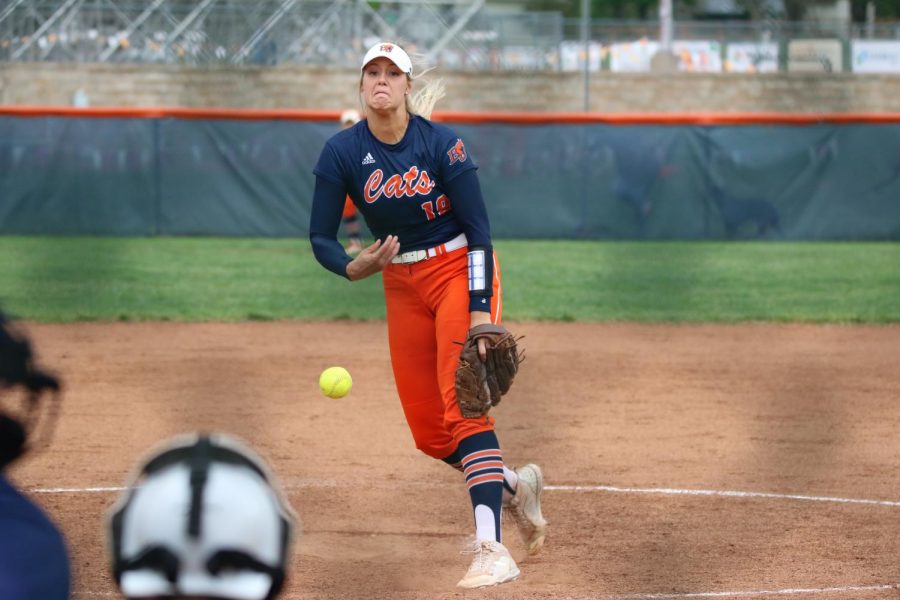 Senior Olivia Brees received NAIA National Pitcher of the Week honors for the second time this season. Brees led the team to win the Heart for the first time in 37 years. The ‘Cats are heading to the national tournament for the second year in a row.

If you follow the Baker Athletics headlines, you might have seen or heard the name Olivia Brees mentioned quite a few times over the last four years. Her successes on both the women’s volleyball and women’s softball team for Baker University has earned her over 20 awards and recognition throughout the course of her collegiate career.

Despite setting six new records for the softball team last year, some of her most notable recognitions from her 2018 athletic season include Google Cloud Academic All-American of the Year, Baker Female Athlete of the Year and NAIA First-Team All American.

Like most college students on the road to graduation, Brees agrees that her decision-making is one of her greatest weaknesses throughout the trials of her college career. Brees insists there has always been one decision that she was confident to make—playing sports.

“Ever since I can remember,” explained Brees with a laugh, “I swear, since I could walk, I was probably throwing a ball or playing basketball or something. It was all because just wanted to be like my sister.”

Brees’ 24-year-old sister, Taryn, played volleyball for Baker between 2011 and 2015 while getting her degree in Exercise Science. After getting a masters from Western Illinois University in Kinesiology, she moved to San Diego, California to continue her love of sports by becoming a physical trainer and local “gym rat.” Taryn’s impact on Olivia has been lifelong, and she (Olivia) credits much of her competitive spirit and success to her sister’s attitude and behavior.

“Growing up, I know how hard she worked to get everything that she has earned and she always has a positive attitude and knew that she was capable of doing anything she put her mind to. That was a huge inspiration for me,” Brees proudly said about her sister.

The continuous inspiration that Brees feels from her sister Taryn has carried over into much of her career as an athlete and student at Baker.

“I knew she came from a great family because I had the pleasure of coaching her sister Taryn in volleyball here at Baker,” said Stanclift.

Drawing from this inspiration, Brees has learned that in life and sports, a “growth mindset” is essential for remaining humble. She believes that her growth mindset and confidence tend to lack in other areas of her life, outside of sports. Brees explains that this is because, as an athlete, it is easy to see immediate results as well as have the accountability of your teammates and coaches.

“Everything has changed since I first came to Baker—my attitude and effort—and I think that the softball team showed a lot of [those changes]last year, too. We did have an awesome season, but it wasn’t enough,” Brees reveals this change of perspective. “I’m reading a book now that talks about a fixed mindset. With a fixed mindset, you don’t want to grow and achieve more because of fear of failure.”

Brees believes that she, along with her teammates, do not possess this more unfavorable “fixed mindset,” yet hopes that her drive as a competitor inspires others to never grow stagnant in their success.

“I actually never thought I would meet a person more competitive than myself and after coaching Brees for four years now, I think she may have beat me,” Stanclift said.

Brees claims that her competitive nature can occasionally be misconstrued by teammates who think that she is being over-intense or negative. This occasional pushback from teammates throughout her years has never prompted her to lose the passion of the game. However, Brees suggests that the most negative person in her life is herself.

Teammate Sydney Boaz mentions that she has looked up to Brees as a role model—much like the rest of the team—as she always steps out on the mound with confidence and a passionate attitude.

“She’s definitely not afraid to speak up and has become a huge leader for our team,” Boaz said. “She’s not afraid of what people will think and always has the team’s benefit and success in the back of her mind in everything that she does.”

She claims that her successes have never come easy. In fact, they came at a very high price during her high school years when deciding to take a significant break from all sports. Brees claims to have reached her peak negativity during this time in her life—describing it as nearly a depression—while working toward goals to get recruited as a collegiate softball player.

“One thing that I think some people don’t fully understand about Olivia is exactly how much she hates to lose or fail and how personally she takes it,” said Stanclift in regards to Brees’ mindset as a competitor.

Assistant Softball Coach Gary Hines has trained and developed Brees as a pitcher for all of her seasons at Baker. He admits that her grit outshines that of any pitcher he’s ever coached.

“[Brees is] the most competitive pitcher I’ve ever coached,” said Hines. “She can will herself to do things because of that, and it shows up in everything she does.”

“I guess failure is something you never want as an athlete, which is hard to say because failure is the only way you can grow. You learn from your mistakes,” Brees said.

She hopes that other athletes and students learn from this frame-of-mind and trust that one’s infinite room for success depends on growing through failure.

As Stanclift approaches her final season with Brees on the roster, she emphasizes that Brees will be leaving the Baker softball program better than she found it and has inspired others to do the same.

“That is more than any broken record or championship ring,” said Stanclift.

Brees reached her 1000th career strikeout during the Wildcats’ away game against Evangel. Since then Brees has received eight Heart Pitcher of the Week recognitions for 380 strikeouts and a .81 ERA.