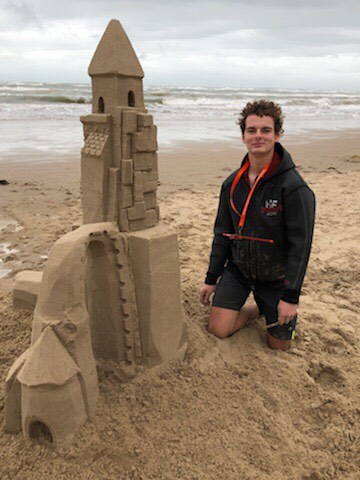 Freshman Max Hovorka has been building castles in South Padre Island, Texas since he was 6- years old. Hovorka teaches others the art during the summer.

Hovorka was born and raised in McAllen, Texas. Some of his best childhood memories were spent  around an hour away in South Padre Island, Texas, on the weekends, “the sandcastle capital of the world.”

When he was 6-years old, he found an interest in sandcastles. Some weekends his family would visit South Padre Island and he would get building lessons on the beach. Soon, he was perfecting his craft.

After participating in a total of five competitions in the amateur level throughout his career and winning all five, Hovorka still did not advance to the professional level. He decided to move on from competitions and pursue bigger and better opportunities.

“The lessons are a great way for families, friends or companies to experience team building,” Hovorka said. “They get to work together, have fun and learn a unique skill at the same time.”

On top of public lessons, the company has contracts with nearby hotels during the summer that offer lessons to hotel residents. That brings around 20 families every summer to the business.

Moving from South Padre Island, Texas, to Baldwin City, Kansas was a huge change for Hovorka. The cold winter in Kansas did not impress him, but he was able to work with the snow.

“I built a snowman and tried doing some snow carving here, and it actually went well,” Hovorka said. “Snow is pretty similar to sand, like a lot of people who carve sand also carve snow and ice. It’s harder to make small details in the snow, but it’s very good for sculptures.”

For Hovorka, snow does not compare to the enjoyment of building with sand. He revels in all of the little things during the process.

“Carving sand is such a weird feeling, but I love it,” Hovorka said. “It’s like cutting butter, so it kind of peels back and breaks off super-fast, it’s so satisfying.”

The process is very detailed. First, Hovorka packs up a big base for the castle itself. Then he uses 10- and 15-gallon Quirine powder buckets or large trash cans with the tops cut off to make a bowl in the middle in order to put water and sand inside. He stacks the wet sand in the buckets to make a pyramid and carves it from the top down. Once that is done, he uses a 2-gallon pail with the top cut out to create smaller additions to the top of the castle.

“The sand is actually really good because it’s from Rio Grande River in between Texas and Mexico, where the grains of sand are finite. When grains are smaller, they stick together better,” Hovorka said.

Once the building is done, he sometimes uses tools to carve designs and shapes. Hovorka sometimes sprays the outsides with a mixture of strong glue and water, which makes the entire structure as hard as concrete and ensures that it will last.

Horvorka’s favorite sandcastle he has ever built was completed last summer when he and his boss received a grant from the city of South Padre Island to build an amazing castle. In total, they used about 70 tons of sand to build the 15-foot-tall sandcastle. It is currently the biggest and tallest permanent sandcastle in the United States.

“Just packing up the sand and building the structure took a couple weeks of working on it every day, and then carving it took another two months,” Hovorka said. Childhood memories of fun in the sand have transformed Hovorka into the professional, creative artist he is today.

“When I was little, me and my friends used to play a game on the beach where we’d build little walls and have a main base, and when the tide was coming up we would go right up against the water to see who’s would survive the longest,” Hovorka said. “I think back to that memory a lot, and it makes me smile.”