Letter to the editor: Facts missing on Day of Giving piece 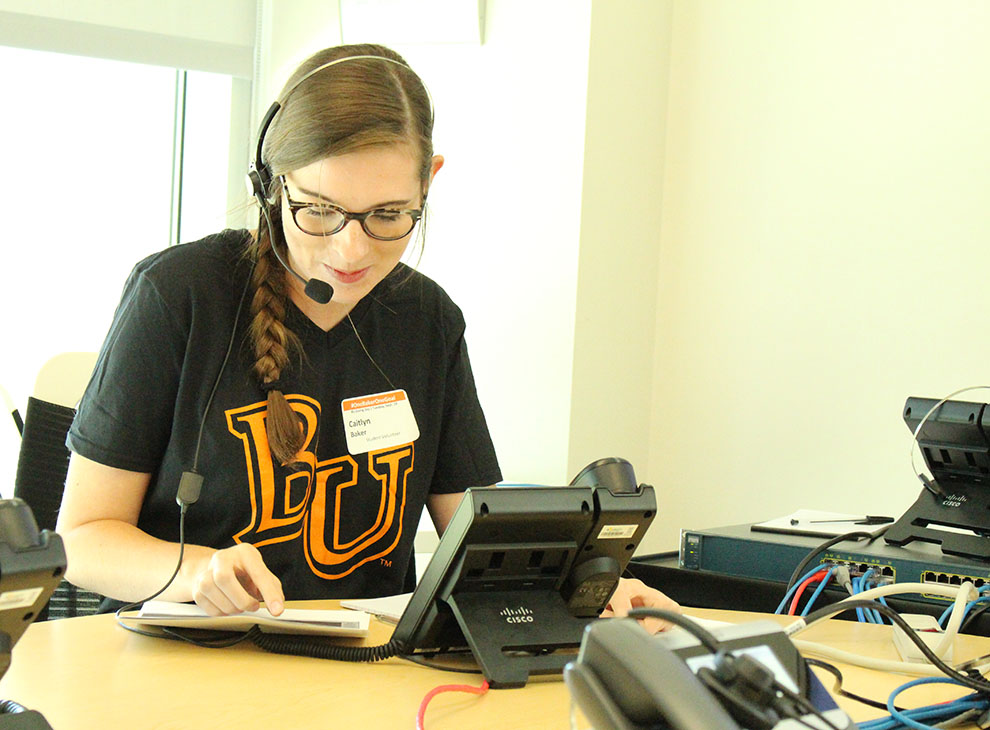 Freshman Caitlyn Baker calls donors to thank them for their support of Baker's 2018 Giving Day. 282 donors contributed to the $62,000 raised in the 24-hour event.

I am writing today in response to the latest staff editorial “Day of Giving faces mixed reviews.”

As the staff member charged with planning this event, a Baker University graduate with a mass media degree, and the former editor-in-chief of the Baker Orange newspaper, I was frustrated to see a lack of news in the paper surrounding Day of Giving, despite the criticism provided in the article.

Some of the key facts not included throughout the paper regarding Day of Giving included:

Baker University’s inaugural Day of Giving in 2017 raised more than $62,000 and those funds were exclusively used for student scholarships.
The 2019 Day of Giving goal was to raise $75,000 and we raised more than $128,000.
During this year’s Day of Giving there were 11 different challenges, mostly targeted toward alumni and friends.
There were two challenges specific to current students. These challenges each awarded $1,000 prizes that came from alumni. The first challenge went to the Fraternity & Sorority Life budget in honor of Delta Tau Delta, and the other was awarded to Mungano as the student organization with the most donors during the hour.
Several students participated as volunteers and we appreciated that as much as we appreciated those students who made a donation during the student challenges.
Donors could direct their gifts to the College of Arts and Sciences, School of Nursing, School of Professional and Graduate Studies, School of Education, or Athletics. The funds raised could be used at the discretion of the dean or athletic director to advance their programs and increase our student’s experiences.

While I recognize the piece was an opinion piece, there were also several errors throughout the article.

Within the article you stated that we were trying to “get donations for the University capital campaign.” The Forever Orange campaign is not a capital campaign, but a comprehensive campaign, that aims to touch every facet of university life. In addition to raising funds for capital projects, we’ve also raised more than $3 million for endowed professorships, $5.4 million for student scholarships, and $1.5 million for technology and student experiences, including athletic programs.
The “goal of having students donate now… is to encourage a spirit of giving after graduation” is also incorrect. Our goal in having students donate while still enrolled at the university is to give students an opportunity to take ownership in the success of the Forever Orange campaign and the impact that it will not only have on our current students but also the impact that it will have on future generations. Yes, we hope that in building that spirit of philanthropy now, students will already be in the habit of giving back not just of their treasure but also of their time and talents.
We recognize that college is expensive so that is why making a donation was not the only way a student could participate in Day of Giving. We also recognize that students donate to other organizations they are a part of, including their athletic teams, student groups, or their Fraternity and Sorority chapters. Participating in Day of Giving is aimed to strengthen the university that makes all of those opportunities possible.
The editorial also suggested that instead of making donations that students could volunteer and communicate their thanks to alumni. This is actually something that we had available for 11 hours throughout Day of Giving. Various volunteer opportunities, including making calls to donors was made available to students, and was communicated multiple times, and in a multitude of ways, including campus-wide emails, emails to Fraternity and Sorority Life leaders, to student organization leaders, through coaches to their student athletes, and by members of the Office of Development and Alumni Relations spending time in the student union signing up volunteers. In all, more than 65 volunteers made thank you calls during our Day of Giving event.

While I recognize, and value, a free college press, I do think it’s important to also have the value of honesty, and to present the facts. There were key facts regarding Day of Giving not included, which did not allow your reader the opportunity to form their own opinion about the event. By not including news about the event, but only an opinion, you missed out on a chance to educate readers on what this day really was all about. And that was a missed opportunity.

As a former editor-in-chief, Baker graduate, and now staff member, it is my sincere hope that with your next editorial you will give your readers the facts and allow them to form their own opinion based on what knowledge they have.