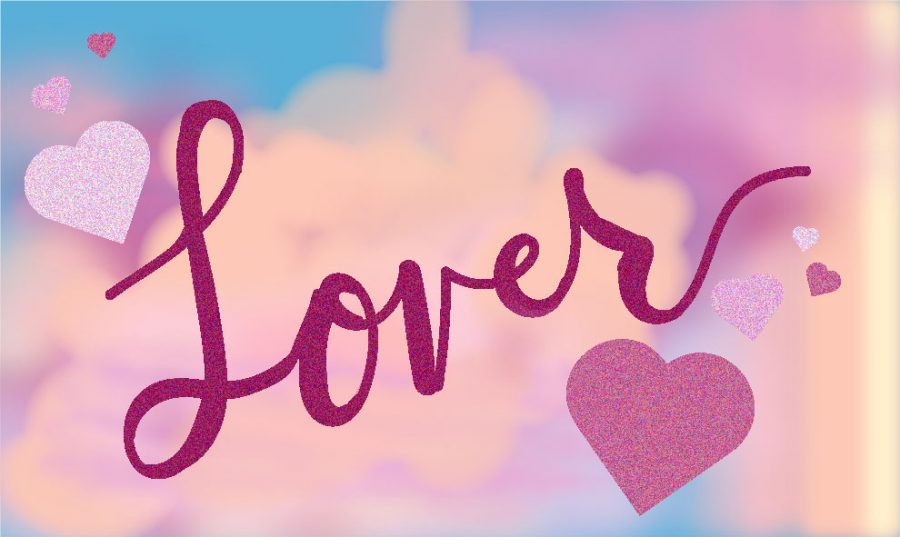 With her first album since 2017’s “reputation”, Taylor Swift uses the synth-pop sound that she debuted with “1989”, while using her signature elaborate and country-inspired lyrics that give her songs the ability to convey a story and emotion.

Rather than using the album to focus on what others are saying about her, Swift uses “Lover” to celebrate what she loves in life. “Lover” is new territory for Swift because the album talks about the love that she has found, not breakups or the love she desires.

After the dark imagery and different sound of “Reputation”, I did not know what to expect from “Lover”. The album opens with “I Forgot that You Existed”, singing “How many days did I spend thinkin’ ’bout how did me wrong” which allows listeners to make an educated guess as to who she may be singing about.

But after “I Forgot that You Existed”, there are no more obvious or blatant references to any feuds that Swift addressed in “Reputation”. Instead, the album includes songs about her love for her boyfriend, Joe Alwyn, lyrics of self-love, feminism, support for the LGBT community and a song for her mom in “Soon You’ll Get Better”.

Swift’s vulnerability is evident through her deeply personal songwriting. She uses “Lover” like a personal journal to document how she has evolved as a person since her “Reputation” era.

Shifting from writing songs about her tarnished public image to the important people in her life, the album shows Swift’s development and realization of what she values in life. “Lover” shows that Swift is writing songs for herself, not as a means of addressing what the public or tabloids say about her.

Although “Lover” has a style that is similar to the pop sound of “1989”, big-name producers, such as Max Martin and Shellback, are absent from “Lover’s” credits. The only producer and songwriter that frequently collaborates with Swift and works with her again on actual “Lover” is Jack Antonoff.

The diverse range of styles that Swift uses on the album also evokes the range that was on her 2012 album, “Red”. From songs with strong beats and hard-hitting lyrics, such as “The Man” and “You Need to Calm Down”, to the country-inspired Dixie Chicks collaboration “Soon You’ll Get Better”, Swift incorporates the pop-country genre that propelled her to stardom and the pure pop sound that has made her one of the biggest artists in the music industry.

In “Lover”, Swift is able to create a world without the feuds and publicity that have been a large part of her career. Swift closes the album saying “I wanna be defined by the things that I love, not the things I hate”. I think that this closing line shows a shift from the using her music to address her public feuds and the rumors about her to focusing on the positivity and love in her life.

Overall, I think this album shows Swift’s personal growth as an artist while demonstrating her expectational skill as a lyricist. Like her other albums, I was able to connect to the almost poetic lyrics in a way that gives the perception of feeling the same emotions Swift felt when she wrote the songs. I am glad to see that she has moved past writing songs as a means of dealing with public drama and is using her craft to create music that celebrates what she values.