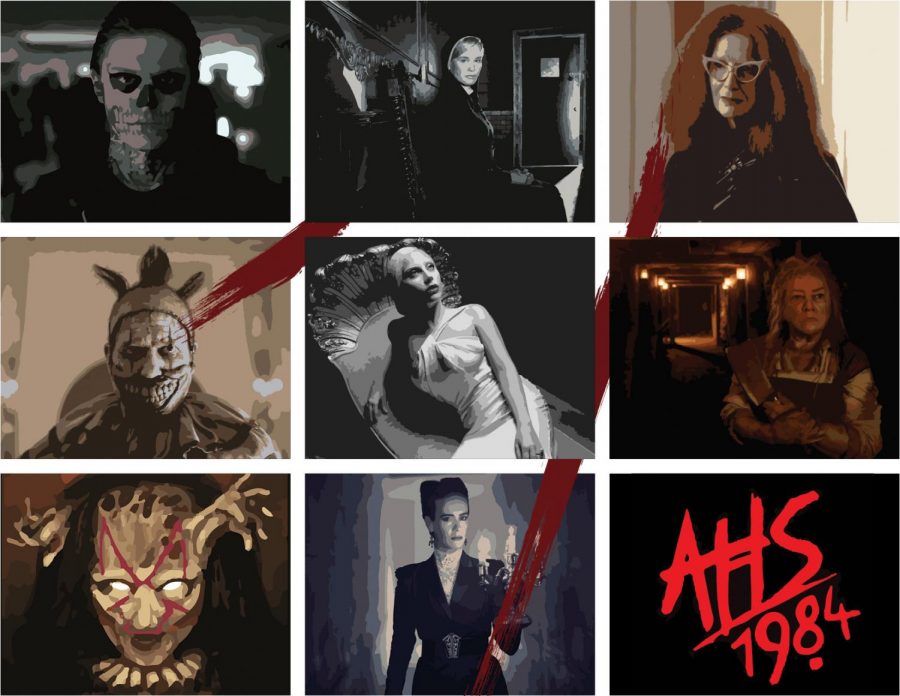 Will Hanson and Emma Howard

“American Horror Story” is an anthology horror television series on the FX network. The show is created by Ryan Murphy and Brad Falchuk, with each season serving as its own contained story with the same cast members as new characters.

An anthology series is any type of episodic media with each episode, season, segment, etc., presented as its own story.

The first season of “American Horror Story” premiered on Oct. 5, 2011. The freshman season of the show was not marketed as an anthology and was not given the official subtitle of “Murder House” until after its original run on cable.

Although “American Horror Story” was not the first anthology show, Murphy is credited with re-popularizing the format for television and the horror genre.

Popular shows such as “Tales from the Crypt,” “The Twilight Zone” and “The Masters of Horror” focused on each individual episode of the series being a new horror story to bring to audiences.

“American Horror Story” altered this by telling a story in 10 to 13 episodes and then moving on to the next one. While each season is mostly self-contained, especially in the earlier seasons, every season exists in the same shared universe.

The idea of a shared universe was popularized in 2008 when Marvel began the MCU with “Iron Man” and each film that followed was connected to others whether that be in small clues, or characters appearing more than once.

Murphy created his own shared universe within “American Horror Story.” The first three seasons, “Murder House,” “Asylum” and “Coven,” are completely standalone seasons, with only small references to each other or to future seasons.

The shared universe theory was proven to be correct in season four, “Freak Show,” when a character from “Asylum” returned in a supporting role. Following that season, the lines blurred more and more, bringing in more characters from old seasons.

The shared universe met its peak in season eight’s “Apocalypse,” as it served as a sequel to the stories from season one and three. The season included much fan service, as many important characters from “Murder House” and “Coven” appeared to finish their stories after a long period of time.

Although the show is fictional, many story points and characters are based off real events and people, with season seven, “Cult” being centered on the outcome of the 2016 presidential election. Marie Laveau and Delphine Lalurie from “Coven” were both portrayals of real-life women.

Following his new-found success with “Glee,” Murphy managed to create something just as successful. “American Horror Story” is widely known as being a global phenomenon and one of the talked about current television programs, in thanks to twitter.

With social media being commonplace, “American Horror Story” benefits from having crazy and over the top characters, seasons, and scenes that will trend on twitter. Being so praised and discussed on social media is a main factor in gaining new viewers.

Sophomore Tanner Hendrix is a fan of the show and has been watching for many seasons.

“Because every season is so different, but you don’t have to watch each season to get the full experience of the current one. You can jump into any season and catch on pretty quickly; that draws people in,” Hendrix said.

Season six, “Roanoke” went as far as to utilizing the found-footage format used in many popular horror films.

A large draw for many fans is that each is season attracts a different type of person, with many fan discussions being focused on which season is the best. Hendrix’s favorite season is “Freak Show” as it was the first season he watched and served as his introduction.

Actors such as Sarah Paulson, Evan Peters, Jamie Brewer, Taissa Farmiga and more, have made a stronger name for themselves due to the massive success of “American Horror Story.”

On top of creating new stars, the series has managed to cast already big names in each season, whether that be as a guest star, supporting role, or a leading role.

With the current seasons being held by a rotation of different actors and actresses, the first four seasons starred Jessica Lange.

All four of Lange’s performances earned her a nomination for a Primetime Emmy Award, with her winning for her roles in seasons one and three.

Overall, “American Horror Story” has received over 60 Emmy nominations during its eight-year run.

“You never know what is going to happen, it keeps you on your toes, ” senior Hannah Flynn said. “I love the unpredictability of it.”

The success of “American Horror Story” has led to many more horror anthology television programs, one being Netflix’s “Slasher.” “Slasher” follows the formula, but with each season following a new group of characters being terrorized by a killer.