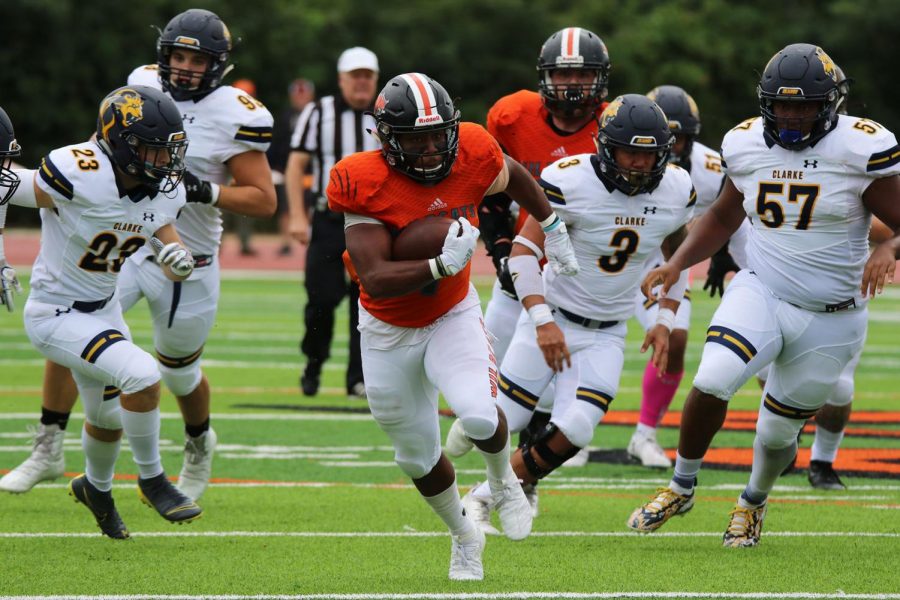 The no. 24 ranked Baker University Wildcats easily handled the Clarke University Pride as the Wildcats defeated the Pride 60-6 on Homecoming Weekend.

The Pride received the ball to start the game, but the Wildcats held the Pride to a three and out. Ethan Barnard gave the Wildcats a 3-0 lead to cap off the Wildcats first offensive drive with a 42-yard field goal. The first Wildcat touchdown came on the next offensive drive off of a touchdown pass from Marco Aguinaga to Sam Huckabee to extend the lead to 10-0. Running back JD Woods went on to add one more touchdown in the first quarter after a 48-yard run.

The Wildcats held a 17-0 lead heading into the second quarter. The Wildcats then capitalized off an interception by Mikeice Adams as Aguinaga found Huckabee once again for another passing touchdown. After a nine-yard run from Nigil Graves-Houston, the Wildcats went into halftime with a commanding 31-0 lead.

The Wildcats kept their momentum going in the second half and scored quickly with another touchdown run from Graves-Houston to bring the lead to 38-0. Halfway through the third quarter, the Pride scored their first touchdown of the game, but missed the extra point, making the score 38-6. Those would be the only points that the Pride would score throughout the game as the final score was 60-6.

“Getting a win for the school on Homecoming Weekend was our focus this week. Especially after the loss last week. We needed a big win going into the bye week” Aguinaga said.

The Wildcats head into a bye week before starting divisional conference play starting with MidAmerica Nazarene University at Liston Stadium on Oct. 19.