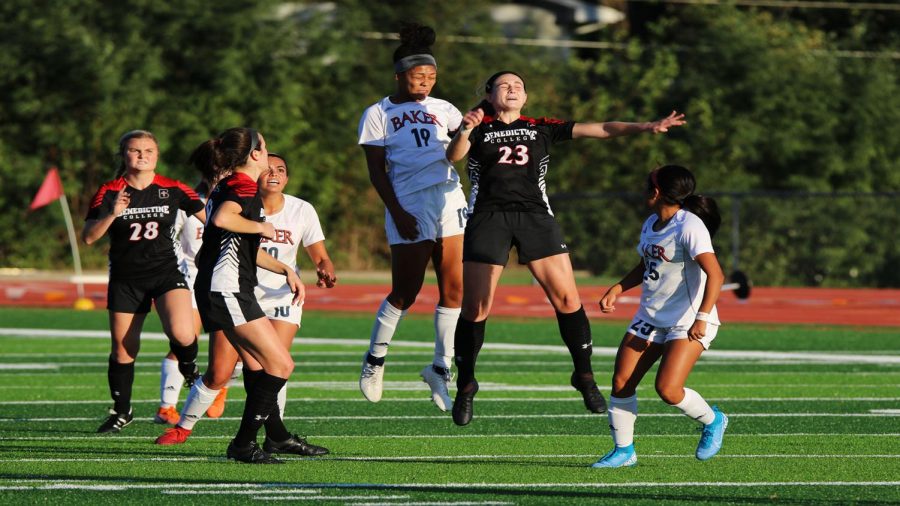 Junior Georgia Vernardakis jumps to contest a Ravens player for a header. Vernardakis records 1 shot on net in the win over the Ravens moving the Wildcats to 7-4-1.

The Baker University women’s soccer team knocked off No.11 ranked rival Benedictine College by a score of 1-0 at Liston Stadium. This was a big win for the Wildcats coming into the contest after a loss to MidAmerica Nazarene and a tie with Grandview University.

The Baker Wildcats and the Ravens held each other scoreless in the first half going into halftime with a score of 0-0. The Wildcats took the lead just 10 minutes into the second off of a goal by Victoria Aceves Power. That would be all it took as Wildcat goalie, Vanessa Silva, held the Ravens scoreless throughout the game managing one save off of five shots by the Ravens.

The Wildcats managed seven shots on the evening with four of those on goal. Two of those shots on goal came from Victoria Aceves Power.

Going into their next match up against Culver-Stockton on the road in Canton, Mo. the Wildcats have a 3-3-1 record in Heart of America conference play.