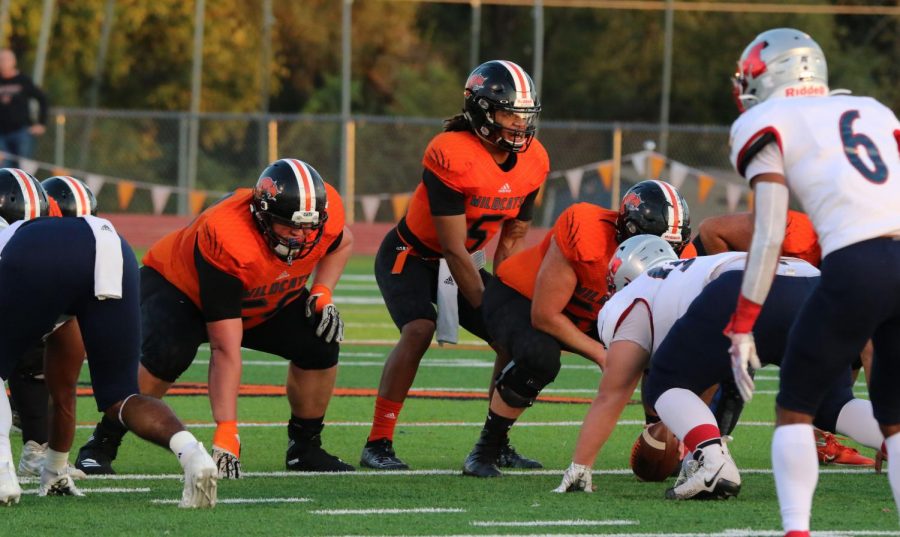 Junior Marco Aguinaga under center to receive the snap from center and junior Tyrus Bergeron. Aguinaga completes 15 of 21 attempts for 186 yards against MNU.

The no. 24 Baker University Wildcats opened up play in the Heart of America South Division by facing no.23 ranked MidAmerica Nazarene Pioneers at Liston Stadium. The Wildcats controlled every facet of the game to come away with a 49-20 victory over the conference foe.

The Wildcats did not waste any time getting on the scoreboard. On their first offensive drive the Wildcats drove down the field and JD Woods ran the ball in from eight yards out for a touchdown. Ethan Barnard nailed the extra point to give the Wildcats an early 7-0 lead. Earlier in the drive, Woods became the programs second all-time rushing leader.

The Wildcat defense held the Pioneers on the Pioneers next offensive drive to give the ball right back to Marco Aguinaga and the Wildcat offense. The offense kept the momentum going as Nigil Graves-Houston found the endzone from 13 yards out after another strong offense drive by the Wildcats. At the end of the first quarter the Wildcats led the Pioneers 14-0.

The Pioneers got their first points of the game in the form of a safety by sacking Aguinaga in the endzone to make the score 14-2. With five minutes left in the first half, Graves-Houston added another touchdown for the Wildcats off of a 49-yard run to bring the score to 21-2. The Pioneers responded quickly with a touchdown of their own with a 33-yard pass to make the score 21-9 going into halftime.

Coming out of halftime, the Wildcats fumbled the ball on the drive and the Pioneers took over. However, the Wildcat defense held strong and forced a turnover on downs to give the ball back to the Wildcat offense. The Wildcats drove down the field and scored on a two-yard TD pass from Aguinaga to Sam Huckabee to make the score 28-9. Before the end of the third quarter, the Pioneers would add a field goal to make the score 28-12 going into the fourth quarter.

In the fourth quarter the Wildcats would add three more touchdowns while allowing the Pioneers to score only one touchdown and to convert the two-point conversion. The Wildcat running game led the Wildcat offense as Woods and Graves-Houston led the wildcats with 144 and 148 rushing yards, respectively.

The no. 24 ranked Wildcats are now 5-2 on the season as they travel to Marshall, Mo. to take on Missouri Valley College Vikings in another South Division match up.