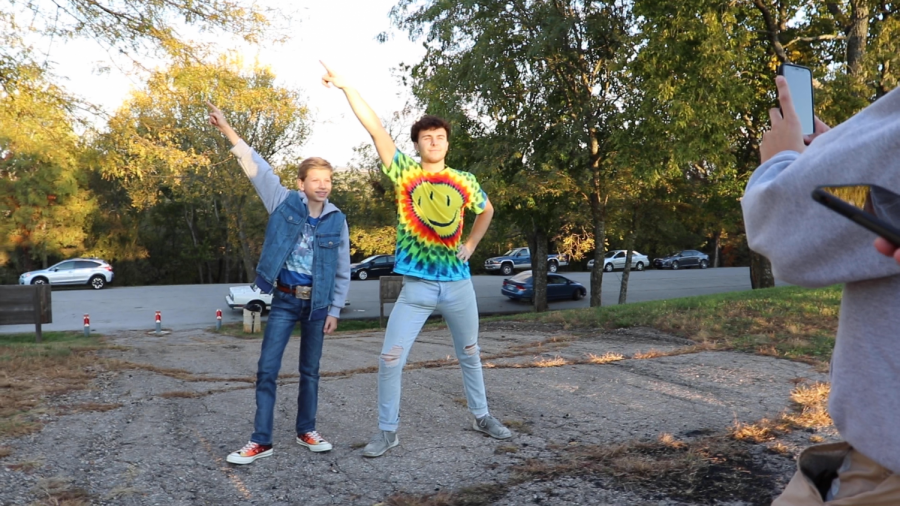 12-year-old country star Mason Ramsey strikes a pose with Sophomore Brendan Hulla at Wells Overlook Park. Hulla is a member of Sigma Phi Epsilon, one of the greek houses that won a social media contest to meet Ramsey. Hulla said that he and his friends like to strike this pose together in photos, so he was excited to have a celebrity take part in the inside joke.

“It’s all happened so fast, but it’s been amazing” Mason Ramsey said, describing his transition from performing in Walmart to going on a nationwide tour. Ramsey is currently touring the United States for his “How’s Your Girl & How’s Your Family Pt. 2” tour. The tour, which has stops in 24 cities, concludes in San Francisco on November 23.

Ramsey’s meteoric rise to fame, which started with a viral video of him yodeling Hank Williams’ “Lovesick Blues” in a Harrisburg, Ill. Walmart and has been propelled by appearing on The Ellen DeGeneres Show, performing at Coachella, and collaborating with Lil Nas X, shows a unique combination of viral pop culture and classic country western music.

Baker University’s Delta Delta Delta sorority and Sigma Phi Epsilon fraternity were given the opportunity to meet the internet sensation and country music star Mason Ramsey at Wells Overlook Park in South Lawrence, Kan. after winning an Instagram competition on October 19. Delta Delta Delta even created the Instagram account @bakertrideltlovesmason, which posted 387 pictures, to win the competition. Ramsey also had a show at the Granada Theater in Lawrence, Kan. that same night.

When Mason arrived at Wells Overlook Park, complete with Converse sneakers decorated with flames on the sides and an oversized belt buckle, he greeted his waiting fans with a shy wave and a “howdy”.  Despite his apparent shyness, Ramsey was quick to order the crowd to form a line to take pictures with him and yelled “Ten-hut!” to call everyone to attention for a group photo.

Mason also gave the crowd a private performance of his debut single, “Famous”. When warming up for the song his manager offered him water, but Ramsey said, “I never use water. I use soda… that’s how you do it.”

In April 2018, Ramsey signed a record deal with Atlantic Records and has released two EP’s, “Famous” and “Twang”. His debut single, “Famous”, peaked at number four on the U.S country music charts and has received over 45 million streams on Spotify.

However, within all of the fame that Mason Ramsey has received since the start of his career, he remains a 12-year-old boy. Mason was quick to show his love for basketball as he dribbled an imaginary basketball and pretended to shoot. After everyone was done taking pictures, Mason started an impromptu game of hide and seek.

During the game of hide and go seek, Ramsey’s manager announced that his Uber had arrived. “That’s fine,” Mason said and turned to the crowd, waving, “I’ll see y’all later,” and ran up the hill towards the parking lot.

When reminded that he will be 13 years old in less than 30 days by his manager, Mason said he doesn’t want to be a teenager. Life on the road a lot for anyone, meeting Mason Ramsey was a chance to see that despite the hectic schedule and sold out shows, he is still a 12-year-old boy.