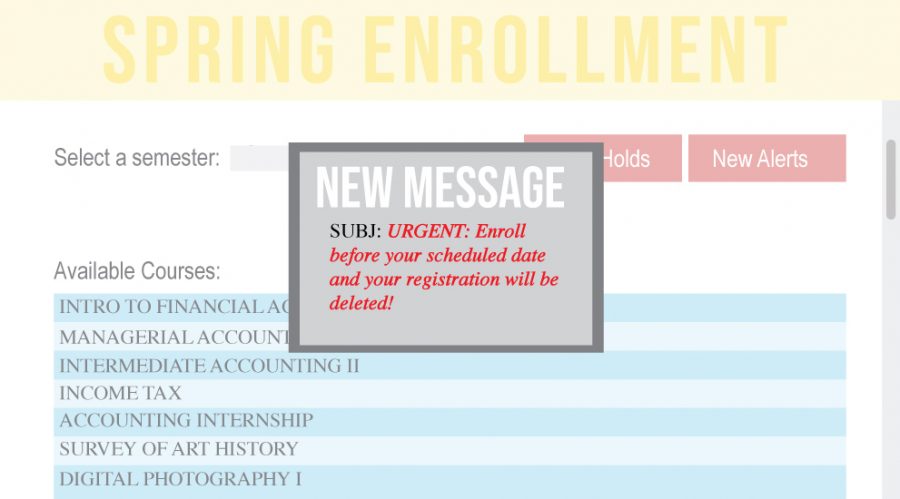 On Oct. 28, Baker students received an email from the registrar’s office in regard to students enrolling early. According to the all campus email from Ruth Miller, only honors students and senior level students who have accrued more than 98 credit hours were supposed to enroll on the first day of registration, Oct. 28 at 7 a.m.

Miller also mentioned in her email that the students who attempted to enroll outside of their scheduled time, after receiving the email and knowing registration was open, would have their schedules deleted and would be required to enroll in the registrar’s office after enrollment closed for all other students.

Junior Johnny Lee was one of many Baker students that decided to take the opportunity to enroll ahead of time. Although Lee was not scheduled to enroll until Nov. 1, he ended up attempting to enroll for the first time on Oct. 28.

“I was super excited and also confused on why I could enroll early,” Lee said. “I understand why the registrar has to kick out people from the classes they enrolled in, but I think that they could’ve used different language in the email.”

Why did the whole registration issue happen? And are students technically in the wrong because they took an opportunity that was right in front of them?

According to Miller, the whole registration ordeal happened because the online registration site was not communicating properly with student portals. The registrar’s office was made aware of the issue almost a week before registration was set to begin because some students had already started enrolling. Therefore, Miller was forced to send a campus-wide email explaining that students were only to enroll on the day assigned to them.

“Is everybody trying to play the system?” Miller asked, “I think not. But some students are.”

But the registrar also understands the students’ perspective and that some students really didn’t realize they were breaking any rules.

“Some students think ‘Since it let me register, I thought it was okay,’” Miller said.

“I thought ‘cool. I don’t have to wake up at 6:55 am now to enroll,’” Ketchum said. In contrast to Lee, Ketchum thought the registrar should delete the schedules of those who enrolled early, even after doing it herself.

“I think that if I wasn’t able to get into a class because underclassmen enrolled in it first, it would have annoyed me,” Ketchum said.

The registrar’s office held a meeting with freshmen on Oct. 29, which aimed to teach them how to enroll for the first time. In this meeting, the freshmen were told that mostly sophomores and juniors took the opportunity to enroll early, with few seniors and absolutely no freshman  enrolling early.

After all is said and done, Miller and the registrar’s office only want students to be fair to themselves and one another.

“If someone thinks about enrolling just a little early, that is still disenfranchising your fellow students,” Miller concluded

“Maybe it’s a good lesson in what is right. Just because we can doesn’t mean we should. Let’s all be good citizens and be fair to one another.”