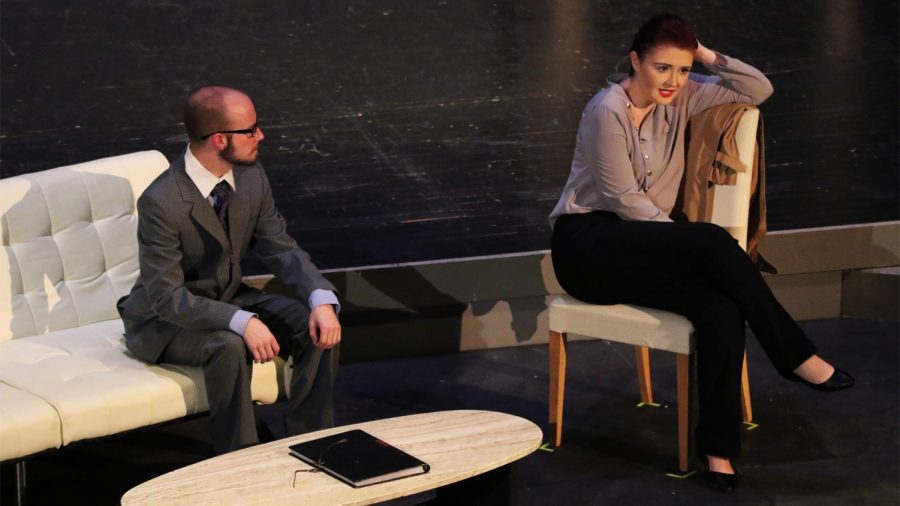 “Hedda Gabler” is a drama written by playwright Henrik Ibsen and premiered in 1891 in Munich, Germany. The role of Hedda is recognized as one of the greatest dramatic roles in theatre.

The play follows the newly married character of Hedda who is bored with her life as she finds it unexciting and boring. Hedda than decides to spice up her own life by wreaking havoc in the lives of others.

Many of the prominent actresses that have played the role of Hedda include Ingrid Bergman, Maggie Smith, Jane Fonda, Annette Benning, Cate Blanchett and Rosamund Pike, among many others.

The theatre department has chosen this play for their fall production. Sophomore Kenzie Kuhlmann stars in the title role as the manipulative anti-hero.

“She has so many layers to her, that I actually had to go to talk to Dr. Robyn Long about my character,” Kuhlmann said. “She (Hedda) is really messed up.”

Associate Professor of Theatre, Tom Heiman, chose to put on this production after having it on his wish-list for a long time. When Heiman came across an updated version of the script that featured contemporary language, he decided it was the right time for the production.

Along with using a script with updated language, Heiman made the creative decision to move the setting to 2019. Along with changing the year, a female student was cast in the role of Ejlert Lovborg, which was originally written as a male.

“It changes it in the fact, that it modernizes (the show). It shows the impact that woman can have on women, rather than the original of men impacting women,” Garber said.

Heiman came across a LGBTQ version of the script and was inspired to go in that direction as well.

“The same-sex relationship added a whole new layer,” Heiman said. “Not long ago, I would have had some resistance, but this cast was very open and accepting to it.”

Garber believes that adding the LGBTQ element makes sense for the playing being set in modern day.

Along with being a famous production, “Hedda Gabler” contains subject matter that could easily be considered as “triggering,” but are crucial in the story and meaning of the play.

“Suicide prevention is always important. Hopefully this (play) can get people talking about the issue,” Heiman said.

As the story and especially the ending of production heavily revolves around the contemplation and action of suicide, the cast and crew have taken it upon themselves that the Baker community is well aware of the content before deciding to see the play.

“Great power comes with great responsibility, and we all have power as fellow humans on this earth to impact each other,” Garber said. “We need to be aware of this issue and just be kind to one another.”

In preparation of the performances, the cast and crew have chosen to table in the union as a way of educating suicide awareness to students through promoting the show.

“We had this really good idea to have people write down their insecurities on paper, and they get put into the book that is burned during the events of the play,” Kuhlmann said.