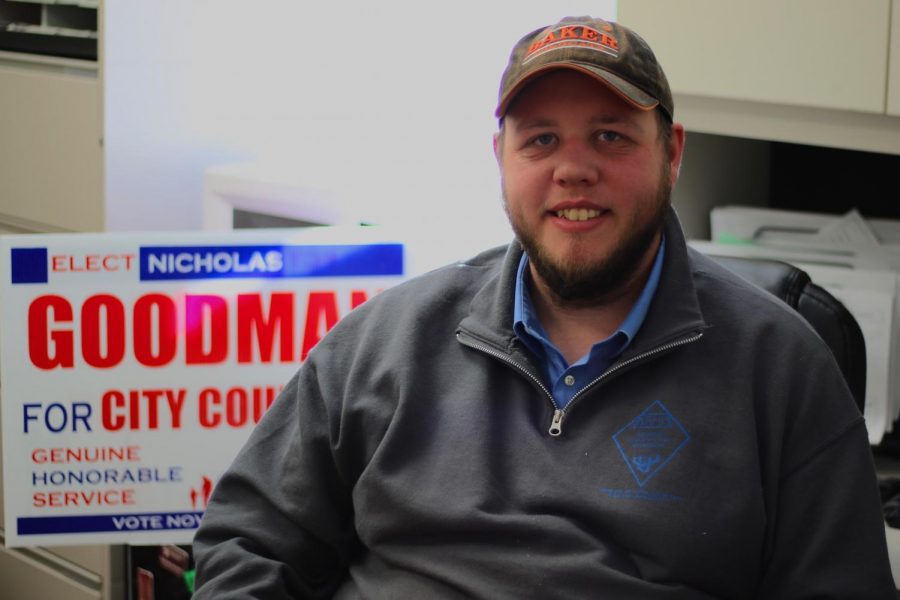 Director of Residence Life and Conference Services Nicholas Goodman runs for city council. The results of the elections on Nov. 5 show Goodman with 122 votes placing him in last place.

When Residence Director Nicholas Goodman applied to run for City Council of Baldwin City in Jan. 2019, no one else had applied, so he decided to rise to the occasion. Right as the deadline was approaching in May 2019, six other people applied. With only three spots open, this made his competition instantly tight.

From a young age, Goodman has been interested in serving his community. He enjoys finding solutions and compromises to problems, and city government was one way to do that. “I’ve always been interested in governing, but not politics,” Goodman said. “I have never been a fan of the politics that end up going with governing. I figured that with city government there are some local politics, but we’re truly staying on the issues.”

In his candidate profile on the Baldwin City Chamber of Commerce website, Goodman stated his motivation for running: “I am running to serve my community that has given me a home. Too often, we take for granted our surroundings and are comfortable sitting on the sidelines. I wish to give back to the community that gave me so much in the last several years. The least I can do is offer to give a piece of myself in humble service.”

When he noticed no one else was running, he thought it was only right to fill the spot himself. With that, he campaigned with the slogan “Genuine, Honorable, Service.” Goodman put up signs around town and creating a Facebook advertisement that ran for a week prior to the election to campaign.

“I ran on an agenda of no agenda,” Goodman said. “I don’t believe on the City Council you should necessarily have an agenda, you should represent whatever the community wants at any given time.”

A particular value, however, that he emphasized in his campaign was transparency. He believed the city had done an inadequate job of outreach toward the community. Most city information and open forums had been given mainly over Facebook, which he felt was not appropriate for Baldwin City’s aging community. “Baldwin is mostly single family residences and retired individuals, who tend to be in their 50s, 60s and 70s, so Facebook is not the best mode of communication for this town,” Goodman said.

Goodman’s master plan was to find other ways to engage people, like having meetings in public areas. He envisioned groups going to Homestead Kitchen & Bakery or the retirement home for meetings and City Council members going to baker to discuss what the students want.

This year marks Goodman’s eleventh year on a college campus between his undergraduate, graduate, and his professional career. He grew up in Kenmore, Washington, a suburb of Seattle. He graduated with his undergraduate degree from Washington State University in 2013 and then went on to Fort Hays State University for his master’s degree, graduating in 2015. His first professional position was at the University of Jamestown in Normandy, North Dakota. After working in Residence Life there until 2017, he was hired at Baker.

Here at Baker, Goodman is in charge of all four residence buildings. He lives full time in Gessner Hall on campus as a requirement of his job, he says.

Because of his experience, he felt he could represent a college campus. Since the population of Baker is about 20 percent of Baldwin City, he felt it would be necessary for Baker to have at least one representative out of the five representatives on council.

Local elections took place on Nov. 5. When the Unofficial Election Night results were revealed, the fate of the city and Goodman laid out in the open. Goodman racked up 122 votes, 5.97 percent of the total votes, putting him in last place above the write-ins.

Cory Venable received the most with 458 votes, Julie Constantinescu in second with 429 votes and Scott Lauridsen in third with 409 votes. Though Goodman lost, he was content with his decision to run and his efforts.

“Out of all seven people that ran, there is no bad choice. We all have a heart of service and have the best interest of Baldwin, and I’m happy that we have people who are willing to step up and serve,” Goodman said. He is unsure about his future plans to run for office again, but he plans to take his life one day at a time.