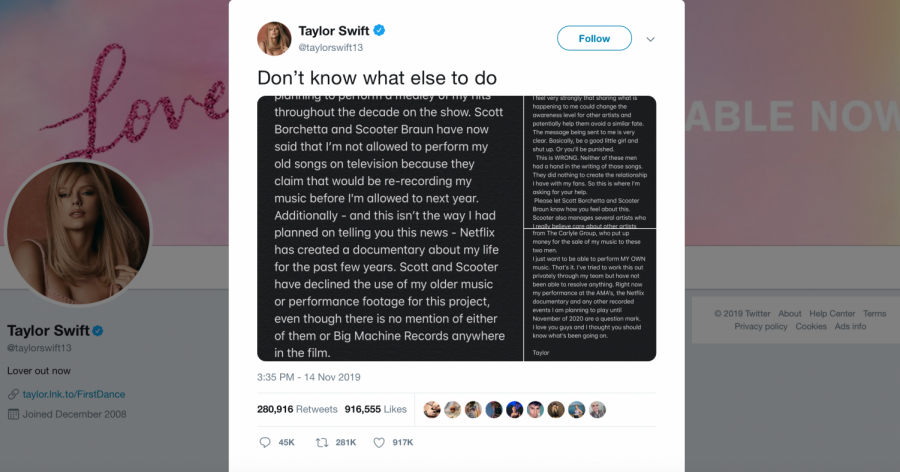 Taylor Swift has recently been followed by a great controversy. Swift has lost the rights to her old songs, which she recorded while still under contract with the music label Big Machine—a contract she signed at the age of 15. Swift has recently switched labels, joining Universal Music Group. Swift took to social media to both bring awareness to her situation and attempt to make a change.

With the acquisition of her music rights by popular talent agent Scooter Braun, came issues with Swift being able to perform her old songs. Swift has been named Artist of the Decade at the American Music Awards (AMAs) and was not going to be allowed to perform a medley of her work throughout recent years.

According to ES. Insider, Swift also released that she was being featured in a Netflix documentary that utilized her old work and would not be able to release it without Braun’s permission. Swift wants her music to be returned to her and for other artists to become aware of the challenge she is facing.

The sale of Swift’s music rights hindered many of Swift’s plans, so she called out to her fans for help. The call out by Swift had fans reeling and they jumped into action—causing Scooter Braun’s office to shut down due to threats and overloaded phone lines.

“Her fans love her and would do anything for her. They are a force to be reckoned with. They have more influence than people think and by posting the situation it shows how nasty the music business really is. I also think she did it to help other artists who could be in the same situation,” Emerson said. 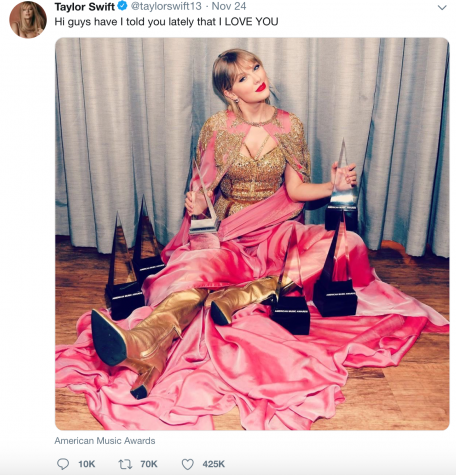 Swift also chose to call out Scott Borchetta, the founder of Big Machine, claiming that he was aware of Swift’s dislike of Braun and their problematic past. Swift claims to have been bullied by Braun and some of the artists he represents.

During the aftermath of Swift’s post, Braun took to social media to tell his side of the story, explaining that Borchetta gave Swift a heads up of the transaction before it went out to the public and explained that Swift was given the opportunity to buy her music rights prior to his purchase.

Swift denies both of these claims, but Borchetta included a picture of his final offer for Swift to remain at Big Machine in his Instagram post, making it difficult to tell who is actually telling the truth.

Braun explained that Swift’s father held a share in Big Machine Records and was invited to the meeting that discussed the sale. Swift’s team denies that her father was on the Board of Directors and therefore he did not have prior knowledge of the sale. He was invited to a phone call about the deal but chose not to attend due to his inability to share any of the information being discussed.

Throughout the fight, Swift was met with both support and backlash from fellow artists. Singers Kelly Clarkson and Halsey clearly sided with Swift while Sia, Demi Lovato, and more sided with Braun.

As the fight raged on, Braun and Swift were able to strike a deal. According to Rolling Stone, the teams agreed that Swift would be able to perform her old songs when agreed upon from both sides—which allowed for Swift’s AMAs performance to go through. While Swift did not comment on the feud during her acceptance speech, she did wear a white button down shirt with the names of her past albums written on it as a statement on the issue.