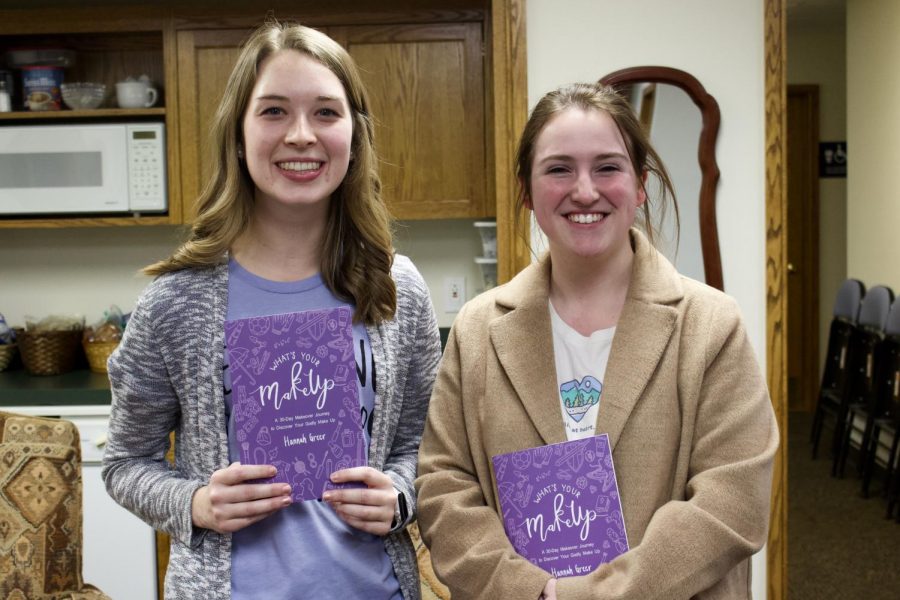 (left) Senior and Author Hannah Greer self-publishes "What's Your Makeup?: A 30-Day Makeover Journey to Discover your Godly Makeup" a devotional for women. Greer worked with senior Erynne Jamison, an art minor, to create the cover of the devotional.

Publishing a piece for the first time is something every aspiring writer looks forward to. Writing a book can be a long and detailed process, but for senior Hannah Greer, it was all worth it in the end. Greer is an English and Education double major at Baker who recently released her first published book.

Including everything from a copyright page and a title page to main points and a conclusion, the book totals up to about 45 pages. The majority of it consists of a 30-day plan to discover one’s true self. Every day readers will read one page, teaching them about a quality that women have based on the Bible, adding up to 30 days.

She uses the makeup analogy to explain how women spend time on their outward appearances when what they are truly made of, personality and character, is from God. “The main thing I want [the reader] to take away is that you are God’s child and he designed you to have all these amazing qualities I talk about in the book. Once you realize that, your identity will be in those qualities and not the things of the world,” Greer said.

A side point of the devotional is to prove science and religion work together, rather than being completely separate entities. To help make this argument, Greer decided to do a quick campus study, handing out surveys to women in dorms and all the sororities. The two-question survey listed 30 personality qualities and asked these women to circle five that they currently possess and five they hope to possess in the future.

Greer began this project about a year ago during her junior year when she was working on her honors project. She had written devotionals during her high school years, but she had never thought about publishing any. She knew this one was special and wanted to take it to the next level.

She met with her bible study leader Marissa Olson to make sure her work was biblically sound. Olson attends Fellowship Bible Church here in Baldwin City.

“I mostly helped by reviewing the Biblical passages to make sure each of them were not being taken out of context according to the original meaning and intent of the passage,” Olson said “,but really she had done a great job and [I had very little suggestions].”

Olson expressed how proud she was of Hannah as a person and a writer. “I love that Hannah cares about women and wants them to experience the same love from God that she has found and experienced,” Olson said. “I love her use of words to communicate life changing truths. And she’s just super kind, gentle and fun to be around.”

After finding satisfaction in her writing, Greer moved on to the next step. During the summer, she looked into the publishing process. To publish with a big name company would be difficult because she would need to have an agent, the money and the resources. So she thought she might self-publish. She quickly realized self-publishing also costs a lot of money. When she heard about the opportunities Amazon offers, she was ecstatic.

With a small self-publishing company, authors receive help with parts like designing their book covers and advertising. On Amazon, writers can self-publish for free because they do everything by themselves. Greer decided to pay a friend on campus, senior Erynne Jamison, to design her cover. Jamison is an art minor and worked with Greer over the summer into the beginning of the semester to draw up the whole cover.

Once the final product was finalized, Greer worked on Amazon, formatting the inside pages so it looked like a real book. She then published it. Besides a couple of people who provided help, Greer did everything herself.

Since the book has been released, Greer has sold about 50 copies through Amazon and 20 to 30 copies herself. Her goal is to sell at least 100. Through Amazon, copies are not printed unless someone purchases them and has it shipped. Greer found that she can buy author copies for cheaper and just sell them herself, so she has been buying 20 or 30 at a time and keeping them at home to sell in person. It is now also being sold at The Nook here in Baldwin City, and she plans to look at other small bookstores in the Kansas area. The paperback sells for $8 the e-book for $5.

Though Greer will sign copies any time someone asks, she had an official book signing on Dec. 5.

After such a successful first try, Greer wants to continue at a higher level when she has the resources. “This one I felt was a really good start. When I become a teacher, I’ll have the summers to write. I want to look into getting an agent, so once I establish my career, I will be able to set money aside for an agent and other advancements.”

Greer felt she learned what it takes to be an author through this process. She gained experience with leading a study and how to truly develop research and content. The most substantial lesson, though, was much deeper.

“I realized how important this topic is for girls my age and for myself,” Greer said. “I gained confidence in myself to be able to write [pieces] that other people will enjoy and learn from.”

Check out her book here.