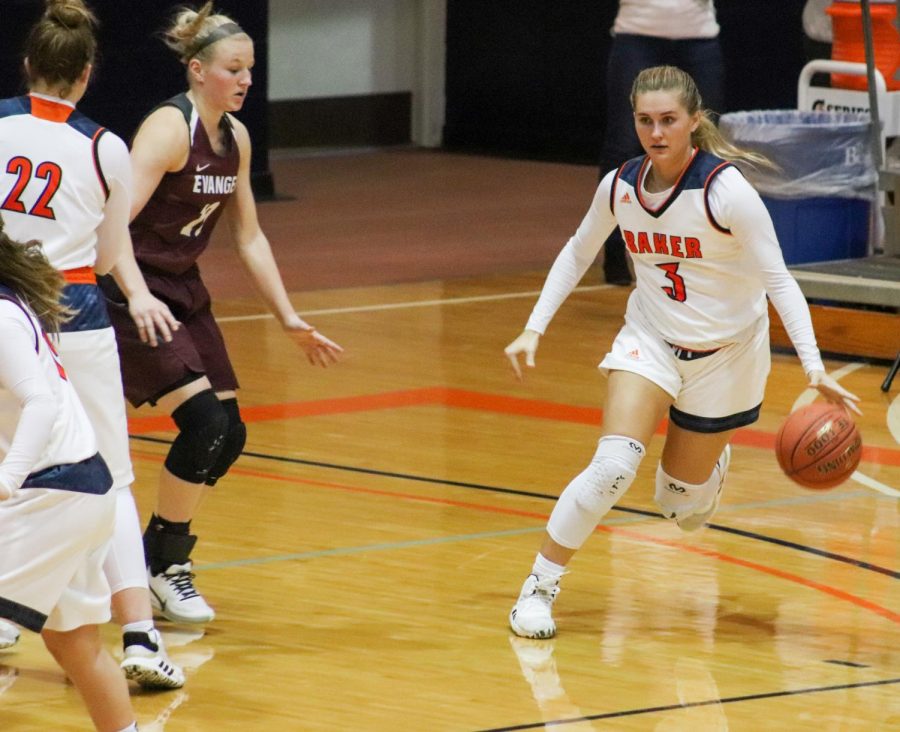 Freshman Turner Mattingly prepares to bring the ball to the hoop. The men's and women's games where sponsored by Student Activities Counsel as a part of spring Wildcat Welcome Week.

In their sixteenth conference game of the season, the Baker University Wildcat basketball teams competed at home against the Evangel University Crusaders on Thurs. Jan. 30. Both games were battles, but the Crusaders ultimately rose above to secure wins in both the women’s and men’s games.

The women’s team was led by Junior Abby Bird who maintained a strong performance and ended the game with 21 points. Freshmen Brooke Habeck and Leah Vanweelden scored 11 and 12 points respectively.

The Wildcats were consistently behind throughout the game, but were able to climb back up toward the end of the first half, making the score 40-31 Evangel at halftime.

After a well fought game, Evangel solidified the win, 89-56. The loss moves Baker’s record to 8-12 overall and 5-11 in Heart of America play.

The men’s team started off trailing, but came from behind to tie the game 26-26 with just over eight minutes left in the first quarter.

Senior Brett Elifritz came out on fire from the get go, scoring two layups back-to-back in the first quarter. Elifritz ended the game with 14 points. Senior Brandon Clifford also racked up 14 points. Junior Charles Fisher fired up the crowd by nailing a three point buzzer beater going into halftime giving the Wildcats the 44-40 lead going into the next half.

For the rest of the game, the two teams went back and forth, charging at each other and putting up shots to keep the game very tight. After battling it out, Evangel was able to pull out the win, 93-84.

The Baker offense proved to be powerful, shooting 60.3% from the field and 50% from the three-point line. Freshman Kobe Buffalomeat led the offense with 16 points. Fisher showed himself to be a well rounded player by finishing the game with 13 points, four rebounds, five assists and two steals.

The loss brings Baker’s record to 10-11 overall and 8-8 in Heart of America play.

Both the women’s and men’s teams will travel on Feb. 1 to Des Moines, IA to go head-to-head with No. 19 Grand View University.