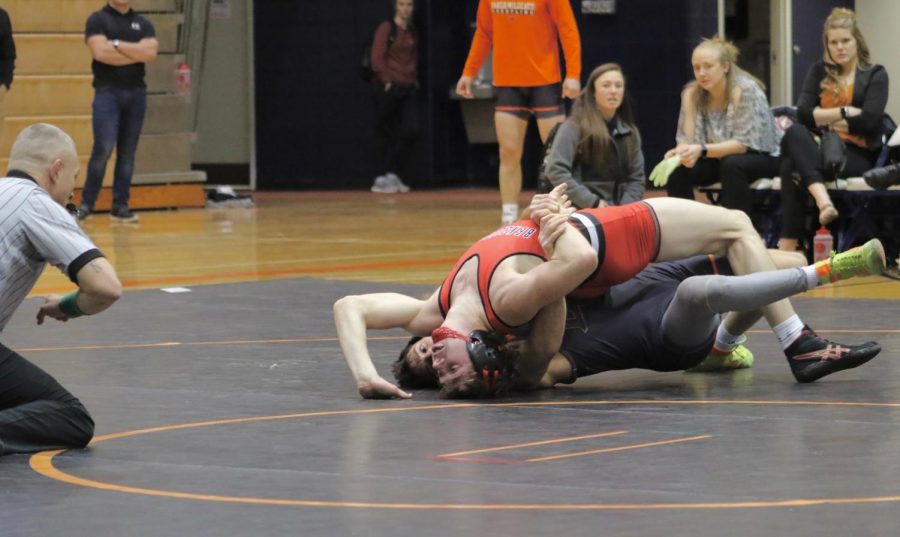 After a tough loss last week at the hands of Missouri Valley in Canton, Mo. the No. 6 ranked Baker Wildcats dominated the Benedictine Ravens to get back on the winning track inside Collins Center on Fri. Jan. 31.

It was pure domination from the very start as Emmanuel Brown started the night off in the 125 lbs. division by pinning his opponent David Boucher 44 seconds into third period.

Zane Baugh, Asiel Flores and Levi Green all secured wins in their respective weight classes by forfeit, giving Baker a 24-0 lead heading into the 157 lbs. match.

Benedictine tried to avoid the shutout as Wildcat, Colby Johnson, fell behind early to Raven Michael Hummer early in the first period. However, Johnson prevailed and outlasted his foe for a narrow 8-6 decision win.

A dominant 17-6 decision win was then posted by Isaiah Luellen, adding to what has already been a very memorable freshman campaign for the 165 pounder.

Back to back second period Technical Fall wins followed as the senior tandem of Lucas Lovvorn and Jacob Smith both dominated their opponents giving Baker a 41-0 lead.

The most impressive performance on the night would come from 197 pounder, David Dow, as he secured a first period pin win only one minute into the opening period.

With the responsibility of the shutout lying square on the shoulders of Freshman Heavyweight Wyatt Cox-Halliburton, all of Baker fans inside Collins Center rose to their feet. Cox-Halliburton would respond posting a dominant 9-3 decision victory, keeping his opponent off the scoreboard until late into the final period and securing Baker the 50-0 shutout win.

The shutout brings the Wildcat’s record to 11-4 in dual meets this year. The Wildcats found themselves back in action this past Sat. Feb. 1 against Ottawa University and Wayland Baptist University inside Collins Center at Baker University.