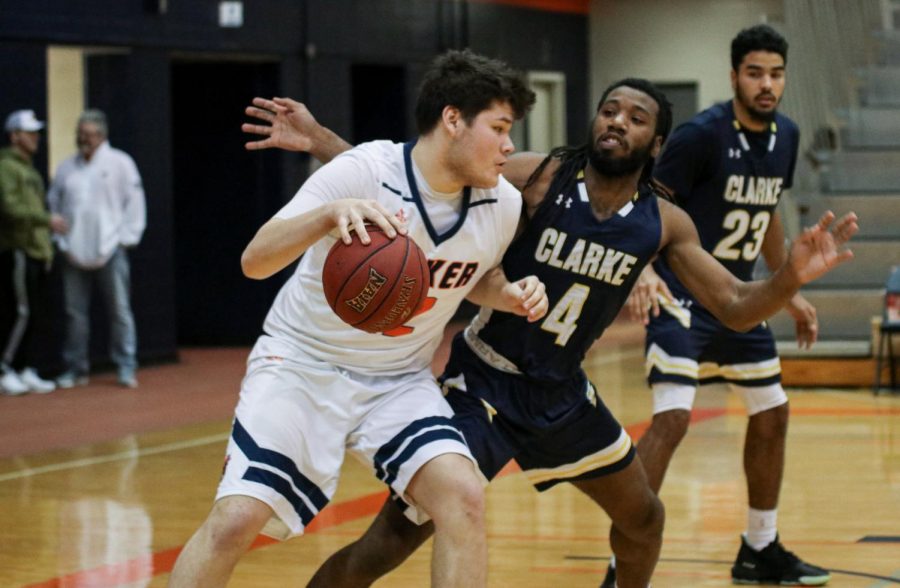 Freshman Kobe Buffalomeat takes the ball underneath for two.

The Baker Wildcats basketball teams hosted the Clarke University Pride at home in the Collins Center on Feb. 8. The women began their game at noon, and the men followed with their own tip off at 2 p.m. The Wildcats fought for a home win, but ultimately fell to the Pride in both games.

In the women’s game, the Wildcats battled hard with their biggest deficit being 10 points going into halftime with the score 28-18. Coming out of halftime, the Wildcats maintained their deficit of ten as the third quarter ended with the score 52-42. The Wildcats fought hard throughout the fourth quarter, but ultimately fell by a score of 64-57. This brought their overall record to 8-15.

The Wildcats men’s team started the game off hot with senior Brandon Clifford and freshman Aaron Nancorrow hitting back to back shots. This gave the Wildcats an early lead of 11-8 in the first quarter. A three-point buzzer beater at the end of the half gave Clarke the lead going into the half with a score of 33-27.

With three minutes remaining in the second half, Clifford hit a three-point shot to tie the game at 63-63. The game continued scoreless for a minute and a half before Clarke hit one of two free throws. Only 20 seconds later, the Wildcats regained the lead with a layup from senior Brett Elifritz. This lead could not be maintained, as Baker fell to Clarke 70-65, bringing their record to 12-12.

Bakers men’s Basketball players traveled to St. Louis, Mo. to take on Harris-Stowe State University today at 7 p.m. The women’s team, on the other hand, will travel to Papillion, Neb. to take on Nebraska Christian College at 7 p.m.