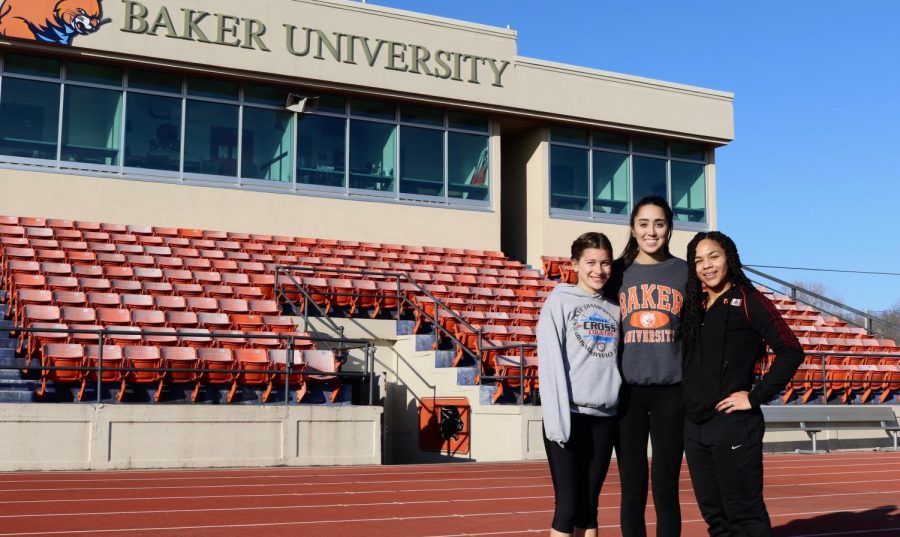 (Left) Junior Emily chambers, freshman Talisa Stone and sophomore Brittney Wesley have qualified in their respective events for the NAIA Indoor/Outdoor National Championship. Among the accomplishments, Stone breaks a school record in high jump as a freshman.

Even though it is still early in the season for the Wildcats Track and Field teams, there have been a multitude of athletes that have already qualified to compete at the 2020 NAIA Indoor National Championships in Brookings, S. D. on March 5-7.

Freshman, Talisa Stone, qualified in the Wildcats first meet of the season at the Scott Nisely Classic on Jan. 18 at Doane University in Crete, Neb. Stone also broke the school high jump record in this meet with a jump of 5’7.25” or approximately 1.71 meters. Stone was not aware that she broke the record, or even was about to, until her teammates ran to congratulate her after she was done competing in the event.

Despite all of Stone’s success and awards in high school, she is most proud of her accomplishments here at Baker University so far. Stone said, “I am most proud of my first meet for Baker. It felt good to see everything finally come together in such a big way and I felt like I made my family and supporters proud too.”

Even though Stone is a freshman, she has the athletic and mental fortitude to compete on the national stage and has a very bright future ahead of her here at Baker University.

Junior, Emily Chambers also qualified for nationals very early in the season. Chambers will be participating in the 2020 NAIA Outdoor National Championships held May 21-23 in Gulf Shores, Alabama.

Chambers earned her spot at Nationals after qualifying at the Mel Tjeerdsma Classic on Dec. 8, 2019 in Atchison, Kan. while competing in the marathon. Chambers qualified with a time of 1:30:01 while placing third in the meet. This will be Chambers second time competing in the marathon at NAIA Outdoor Nationals.
“I stay dedicated and never shorten myself by not pushing myself to the best of my abilities. The days I don’t want to work out, I work out the hardest.”
When asked what accomplishments that she is most proud of, Chambers said, “qualifying for this year’s nationals would have to be the one I am most proud of.” However, she also emphasized that she is looking forward to competing in outdoor track this year and is striving to break her personal bests in the 5k and 10k.

Chambers had a lot of success to choose from as her biggest accomplishment. Last year she was selected to the All-Academic Women’s National Team. Previously this season, Chambers recorded a personal record in the 5,000-meter run, beating her previous time by 45 seconds at the Pittsburgh State Invitational. Chambers was also a member of the women’s distance medley relay that earned First-Team All-Conference honors in 2018.

Chambers has a long list of success for the Baker University Track and Field teams and will look to continue that success this year at the 2020 NAIA Outdoor Nationals.

Sophomore Brittney Wesley also joins Stone and Chambers as athletes that have qualified for nationals. Wesley qualified for the 60-meter dash during the Kansas State Winter Invitational with a time of 7.82.

Wesley was very relieved when she found out that she had qualified. Last year Wesley was .05 meters away from qualifying for outdoor nationals in long jump after she jumped 5.60 meters. It was a relief for Wesley to find out she finally qualified for nationals in an event after missing by a slim margin last season. Wesley credits her mindset and perseverance as her biggest accomplishment and the reason she was able to hit the qualifying mark in the 60-meter dash.

“I stay dedicated and never shorten myself by not pushing myself to the best of my abilities. The days I don’t want to work out, I work out the hardest.”

Wesley is looking forward to competing in the outdoor season coming up. “People tend to perform better outdoors, so seeing that I have been going above my expectations indoor, I’m excited to see what I do in outdoor.”

Track and field can be seen practicing year-round in preparation for indoor and outdoor season. The athletes start training for preseason in August, competing in December and continue competing through May.

Stone, Chambers and Wesley will represent Baker University on the national stage and are prepared to do so successfully.