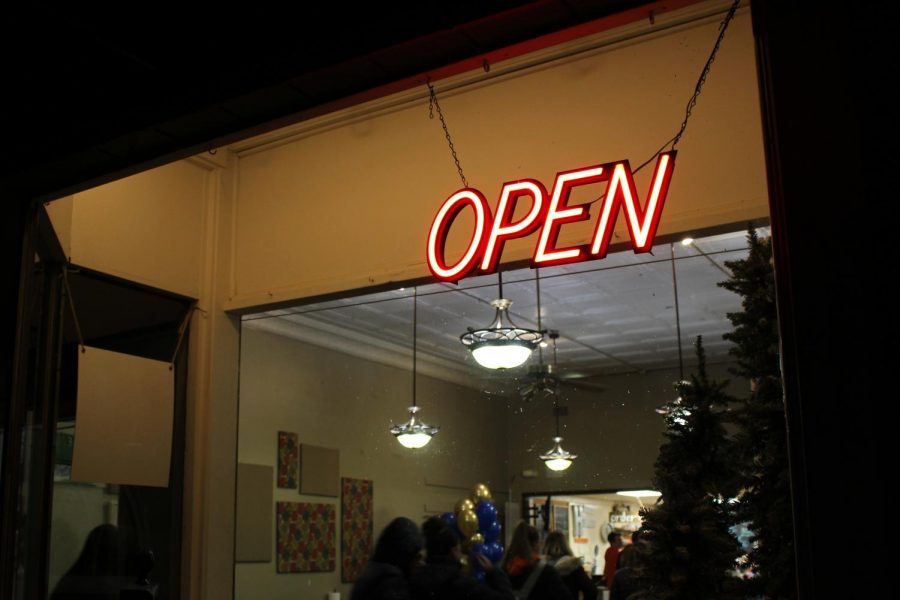 Late Nite is open 9 p.m. to midnight every Sun. through Thurs.

On Feb. 9, Baldwin City welcomed a new, student-run restaurant to the community. Late Nite is a dessert and breakfast themed restaurant that was inspired by the needs of college students but is welcome to all.

Junior Dylan Kort said he has always dreamed of opening a restaurant but hasn’t been able to make that dream a reality until now.

“Baldwin City really needed a restaurant that stayed open late for the college students and the juniors and seniors in high school who tend to stay out later,” Kort said.

After trying unsuccessfully to come up with a few business ideas, Kort decided to partner with Zeta Chi house director and Baker University professor Will Duncan to help execute his restaurant plans.

“We figured out how the money would work, we put together a market analysis and we came up with the idea of adding breakfast to the menu,” he said. “People are always going to iHop and McDonald’s in Lawrence, and it’s safer for students to have an option in town.”

After the plan was made, they reached out to Lori Gardner, owner of Homestead Bakery, to ask if they could use the building in the evening.

“My first reaction was no way,” Gardner said. “I just envisioned a big party in my sweet store.”

Gardner said her reaction changed completely after sitting down and talking with Kort.

“His professional preparation to our first meeting turned my thinking around,” she said. “He had well thought out answers to all my questions. He had a solid plan and a lot of enthusiasm that was hard to resist.”

The respect that Kort and Duncan have shown Gardner has meant a lot to her.

“We all want this to work,” she said, “and they are going above and beyond to work towards success in this collaborative venture.”

A big goal for Homestead Bakery, as an established member of the community, is to help the community grow and to build relationships with new people and Baker students.

“Our very diverse demographic includes college students, and I feel this is a great way to not only reach out to them as potential Homestead customers, but to help make their short time living in Baldwin City to be enjoyable and delicious,” she said.

The partnership with Late Nite has not only benefited Kort, but also Homestead.

“I want my business to reflect my core values, and investing in people, believing in them and helping them reach their goals, is definitely doing that,” she said.

“The idea is no food should take longer than five minutes to come out of the kitchen,” he said.

Some items on the menu include bacon, eggs, sausage, waffles, French toast sticks and pancakes.

“There will also be a cereal bar where people can get unlimited bowls of cereal,” he said.

While Late Nite is providing all their own supplies and food, they will also be contracting with Homestead for a few special items.

“If people want Homestead cookies, cinnamon rolls, or ice cream, we will be able to sell that as well,” he said.
“We think it would be great if we could begin to franchise it and bring Late Nite to other areas.”
Kort said many of the ideas and aid he has received has come from co-owner and Zeta Chi house dad Will Duncan.

“I have been responsible for all of the back-end of things,” Duncan said. “I have completed the payrolls, federal documents and set up bank accounts.”

Items that are shared between the two businesses, such as the soda fountain, have been outlined and put into a contract that Duncan created.

“We had to learn how quickly they go through a case of soda, and how much we will help pay for shared items like those,” he said.

Duncan said while they want to do some exciting activities at Late Nite, it will also be a calm place where students can study and meet with study groups.

“We really want a place where students can get something to eat, but also stay there and hang out,” he said. “I think having a place where that engagement can happen will be a really lovely experience.”

In the future, Late Nite hopes to expand to other small towns in need of late-night style restaurants.

“There are all of these towns, in Kansas and in other states, that have small colleges like Baker,” he said. “We think it would be great if we could begin to franchise it and bring Late Nite to other areas.”

Late Nite strives to provide a “new day” energy for its customers.

“We want to provide a really happy experience for everyone who comes in,” he said. “This should be a little place where people can de-stress and feel a sense of comfort.”