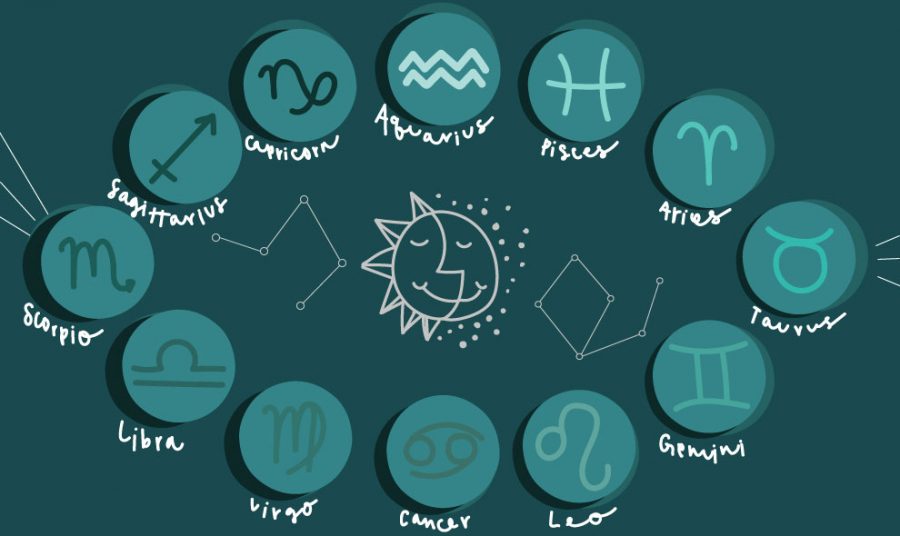 Story by Will Hanson and Megan Stover

Astrology plays an important role in many lives, as it often allows people to justify their actions and traits of themselves and those around them. Astrology has risen in popularity quite recently, with the internet allowing quick access for those interested in learning more about what it means to be their respective signs.

“All of those things fit me pretty well. I don’t think there was something that made me say ‘heck no, that’s not me.’ I don’t believe in it, I think a lot of it is taking things of the most people can describe themselves and putting it into text.”

“I think it’s cool. And how so many traits of each zodiac can be seen in people. I think the traits represent me. I am so strong headed it isn’t funny. I see myself as the exact description of a Taurus.”

Another factor is that Millennials and Generation Z have grown up online, leading to a larger consumption of all type of information. Viral memes and social media accounts dedicated to horoscopes and zodiac signs have also attributed to how astrology has become heavily discussed.

“All the strengths fit different parts of my personality and lifestyle. Nervous for sure, I’m pretty consistent and sometimes I am very indecisive. I like music and books, I don’t like small-talk. I love repetition and routine. I think for the most part I have the characteristics of a Gemini.”

Some popular astrology-themed twitter accounts are @AstrologyVibez and @poetastrologers. The latter has 595.8 thousand followers, where their tweets mostly consist of zodiac themed jokes and memes. Besides social media, many applications such as “Co-Star Astrology,” have had a hand in evolving astrology into the digital age.

“I think that the traits are me 100 percent. I’m sympathetic and I love eating. I think that being a Cancer fits me pretty well.”

According to the New York Times, the boom of astrology is due to it “providing an easy framework for endlessly personalized material, targets women and accesses ‘90s nostalgia.” With the increased popularity and dependence on astrology, many are skeptical that there is truth behind zodiac traits.

“I don’t feel too strongly about mine, but they are fun to look at and think about. I feel like my sign represents some elements of my personality, but it does not entirely represent all of the small tidbits about it.”

Junior Grant Roesner does not spend his time worrying about astrology or learning about the traits that supposedly describe him as an Aries. Although he agrees that his traits mostly fit his personality, Roesner said, “I could find someone who is an Aries but who is nothing like me.”

“I am organized in things that I care about, so if I don’t care it’s hard for me to stay organized. I am very anxious and worry a lot; I’m overly critical of myself. If I see that a Virgo likes a certain thing, I may go out and try it to see if maybe I’ll like it as well.”

There are some people who disagree with the validity of astrology but believe that there is little harm in learning about it. Junior Bri Bodine believes that there is substance behind astrology and zodiac signs. Although Bodine believes in the fact that she shares the common Virgo traits, she does not take her traits into how she lives her everyday life.

“I’ll read my horoscope if it pops up somewhere, but I’m not sure I believe it all. I think some of the things zodiac signs or horoscopes say are overgeneralized so anybody can relate to them. I don’t know too much about my sign, but what I’ve read does match pretty well with my personality traits.”

“People like having guidance and following astrology can help,” said Bodine. “People should not use their zodiac signs to validate their behavior as they are often taken too seriously in dictating decisions.” Bodine thinks that reading horoscopes and zodiac traits are fun, but that those reading them should not allow them to be labeled.

“Everyone is still their own person; if everyone was exactly like their zodiac signs, then we would all be the same. We were not designed to be the same person,” Bodine said. Bodine shared some of the positive traits of a Virgo but doesn’t feel they all represent her.

“I feel like I fit that for the most part. I like to think that I am pretty generous and have a good sense of humor. I do think for the most part, it fits me. I think it’s crazy how some of those traits are spot on. I think there are some factors that connect people with their signs.”

“I am extremely loyal, and I take that very seriously in all relationships,” she said. “But, I don’t think I am analytical at all, as I usually base my actions off of my feelings.” Being critical and anxious are also typical traits. “I am very anxious and worry a lot and overly critical of myself,” she said. “I am my biggest critic.”

While Bodine said she doesn’t believe in horoscopes, she does think women tend to take astrology more seriously than men.”I do believe in zodiac signs and how they influence their behavior,” she said.

Junior Jesse Bentz, said zodiac signs are an interesting way to potentially learn more about yourself.

“Zodiac signs don’t necessarily ‘guide’ me through my life, however it’s interesting to see the parallels between my sign and me. The majority of the traits do align with me, yes.”

Bentz thinks the strengths and weaknesses of a Capricorn align with his personality for the most part.

“Some traits are learning from my mistakes, self control, as well as liking family and music,” he said. “The weaknesses are definitely stubborn and always expecting the worst.”

“Personally, I don’t really ‘believe’ in zodiac sign horoscopes. But I think occasionally it’s fun and interesting to look at my horoscope and play around with it. The traits of my sign definitely represent me. I’m not very outgoing but I love to be around my friends and I love helping people.”

“All the strengths fit different parts of my personality and lifestyle,” he said. “I am nervous for sure, I’m pretty consistent, and sometimes I am very indecisive.”

Davies is a Gemini, and while he said he doesn’t fully see the appeal of zodiac signs, he does see some similarities between his personality and the traits of his sign.

“I think I fit most of the traits. I think that they’re accurate in characteristics but they don’t affect behavior. I think people are fascinated with it because it gives a reason behind someone’s traits, like taking an enneagram test.”

“I think for the most part I have the characteristics of a Gemini,” Davies said. “If everyone was exactly like their zodiac signs, then we would all be the same.”