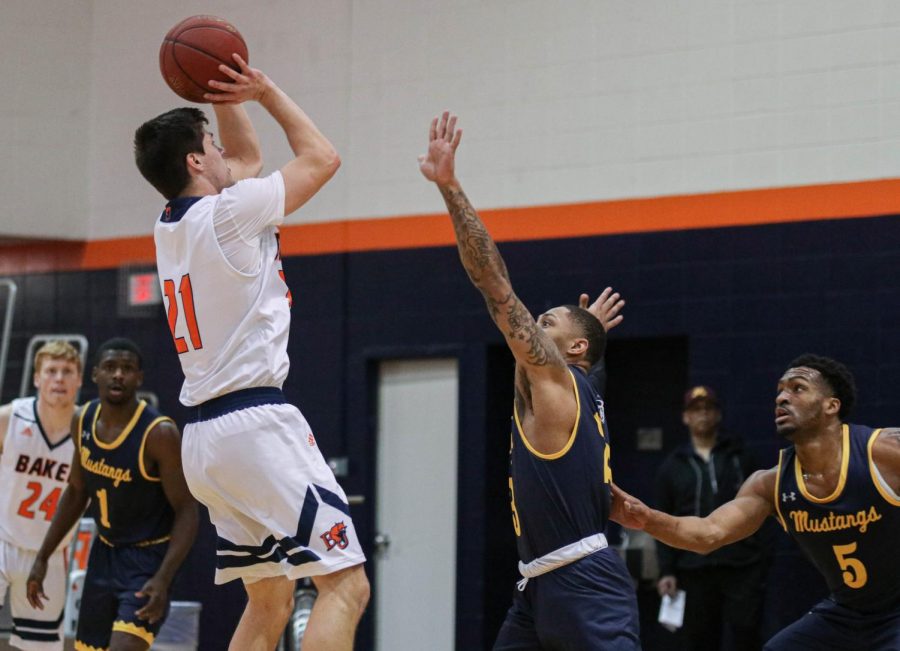 Senior Brandon Clifford lead the Wildcats in their win against Mount Mercy 85-80. Clifford had 21 points on the day as Baker's top scorer.

The Baker Wildcats basketball teams hosted the Missouri Valley Vikings at home in the Collins Center on Feb. 19. With both men and women coming off wins against Mount Mercy, both games provided an intriguing challenge as the Heart of America Tournament draws near. The women began their game at 5:30 p.m., and the men followed with their own tip off at 7:30 p.m.

The Lady Wildcats started off the night by winning a game in which they only won one of the quarters they played. However, the Wildcats incredible third quarter effort would be all they needed as they erased a 12-point halftime deficit. In the third quarter the Wildcats outscored the Vikings 34-6 giving them a 16-point lead going into the final quarter. Leading the way for the Cats was Brooke Habeck who scored 13 of her game leading 19 points in the third quarter with junior Abby Bird chipping in with nine points as well.

The Vikings would use a late push to narrow the deficit down to two points with just over a minute to play. In the end though, Habeck would sink a big bucket late and Leah Vanweelden would go 3-4 from the stripe to ice the game, giving the Wildcats a 67-60 win.

Next up were the men and they managed to grind out a win in a game that came down to the very last possession. In an animated first half, Vikings guard, Darrell Watson, taunted the Baker student section after Missouri Valley got out to a quick 10-0 lead to set the stage for a memorable game. However, the Wildcats found themselves up at halftime as senior Brandon Clifford knocked down a late three to give Baker a 36-33 halftime lead.

The second half would not disappoint either, as both freshman Xavier Elam and sophomore Jalen Patterson would lead the charge for the Wildcats while both chipping in a team leading 21 points along the way. But, Missouri Valley would not go away as Vikings guard Alonzo Williams converted a late three-point play to bring the Baker lead down to one, and after Clifford missed the front end of the one and one the game came down to one last inbounds play. It would be Charles Fisher that would make the big play for the Cats as he tipped away the inside pass and the Baker men walked out of Collins Center as 77-76 victors.