Theatre performs “Jack and Jill”: A modern take on romance 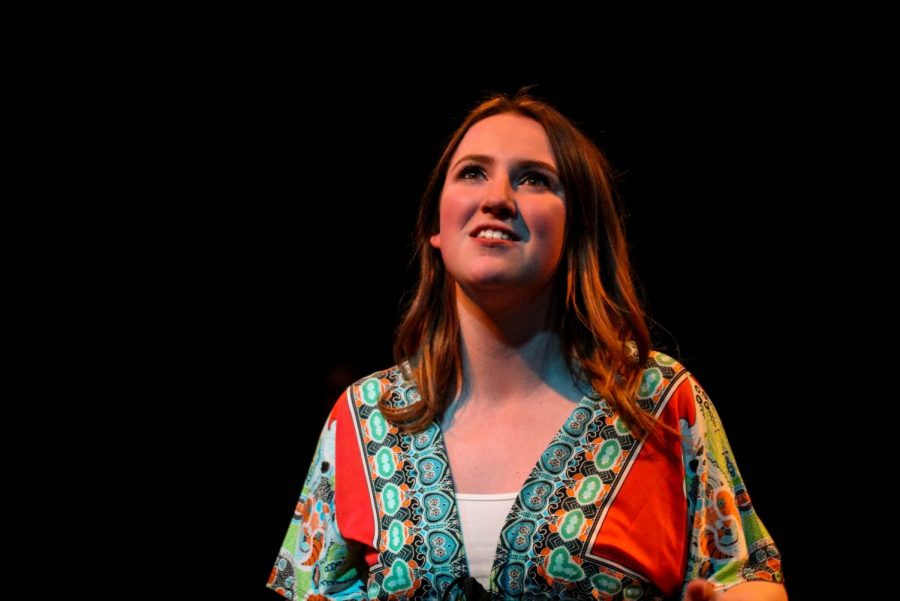 Senior Erynne Jamison stars as Jill. Rather than performing the production in Rice Auditorium, it will run in Darby Hope Theatre.

“Jack and Jill” is a play written by Jane Martin and it first premiered in 1996. The production is known for its unique and contemporary take on romance and relationships, while also having a principal cast of only two.

The play follows the tumultuous journey of two people in a relationship over the span of five years.

Assistant Professor of Theatre Emily Kasprzak, chose “Jack and Jill” after doing scene work on it during her undergrad. “It’s a real honest look at what a real romantic relationship is, and I found that really compelling,” Kasprzak said.

“It really examines how you can remain an individual while in a couple and how you can find that balance between what you want as a person or what you both want as a couple,” Kasprzak said.

While serving as director, Kasprzak also serves as the costume designer for “Jack and Jill.” Kasprzak took the role as she had a specific idea in her head of how she wanted the characters to look. Over the course of the play, each character wears 12 costumes each, 24 in total.

As many of the costume changes happen quick or on stage, Kasprzak has to make sure that the costumes are easy to take on and off.

Following the July 2019 remodel of the Darby Hope Theatre, the theatre department decided to choose a play that would fit the space. Kasprzak choose “Jack and Jill,” because its intimate nature would play well.

Rather than performing in the usual Rice Auditorium, the performers will be surrounded by the audience on all four sides of their stage.

Jamison’s favorite part about playing Jill is the immense amount of characterization she has to express in her acting. Along with a major amount of stage time, there are large amounts of dialogue, with 700 lines of dialogue over the course of the play.

An aspect that was interesting for Jamison, was the intimate nature of the play. “I have done a level of intimacy before, but nothing like this. It has been interesting to warm yourself up to physical touch and sexual references,” Jamison said.

Having the audience on all sides was also a new experience for Jamison. “It has to be the way it is, because the show is so intimate that it makes sense to have the audience feel like they’re in it,” Jamison said.

Jamison found the role of Jill challenging as it pushed her acting abilities. Jamison pulled from her past experiences in order to give Jill as much characterization as she could.

Jamison loves working with Kasprzak, as she loves her ability to be equally fun and serious about how she directs and interacts with her performers.

“She is really good at driving the kind of directing of asking the actors to think about their character and their actions,” Jamison said.

Sophomore Kenzie Kuhlmann serves as the understudy for Jill. With two separate casts and two guaranteed performances, Kuhlmann and her partner, senior Adam Preston, rehearsed separately from Jamison and Flores.

Kuhlmann describes them as “two entirely different shows. Each of us has our own interpretation of their journey and it shows between the two versions of the show.”

Kuhlmann and Preston will perform their two guaranteed shows on Feb. 29 and Mar. 6.

Kasprzak believes that students should see the play as it “explores different forms that love and a relationship can have. Not every relationship is perfect, and it [“Jack and Jill”] does not look at it through rose-tinted glasses,” Kasprzak said.

Kasprzak and crew recommend that audiences reserve tickets prior to seeing the production, as Darby Hope Theatre has a maximum audience occupancy of 40.

“Jack and Jill” is rated “R” due to mature themes and language. It is not intended for young audiences.