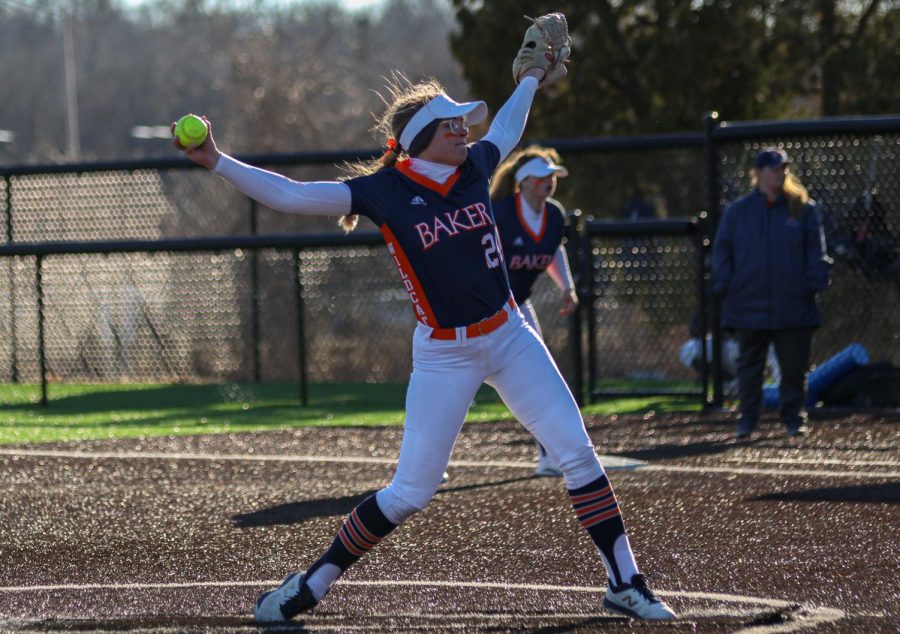 With a perfect record of 8-0, the Baker softball team has begun their 2020 season with a bang. Right off the bat, they swept Park University in a double header on Feb. 18, making their initial record 2-0. Last weekend, the Wildcats earned a 4-0 win in two double headers, beating both Midland University and the University of St. Mary.

“Once we started getting that real sense of competition, we actually did really well. We all trusted the process and put our faith in what we already knew,” senior Riley Swickard said.

Having to deal with a plethora of cancellations because of bad weather has forced the team to adjust. They have not been able to practice on their home field yet, so they have reverted to practicing inside. Practicing inside has not been ideal considering the team is preparing for their first home game, but the players have kept a positive mindset.

“It has made us more anxious to play games. We are more excited to get at it,” sophomore Zoë Brewer said.

Sophomore Makayla Akin earned the Heart of America Pitcher of the Week. During the week, Akin pitched a total of 16.2 innings, collecting three wins and posting an earned run average (ERA) of 0.84. She dedicated her personal success to the effort of her team.

“I was honored to get the award, but it was really a team award because I could not have done it without the great defense behind me,” Akin said.

According to Akin, her team values focusing on the small aspects in order to perfect the season as a whole.

“We have great team chemistry and hold each other accountable,” Akin said. “We show up ready to go for practice controlling the two things we know we can control, which are attitude and effort while also pushing ourselves and each other during practice.”

Having to overcome cancellations and setbacks has sparked a fire that the team has used to its advantage. “As a team we are just excited to be playing games. Being in a spring sport we have to deal with the weather, and we have dealt with scheduling changes because of that, but we have been working hard since the fall. We are just excited to see all of that pay off this season,” Akin said.

The Wildcat softball team will be back in action on March 6 to 8, when they travel to Gulf Shores, Ala. where they will compete in the Gulf Shores Tournament. The teams they will face are to be determined.