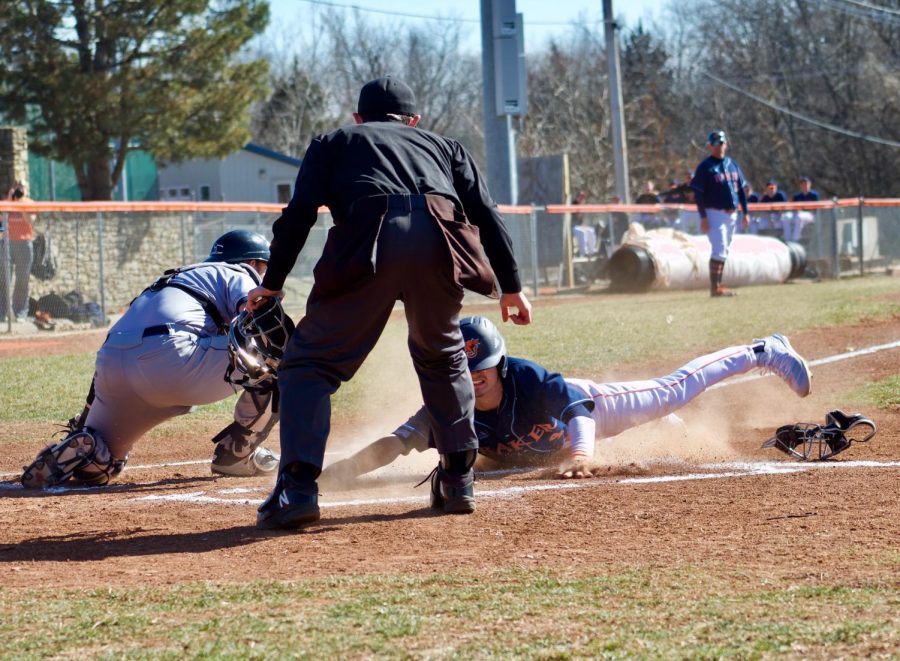 Senior Bailey Pattin sliding into home plate to score at Baker's double header against Concordia. Baker falls to Concordia 8-11 in game one and 3-14 in game two.

The Baker baseball team lost both games in the non-conference doubleheader against the Concordia University Bulldogs. The Wildcats are now 5-14 overall and 0-4 in the Heart of America Athletic Conference.

Game one was a back and forth contest that saw the game go into extra innings. Concordia had an early 3-2 lead after two innings before scoring five runs in the third.

In the fifth inning, the Wildcats took advantage of wild Bulldogs pitching that saw the visitors plunk four batters and commit a balk. allowing the Baker to tie the game up at eight. However,  Concordia emerged victorious in the end as a three run eighth inning sealed the game at 11-8 in favor of the visitors.

The second game was not as close. The Bulldogs rushed out to a 6-0 lead after one inning when Baker starter Austin Hurd sat down the first two batters of the game. The Wildcats managed to scrape a run back in the second inning but both pitching staff held firm until the fifth inning.

The fifth inning saw a throwing error committed by the Wildcats that led to two more runs and an RBI double that grew Concordia’s lead to 10-1. Baker showed some fight, getting back two more runs in the bottom half of the fifth, but in the end, Concordia won with a final score of 14-3.

Next up the Wildcats will travel to Oskaloosa, IA to take on the William Penn Statesmen, the first meeting of the year between these Heart of America Conference rivals.