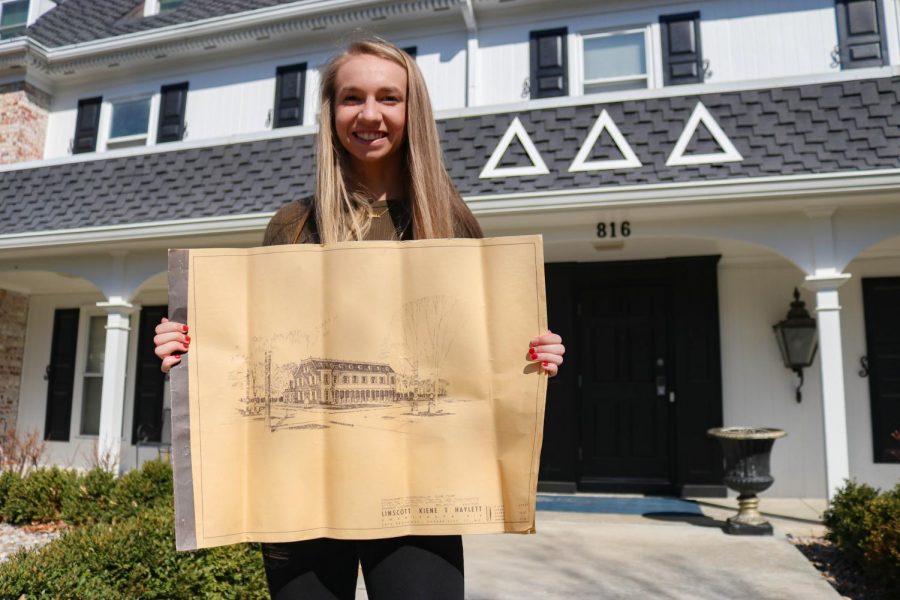 Junior Kaylee Smith, current president of the Baker University Delta Delta Delta sorority, holds up the original blueprints for the house. The blueprints were uncovered recently and are a memorable historical find for the members of the house.

The Baker University archives hold the extensive history of Baker, the first university founded in the state of Kansas in 1858. This includes information from each historic building to the Greek houses found on campus. The sorority Delta Delta Delta located on 816 Fremont St. recently received the original blueprints to the current house, built in 1964.

Tri Delta is one of seven houses, but the only one with original blueprints available. The blueprints have been unknown for many years as they were being held by a former Baldwin Archives treasurer. It was not until 25 years ago that Phyllis Braun, who works at the Baldwin City Library and is a former Tri Delta president, was finally given the blueprints. The documents are now being held in the Alumni Center with Grant Coordinator Emma Carter.

“I forgot about them and when searching for something else I found them in the back of my desk drawer,” Braun said.

After recovering the blueprints 25 years later, Braun immediately brought them to the attention of Tri Delta and the Baker archives.

The papers, which are sitting on a shelf in Carter’s office, are accessible for anyone to view. Along with the hand-drawn outline and detailed information, these blueprints bring the struggle of women’s rights during this time period. Women had little rights without men, which Carter mentions specifically when talking about the history of the blueprints.

“At the time, the women could not walk into a bank and ask for a loan.” Carter said. “So they had to fundraise, they had to have male co-signers, they had to figure out a way to raise money for a new house that was for women and promote education for women without the rights that were awarded to other people, specifically men.”

Fraternity and sorority life has been a part of Baker’s culture for a long time. Before there was fraternities and sororities, there were literary societies. These groups, which were separated by gender, began at the same time Baker was opened in 1858.

“Everyone on campus belonged to one of those so they were almost a precursor to Greek life. But then Greek life came along and we no longer have these societies,” the University Archivist Sara DeCaro said.

These new fraternities and sororities quickly populated the campus, with eight organizations establishing chapters. The Tri Delta house was built in 1895, Sigma Phi Epsilon in 1901, Kappa Sigma in 1903, Delta Tau Delta in 1903, Zeta Chi in 1905, Alpha Chi Omega in 1908, Zeta Tau Alpha in 1912 and finally Zeta Phi Beta was installed in 2006.

Through the years, Tri Delta has seen changes in members and in its physical appearance. The values and sisterhood that Tri Delta has developed is what will last a lifetime.

“We have three words that we go by,” sophomore Academic Development Chair Hanna Stevens said, “brave, bold and kind.”

“So we have those words all over our house and it means to us that you should uphold yourself in a certain way; be nice to anyone no matter what. I also like bold, I think it is very empowering” Stevens said.

Continuing the love and empowerment is what truly matters to the ladies at Tri Delta suggests sophomore Vice President of Public Relations Maggie Young.

”Our motto is ‘let us steadfastly love one another’ so I would say a huge part of that is love and obviously sisterhood because it is important to all of us to have that community where we can make life-long friends” Young said. “You see how these friendships and the love just continues for decades.”

These blueprints represent the struggle and triumph Tri Delta has experienced throughout the past 125 years it has been a part of Baker’s fraternity and sorority life. Not only does it reflect Tri Delta’s history, it also reflects the history of all the fraternities and sororities on campus.