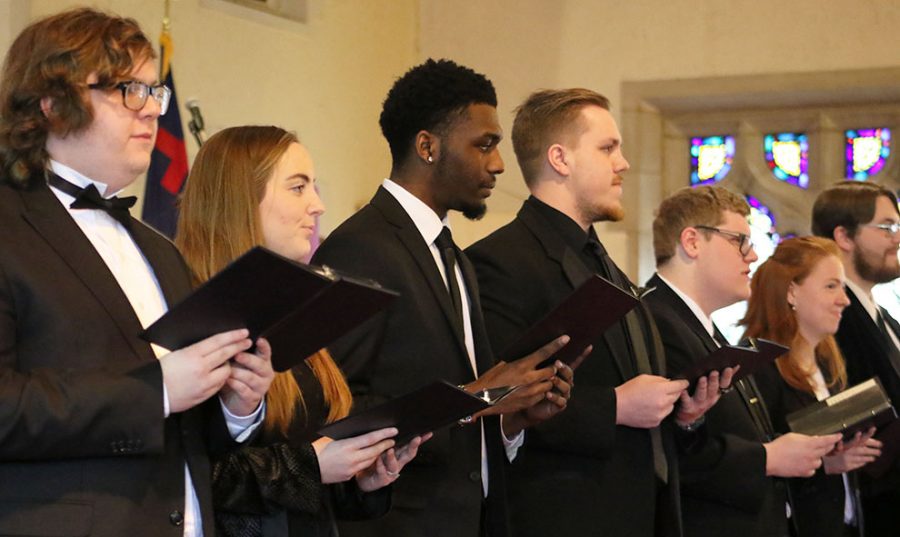 COVID-19 has lead to many student lead organizations to operate solely online and resume in-person meetings in the fall semester. For Baker University speech choir, this change is bittersweet. 16 years of performances both inside and outside the classroom, speech choir will now have to conduct their final meeting completely online.

Susan Emel, professor of communication studies and the creator of speech choir, remarked the change to an online only format will make the final semester of speech choir memorable.

For those not familiar with speech choir, the organization prides itself in being a unique and original group that helps students improve in their public speaking skills. The group is known for traveling to elementary schools, banquets, and other events performing spoken pieces that the students have compiled.

“It is not forensics, it is not reader’s theatre, it is not choral reading. But it is some of all of that. Above all else it is a chance for students to be in front of real audiences for real events, not classroom laboratory kinds of things,” Emel said.

Since the organization is something unique to Baker University, Emel had to create what speech choir and what the group would do from scratch.

“I was on sabbatical,” Emel said. “One of my goals for that sabbatical was to talk to Fred Craddock who was a renowned Professor of Preaching from Candler School of Theology and has been named as one of the 12 best preachers in America by Newsweek magazine.”

Emel had met Craddock from a previous event and wanted to discuss with him further.

“I went to interview him. He threw out this idea of a speech choir and he kind of descried what it would do,” Emel said.

Craddock envisioned a group that could read scripture in chapel services to help the crowd and the students understand it better, but the group eventually expanded when Emel decided they could model things after forensics events and add more students to the group.

“Baker is the only place that we that has had something like this…. Apparently in the Philippines speech choirs are a very big thing but they are not what we do,” said Emel, “Other than that we have never really found anything else and so it has been fun to be a little unique.”

It is because of this uniqueness that one member of speech choir is ensuring that the organization will continue to be remembered on campus long after its end in May.

Junior Zac DeGreeff noticed that the Baker University Archives were lacking in information about speech choir.  He wanted to make sure the organization’s history was preserved for future baker students and approached Emel and Sara DeCaro, the university archivist, about beginning to add speech choir into the university’s collections.

“We have been filing scripts, video and audio recordings,” DeGreeff said. “It is really exciting because participating in speech choir these past three years has impacted me so much and I feel like I am giving something back by helping to preserve it.”

Though speech choir is coming to an end, DeGreeff is still dedicated to finishing archiving until all of the scripts from past performances and other materials are cataloged.

“I have grown so much as a presenter and speaker over the last three years thanks to Speech Choir,” Drabik said.

But for many speech choir members, the switch to online classes for the semester has changed the way they will have to say goodbye to the organization.

Typically, the end of the semester meant that speech choir would host a party which celebrated graduating members or those moving on to nursing school. The festivities will still happen, but in the virtual meeting rooms of Zoom rather than a classroom.

“This year all of us are “graduating” from speech choir and so I was looking forward to a celebration with the current students,” Emel said. “We will meet online, various students and instructors are bringing games to play with the whole group, and we will have a chance to visit one last time together as a class.”

Drabik welcomes the chance to connect with her fellow speech choir members in any capacity.

“I am glad and proud of us for finding a way to stay connected and celebrate [our] accomplishments,” Drabik said.

The accomplishments speech choir are believed to come from the group’s dedication to improving every member’s public speaking skills. For Emel, the chance for students to improve on these skills has been one of the best outcomes of the organization.

One of her favorite success stories was a student who joined speech choir after being forced to. Emel recalled that she was very shy but by the end of that student’s senior year, they had delivered the class address at graduation.

Students are still honing their skills thanks to having meetings using Zoom. Each member of speech choir is required to present to the group once a semester. The student then receives constructive criticism on their performance, which Emel believes is a crucial component to improving speaking skills.

” I actually think this constructive feedback practice is one of the most important and durable skills Speech Choir offers students” Emel said.

Emel estimated that speech choir has done no less than ten performances every semester since its creation.

Emel recalled that the Quest program introduction was particularly fun because they modeled their performance off “Extreme Makeover Home Edition” and instead called it “Extreme Makeover General Education edition.”

For sophomore Kelsey Dame it is hard to choose a favorite event.

“I have loved almost all of them for different reasons,” Dame said.

Dame joined speech choir after meeting Emel at orientation and was asked if she participated in debate or forensics in high school.

“She told me about speech choir and I knew it was going to be a lot of fun,” Dame said.

One of things Dame likes most about speech choir is the opportunity to travel and meet people.

“I have been to a lot of neighboring communities and have met some really amazing people,” Dame said. “Even performing at Baker is fin because you have a friend in the audience who is always there to cheer you on.”

A lot of work and time goes into planning an event for speech choir.

Before a semester begins, the speech choir already has events planned to perform at. They will then go to the library and research all the topics they have been asked to perform and find newspaper articles, poetry, plays.

Speech choir will look for anything that has visual imagery will be considered. Then Emel and Russell Taylor, assistant director for speech choir, will look for a particularly strong piece to build the performance around.

They then would break that piece up and place smaller pieces in between. Then the script would be handed to the students and that is when they would begin blocking and practicing for their performance.

For Emel, the most memorable performance was a memorial for the wife of Charles Kopke, a major donor to the university, at the request of Pat Long, the president of Baker University at the time.

“We read her obituary and we added some poetry that was appropriate to her interests. One of the things the obituary mentioned was all the charities that she supported and one of them had a project that was to give teddy bears to children,” Emel said.

The students brought up the idea of bringing bears and Emel states that they all went out and purchased their own for the memorial.

During the performance Emel recalled that students would walk around speaking and they would put their bear in a basket in front of the whole group and a member later took the basket to the shelter.

“It was very touching,” Emel said.

While speech choir has done a lot of good for the community, Emel has stated that the administrative tasks of maintain the group are a lot and she decided to end things as there is no one else who could take her place of planning the group’s schedule.

Drabik is sad to see the organization go.

“Every single Wednesday night since I came to Baker has been spent in Mabee 100 with my speech choir family,” Drabik said. “We have so much fun in class and while this class is the only time I see some of the people, we are a close group and can count on each other each week. I’m not sure what I’m going to do with myself next year when we don’t have class.”

Dame agreed and said that the organization has helped her grow as a person especially during an event where she led the group.

“It was really fun to do and it helped my leadership skills grow,” Dame said.

But while speech choir will be having there last  meeting ever online, Drabik believes that these circumstances has made the group closer as they prepare to say goodbye.

“We are still working with each other to grow as speakers…and we are still checking on each other. I think that’s what I am most proud of. In the midst of this pandemic and the rapidly approaching end of speech choir, we are still a family and [we are] making sure we are all okay. It is all very bittersweet,” Drabik said.

Speech choir had what became their last performance during a Chapel service on March 12. The group had performances scheduled in April, but these were cancelled due to the spread of COVID-19.

“We were so lucky to get to have our last Chapel service before all the quarantining began! But it was literally about one hour before the pandemic implications began to hit Baker. We had a party that night as well, but several Speech Choir members wrote to tell me they were not comfortable attending due to the threat of the virus,” Emel said.