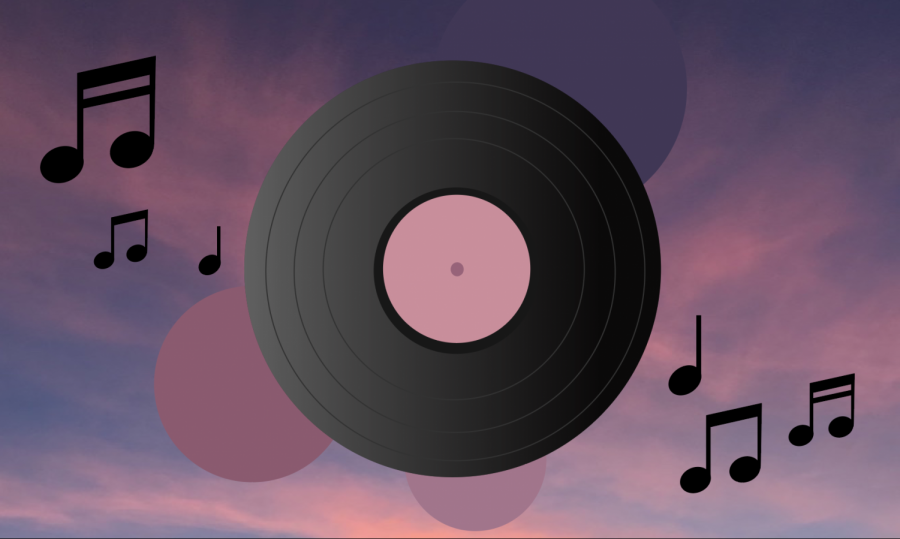 Story by Will Hanson and Jamie Pellikaan

Standout Song: “A Poem on the Underground Wall”

Serving as the third studio album for the folk duo, “Parsley, Sage, Rosemary, and Thyme” is one of those rare albums where every song has its own set of strengths and one does not overshadow the others. This is in part because no one song is like the other as each differs vastly from the other. In addition to the variety of songs, the style of music used for each one does not follow a set routine of only featuring an acoustic guitar as most people associate with the folk genre. This album is where the harmonizing vocals and poetic lyrics of Simon and Garfunkel really shine.

Standout Song: “The Battle of Evermore”

One of the best-selling albums of the 70s, the fourth album made by rock group Led Zeppelin became their most popular due to mega-hits like “Stairway to Heaven.” The album is often hallmarked as being a turning-point for the metal genre by critics and the guitar work alone certainly supports this claim. The album’s lyrics were heavily influenced by the writings of J.R.R. Tolkien as the songs “The Battle of Evermore” and “Misty Mountain Hop” being directly influenced by “The Lord of the Rings.” These fantasy elements make it another great album to get fully immersed in.

With any classic rock powerhouse there is always an album that goes unappreciated by most fans. “Queen II” is that album for Queen what the album title lacks in creativity the songs more than make up for it. Heavily influenced by the fantasy genre the album is split into two sides “The White Side” and “The Black Side” to symbolize the dichotomy between the lighter music and the heavy metal the album has. Truly a forgotten gem of Queen’s discography, “Queen II” will transport you to another realm just with Freddie Mercury’s melodious voice.

One of the last true progressive rock albums, “Hemispheres,” is considered Rush’s last foray into creating a concept album, or album featuring songs that all deal with a specific theme. Known for the elaborate and show stopping instrumentals, this album does not disappoint as Rush’s talent is seen in every guitar solo, drum breakout, and bass line. The lyrics are witty, thought-provoking, and weave an incredible story that will transport the listener.

While written in the 1980s, Electric Light Orchestra’s “Time” album is highly applicable to today’s social landscape. The whole album was written in the perspective of someone who was taken from modern day and placed in the 2090s and deals heavily with technology and how it has shaped every facet of the human experience. At times, the album can seem like inspiration for a “Black Mirror” episode. The unique instrumentals and electronic music of the album make it an easy listen.

As the group’s debut album, “RUN-DMC” surpassed the expectations of what a hip-hop album could be at the time. The album is revolutionary in the sense that instead of focusing on having a good time, it deals with societal issues. Moreover, the album brought a change to the sound and tone of the hip-hop genre and is credited to have pioneered the new school hip-hop movement. The album features many songs considered to be the first of their kind, like that first rap-rock, and it is a must for any fan of hip-hop.

John Legend’s debut album, “Get Lifted” is an exceptional piece of music history. Legend’s gorgeous songs and beautiful themes make it a great album to listen to. “Get Lifted” does a great job at showing how much Legend has grown as a musician over the years. Legend’s first album still remains as one of Legend’s strongest. It is emotional and raw, serving as a great starting point for those who wish to introduce themselves to Legend’s music.

Standout Song: “Back to Black”

Amy Winehouse’s “Back to Black” is a deeply personal album with a great combination of R&B and Soul genres. Winehouse does a great job at encapsulating heartbreak through a mix of ballads, hip-hop and music from the 60s. You can feel the Winehouse’s heartbreak and emotion with each track, sometimes making the album feel too personal at times. Winehouse’s voice and songs feel almost timeless, mixing musical elements from various decades.

This Nicki Minaj record embraces the color pink pop music and Marilyn Monroe while also incorporating Hip-Hop and Rap. Each song serves as a fun way of self-expression, perfect for fans of pop music and rap music. With 22 tracks, the album has a nearly two hour listen time, and with each song distinct from the last, it makes for a rather jovial and fun two hours.

Artist: Panic! At the Disco

Standout Song: “This is Gospel”

Panic! At the Disco is the perfect band to listen to if you like pop, alternative, folk and rock music. Brendon Urie, the lead singer and songwriter properly incorporates the sounds of pop and alternative rock all into the same album and the same songs. Urie’s fantastic voice and the original songs are enough to at least warrant a full listen on the album.

Zara Larsson’s angelic voice and upbeat tracks make “So Good” a good time. With very catchy tunes, each with its own meaning to Larsson, the record feels personal. Larsson experiments with different genres, by meshing things up and creating a new sound for herself.

The fifth album from Grimes, “Miss Anthropocene” embraces the darker side of electronic music through a record she created in response to the death of her friend. Grimes experiments, meshing genres and emotions together to create an album that evokes emotion in the listener. Grimes’ emits her emotions perfectly into each track on the album.