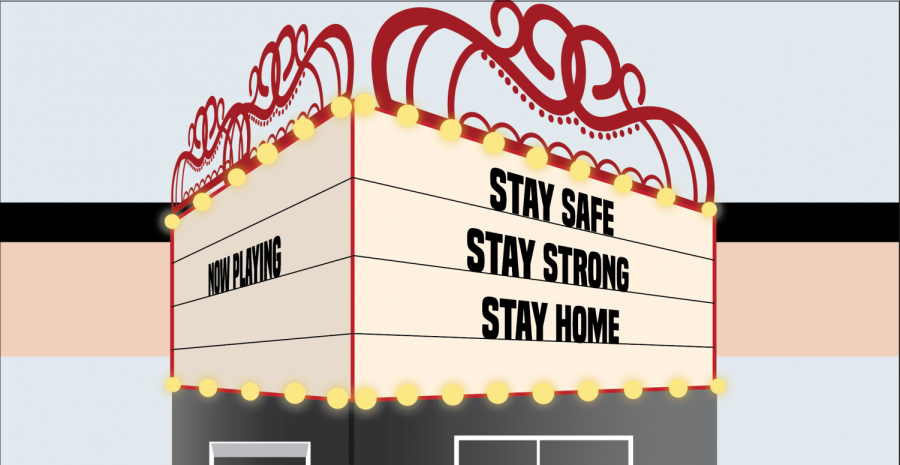 The COVID-19 pandemic has forced countries across the globe to undergo preventative measures to halt further spread of the coronavirus and social distancing has been one of the most drastic. From staying six feet apart from each other, limited gatherings and now the recent ban on nonessential outings, businesses across the country are experiencing loss.

Among these includes the film industry, which now faces one of the largest challenges in entertainment history.

As early as March 15, large movie theater chains such as AMC Theaters began to close their doors in response to the spread of the coronavirus and its effect on the box office. The weekend of March 14 was the lowest grossing weekend in 20 years with revenue totaling to $55.3 million. Even the most recent Disney movie, “Onward,” experienced a large drop of 76% in revenue in its second weekend, with “The Good Dinosaur” coming in second with a 59% drop.

Since President Trump has extended the social-distancing guidelines to the end of April, recently released movies and those scheduled to hit the theaters within the next few weeks have been forced to reconsider their plans. With no theaters to release their latest movies, different film companies have been forced to find solutions until further notice.

One of these solutions has been to delay upcoming movies. Several major movies have had their release dates delayed by months, some up to a year. Among these include “A Quiet Place Part II,” which was set to be released on March 20 in the United States, has now been delayed to Sept. 4. But movies such as “F9,” the next Fast and Furious movie, have been pushed back an entire year.

Other films that were in production have halted altogether and are stuck in an indefinite production. A traditional movie set requires a large staff consisting of both crew members and actors. But because gatherings have been limited to 10 people, filming has become a greater challenge, if not impossible. Variety reports that several studios are projecting that filming will be unable to continue until, under ideal circumstances, the middle of May.

But while some movies are postponed until they can be released into traditional theaters, studios have seen this as an opportunity to test-run a new platform: streaming services.

Some studios, such as Disney and Universal Studios, have taken the opportunity to release recent titles months before their scheduled DVD releases on iTunes, Amazon and Disney+. These titles include “Birds of Prey,” “The Hunt,” “The Invisible Man” and even “Onward” while they would still be in their theatrical run.

But other movies are scheduled to be available for rental before appearing in the theaters. Such is the case of “Trolls World Tour,” the sequel to the 2016 movie Trolls, which was announced that it would be available for rental on April 10 for $20. Without a theatrical release, its revenue will be dependent on digital downloads.

The success of the digital release of “Trolls World Tour,” or the lack of it, is speculated to help set a precedent for the film industry once the quarantine is lifted. In an article published by The Verge, it’s speculated that other movies may have shorter theater releases or be pushed for digital downloads instead.