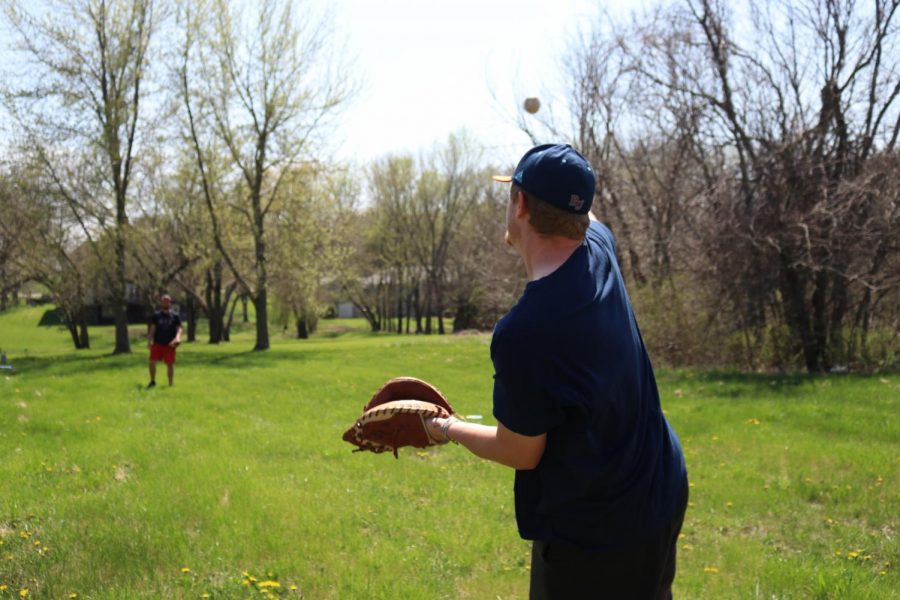 Baker University Baseball players, senior Martin Radosevic (left) and junior Donovan Sutti (right) play catch in their free time despite the impact that COVID-19 has had on their season.

Much of a Baker student-athlete’s time outside of class is dedicated to sport-related activities. Teammates spend time together and form close relationships with not only those within their sport, but the entire athletic department. Having such a big part of their lives unexpectedly taken away would prove to be unsettling for many.

With rising health concerns due to the coronavirus, schools were forced to close for the remainder of the academic year, which included the cancellation of all activities. On Mar. 16, the National Association of Intercollegiate Athletics (NAIA) released a statement announcing its decision to cancel the remainder of the Spring 2020 athletic season effective immediately. Shortly after, students were informed of the university’s campus closure in an email from President Dr. Lynne Murray on Mar. 20.

Student-athletes were devastated when they found out their spring seasons were going to be ending. Baker sports including bowling, dance, track and field, softball and baseball were all directly affected as they were either just beginning their seasons or preparing to compete in championships when the news hit.

The Baker dance team had only been in Davenport, Iowa for a short time when they found out they would be returning home. The team was attending the 2020 NAIA National Championships in which they earned an automatic bid. After an incredibly successful year, they were not able to compete in the national competition.

When the dance team learned they would be packing up and heading back to Baldwin, almost every member began crying. Senior Cristy Fereira never imagined her last season would end like this. The news was hard to take in, but she leaned on her teammates for comfort.

“My time on the Baker Dance Team was definitely one to remember. It was the best decision I ever made,” Fereira said. “I learned from every single person on the team, I grew as an individual and I met friends that will last a lifetime. This team wasn’t just a team, I consider them my family.”

Senior Daniel Griese was making lunch at home when his phone started blowing up with notifications. Group chats with his track and field teammates filled with messages of shock and sadness. No one could believe this was happening.

Unfortunately for Griese and many others, the last season as a Wildcat athlete was cut short. Though disappointed, Griese is able to appreciate the time he had.

“I am honored that I had the opportunity to meet the people that I never would have if it wasn’t for Baker athletics,” Griese said. “It was a great honor and privilege to represent as a Baker track and field athlete.”

A glimmer of hope for spring athletes came when the NAIA announced it would be discounting the Spring 2020 athletic season and offering spring athletes one extra year of eligibility. Some seniors have considered coming back next year to have a chance to participate in their senior seasons, but many have jobs and other plans already lined up for post-graduation. Being in college another year may delay these plans, and some students are ready to move on to the next stage of their lives. Not knowing how financial aid and scholarships will work also makes the decision to stay tough.

For some seniors, though, the idea of being reunited with their teammates and friends outweighs the uncertainties. If everything aligns academically and financially, senior Bailey Pattin plans to return for his last season of baseball that was cut short. With his brother being a freshman on the team this year, Pattin was looking forward to sharing the field with him for a full season.

“This has been the only time [my brother and I] have ever gotten to play side by side as teammates, so getting another chance to do that would be incredible,” Pattin said.

Going from being at practice, competing or spending time with teammates every day to suddenly having no team activities is a big change. Though the spring may not be every sport’s conference-play season, all teams at Baker rely on off-season training and games or competitions to stay in shape year-round.

Since most gyms have closed and citizens have been ordered to stay home, student-athletes have had to improvise. Going on runs and completing at-home workouts have been the main form of exercise for those in quarantine. Junior Abby Cox has found creative ways to stay active and keep her softball skills up.

“I found a couple workouts I have been doing at home, and occasionally I will go on runs with my grandma’s dog or ask my brother to play catch,” Cox said.

Being ready to step back on the field when the time comes is motivation to work hard right now. “I know that everyone is going to come back hungry and ready to pick up where we left off. We want to finish what we started before all this happened,” Cox said.

Being apart has not stopped athletes from video chatting, calling and texting with their teammates. They have found ways to feel connected even when they cannot be with each other physically. Participating in challenges on social media has created an online atmosphere for athletes all over the world to connect. Some teams have even had meetings on Zoom so everyone can be present and check up on each other.

“We have weekly zoom meetings to stay in touch, and some of the team members plan to choreograph dances for all of us to learn so we can stay dancing together,” Fereira said.

The abrupt ending for spring athletes is a testament to the notion that no one truly knows what the future holds. “You should compete every chance you get like it is going to be your last. Enjoy what is in front of you and make the most of it because anything can happen,” Griese said.