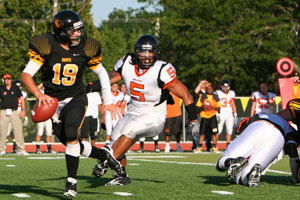 The Baker football team is looking to bounce back from losing its season opener to Ottawa University and start off conference play with a win against No. 10 Missouri Valley College.

The Wildcats host MVC in their home opener at 6 p.m. Saturday at Liston Stadium.

Head coach Mike Grossner knows his team will need to cut down from the 16 penalties, for a total of 144 yards, against OU in order to have a chance at defeating Missouri Valley.

“You can’t win games with 16 penalties,” Grossner said. “They just stop drives and continue drives for the other team.”

The penalties stalled a number of drives for the Baker offense against OU, but quarterback Zach Faust was still pleased with how the offense progressed throughout the game last week.

“We really started to move the ball well in the Ottawa game,” Faust said. “We just need to cut down the penalties and we definitely need to get better in the running game.”

Faust completed 27 passes for 363 yards and a touchdown despite rotating in and out with freshman Jake Morse for the first two-and-a-half quarters until Morse left with a concussion.

Missouri Valley shut out Baker for the first three quarters of last year’s game in Marshall, Mo., and is considered to be one of the top defensive teams in the HAAC.

Grossner is expecting more from the running game to help out Faust and the wide receivers against MVC.

“They are very good against the run,” Grossner said. “We’ve got to establish the run and then we can spread the field and do our thing. I think we have to focus on ourselves and get our playmakers into position to make plays.”

Defensively, the Wildcats are hoping to have another solid performance from defensive back Colton Miller, who was named the Victory Sports Network Defensive Player of the Game last week.

“It meant a lot, but I mean, we lost,” Miller said. “So, I didn’t want individual awards for the whole team not playing well.”

The defense will face a different style of offense in MVC compared to the passing attack they saw from OU last week.

Losing the game to OU last week was disappointing for Baker, but Grossner believes the only thing the team lost in the game was a chance at an undefeated season.

“Mo. Valley is a very physical football team,” Grossner said. “They got great athletes. Our guys got to get refocused quickly and we’ll watch the tape on what we did wrong. We got to get ready for our conference.”